Delicately Intimate What They Had an Emotional Powerhouse

After her mother Ruth (Blythe Danner) leaves the house to walk the streets during a raging snowstorm, California chef Bridget (Hilary Swank) rushes home to Chicago with her college-aged daughter Emma (Taissa Farmiga) along for the ride to help find her. When she arrives at the airport her brother Nick (Michael Shannon) lets them know mom’s been found and is currently at the hospital with their father Burt (Robert Forster). But their problems are far from over. Ruth’s memory loss and dementia due to Alzheimer’s is reaching the point where maybe she should no longer be living in the family home. Additionally, Burt might not be the best person to be caring for her.

Nick has found a place he thinks is perfect for their mother but he needs Bridget to convince their dad to sign the paperwork so she can get a placement. If Burt refuses, he then hopes his sister will see the bigger picture and make the decision for him. Bridget can do that because her parents gave her power of attorney back when Ruth was initially diagnosed. But as she’s been living in California she wants to assess all that’s happening and try to do what’s best for everyone before she makes a decision, this period of review angering her brother as he doesn’t understand why it’s taking his younger sibling so long to reach what he views is the only logical conclusion.

Writer/director Elizabeth Chomko’s What They Had is magnificent. Incredibly acted by its stellar all-star cast, most notably the core quartet of Swank, Shannon, Danner and Forster, the movie manages to avoid nearly every “family dealing with illness” cliché one could ever imagine. Instead, Chomko grounds her debut drama in ways that are frequently astonishing, the inherent humanity sitting at the core of the narrative she has so fastidiously constructed revealed layer-by-layer as events progress. Unlike the recent Still Alice, which was admittedly also nicely acted and won Julianne Moore a well-deserved Academy Award, this effort eschews melodramatic treacle in order to achieve something deeper, longer-lasting and far more memorably intimate. In short, this is one of 2018’s best motion pictures, one I hope people take the time to search out and see.

Inspired by her own grandmother’s battle with Alzheimer’s, Chomko doesn’t let cheap sentiment slip itself inside her story. Instead, she chooses to showcase the truth. Sometimes it’s shockingly funny, uproarious laughter birthed from almost unimaginable trauma. Sometimes it’s heartbreakingly upsetting, the unrelentingly brutal way the disease attacks its intended victim causing unfathomable hardships every member of the family must find a way to deal with. This psychological minefield can also bring people together in ways they maybe never thought possible beforehand, each step of the journey its own impenetrable mystery that needs to be solved before the next footstep in the sands of time can be taken.

Chomko knows all of this because she lived through it. As such she doesn’t sugarcoat any piece of this drama. Watching Bridget, Nick and Burt try to come to an agreement as to the best course of action as it affects Ruth put more than a few lumps in my throat, all of their discussions and disagreements coming from a place of love and concern which allowed them to resonate on even deeper level than they would have otherwise. These moments can explode with humor at the most unforeseen yet also the most naturalistic of instants, things just as quickly shifting back to tearful melancholy or outright grief at the drop of the hat.

As stated, the acting is universally sublime. Swank, the holder of two Oscars for Boys Don’t Cry and Million Dollar Baby, delivers one of the finest performances of her career, the lived-in magnificence of her deeply passionate and multifaceted work as Bridget absolutely incredible. This is made even more impressive considering all that Chomko asks of her. Bridget’s indecisiveness as to what she should do isn’t an easy thing to portray, those years of constantly being told by her conservatively Catholic father about what she should be doing with her life leading her to constantly second guess just about every decision she makes. Swank brings a stirring, confident rigidity to the story that’s overflowing in emotional permutations, all of which adds an additional layer of believability to the proceedings that give it additional weight and magnitude.

Danner might have the most difficult task, forced to showcase Ruth’s declining mental state without allowing her performance to become too flamboyantly showy, too overtly sentimental or too artificially constrained for it to resonate in a meaningful way. The actress manages a complicated balancing act where she navigates through a myriad of tight emotive corners and in the process makes her character grow in powerful majesty as she pushes through toward the tragic exit of this cryptic psychological maze. It’s a beautiful, elegantly lithe performance that builds to a stirring moment of intimacy between mother and daughter the left me a euphoric mess of cascading tears and quiet laughter, and I can’t imagine this story being told without her being a part of it.

Shannon and Forster and equally up to the challenge, each finding a way to give their respective character a magnetic vibrancy that’s utterly unique to them and to no one else. The former rarely gets the chance to be as funny as he is here. At the same time, by finding the humor in this situation Shannon allows Nick’s anger and rage to have a ferocious energy that’s captivating in its jarring suddenness. As for Forster, he’s nothing short of perfect. The selflessness of Burt’s unwavering love for Ruth is tinged with a form of patriarchal male privilege coupled with a healthy dollop of Catholic guilt that’s far more nuanced than I would have thought possible. It’s an endearing turn that in the hands of a lesser actor could have been didactic and off-putting, Forster finding the innate humanity of the character with hypnotic ease.

It’s Chomko’s script that might be the true revelation. Having gone through my own family travails when my beloved great-grandmother fought against Alzheimer’s when I was a freshman in college, What They Had spoke to me with such astonishing clarity I almost couldn’t believe it. Chomko constructs these characters and their situations in ways that are refreshing in their candor and specificity. I saw facets of my own family’s story splashed right there up on the screen, and it is that glorious ability to tap into the viewer’s everyday life that ultimately gives the film its undeniable majesty. As I said earlier, this is one of 2018 best films. See it at once. 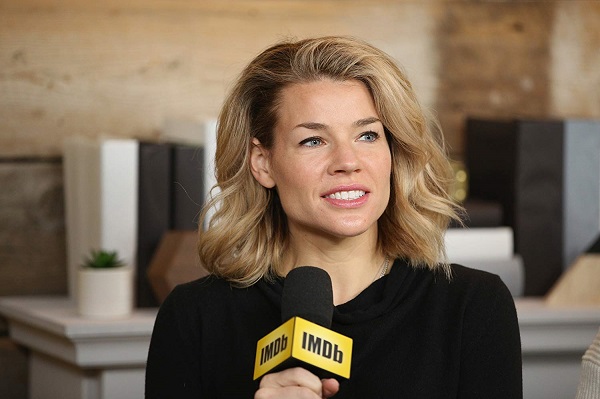 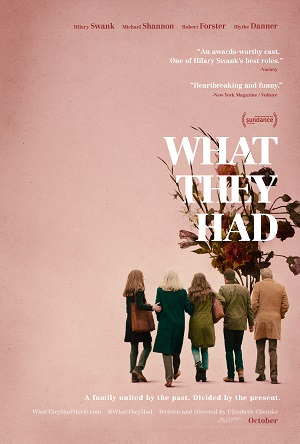