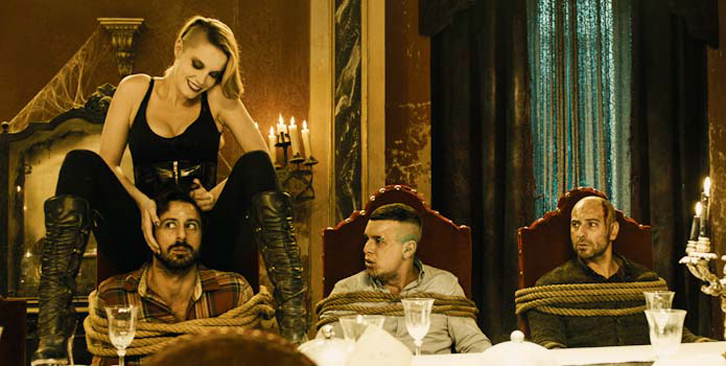 Gorily Eccentric Witching an Import Worth Bitching About

Wanting to be a better father to his son Sergio (Gabriel Delgado), José (Hugo Silva) has the not-so-bright idea of staging a downtown midtown jewel heist. When things go spectacularly wrong – one of his crew, dressed up as SpongeBob Square Pants, no less, ends up with a few more holes inside his carcass than his yellow cartoon doppelgänger typically sports – and suddenly he’s on the run, his kid happily by his side.

A hijacked cabbie and a kidnapped banker later, José, Sergio and the remaining member (Mario Casas) of their ragtag group of thieves are in the secluded and lonely border town of Zugarramurdi, a small enclave known for its history of witchcraft. It is here they run across cagey matriarch Maritxu (a terrific Terele Pávez) and her small coven of like-minded, spiritually craven compatriots. Like-minded, save her willful granddaughter Eva (Carolina Bang), the youngster infatuated enough with the dashing José she might be willing to leave her sorceress brethren behind just as long as he’ll sweep her into his arms and kiss her passionately.

Overlong and oddly paced, prone to losing focus, Spanish firebrand filmmaker Álex de la Iglesia’s (The Last Circus, The Day of the Beast) latest Witching & Bitching is nonetheless a gloriously grotesque and bloodily silly genre mishmash that’s like the giddy bastard stepchild of Quentin Tarantino’s Reservoir Dogs, Robert Rodriguez’s From Dusk Till Dawn and Dario Argento’s Suspiria. It is a comedic, gore-drenched, blatantly misogynistic free-for-all that manages to emasculate its male characters at the exact same time it marks them as superior to their female antagonists.

More often than not it is also remarkably entertaining, whether that is in spite of its imprecise, borderline disgusting, sensationalistic narrative shortcomings or instead because of them I cannot say. In his typical, fluidly controlled and over-the-top style, de la Iglesia manages to make sense of all this chaos and absurdity far more assuredly than most would anticipate, making watching the film an easier experience than it has any right to be. Even when subplot upon subplot upon subplot crashes into the middle of the proceedings (José’s ex-wife and a pair of bumbling police detectives are the least of the extraneous characters who find themselves in the middle of things) the director maintains complete control, the blackly comic funny bits outweighing the negative elements by a decent margin.

Things ultimately come to a head during a moonlit pagan mass of some sort where Sergio is the prime target in a transformational event the less said about the better. It is here where de la Iglesia’s sensibilities finally get the better of him, at least partially, the climax feeling as if it were pulled from genre favorites as wildly disparate yet oddly similar as John Carpenter’s Big Trouble in Little China and Ronny Yu’s The Bride with White Hair. It’s excessive in the extreme, and any chance the director might have had to make some sort of overarching satirical points about gender, sexism and male-female inequality is lost in all the special effects laden pandemonium.

At the same time, Witching & Bitching cannot be dismissed entirely. Silva is a strong, magnetically masculine presence, while Bang is a ferociously sexy force of nature impossible to take your eyes off of. The great Carmen Maura pops up in a key role that must be seen to be believed, giving things more complexity and nuance than they by all accounts deserve. But don’t get me wrong, this is as macabre and as disgusting – both good things – a piece of genre entertainment fans of this type of thing could hope to see this year, de la Iglesia proving once again he’s a Spanish filmmaker of singular sensibilities worth continuing to keep an eye on. 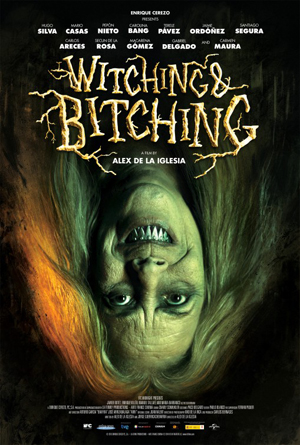