Intellectually imaginative 8-year-old June (voiced by Brianna Denski) and her doting mother (Jennifer Garner) spend each evening building Wonderland, a magnificent amusement park with all sorts of incredible rides and astounding sights dreamt up by the two of them in meticulous detail and engineered to precise specifications. It is a world where science and magic comfortably intermingle, all of it run by the charismatic Peanut, a friendly chimpanzee who takes great pleasure in bringing every attraction and ride to life.

It’s all just fantasy, of course, but when June’s mother gets sick and has to leave home to get an experimental treatment, the young girl finds herself drowning in anger, grief and emotions so complex she doesn’t know how to deal with any of them in a rational manner, forgetting all about building Wonderland in the process. Her loving father (Matthew Broderick) does the best he can, thinking that sending his daughter off to a mathematics summer camp with her best friend Bunky (Oev Michael Urbas) will help brighten her mood. Yet June can’t bear to be apart from her dad, not for a moment, especially right now, and she escapes out of the bus and into the local woods intending to walk back home to be with him whether he wants her there or not.

All of that is pretty serious stuff for an animated kids film from the folks at Nickelodeon. Safe to say, once June goes into the forest things get suitably nonsensical, the girl ending up smack-dab in the middle of her imagined playground of Wonderland to discover the park in ruins, Peanut (Norbert Leo Butz) missing and his helpers the furry blue bear Boomer (Ken Hudson Campbell), the efficient and fastidious boar Greta (Mila Kunis), the safety-conscious porcupine Steve (John Oliver) and the park’s maintenance experts Cooper (Ken Jeong) and Gus (Kenan Thompson) all at a collective loss as to what they should be doing in order to revert things back to the way they once were. It’s as if the youngster has wandered right into the middle of her own imagination, like she’s stepped out of reality into a weirdly surreal neverland, the future welfare of this world she and her mother created suddenly dependent on whether or not she can conquer her own all-encompassing grief.

It’s honestly heady stuff at times, writers Robert Gordon (Galaxy Quest), Josh Appelbaum (Teenage Mutant Ninja Turtles) and André Nemec (Mission: Impossible – Ghost Protocol), the latter two responsible for the finished screenplay, planting some very big themes and ideas smackdab in the middle of a colorfully exuberant computer animated adventure. Concepts of grief, regret and depression play a huge part in the proceedings, the reasons for Wonderland’s downfall directly due to June’s inability to process any of her feelings relating to her mother’s illness. There is a thread of distinct sadness that permeates every single story beat, and for a studio known more for stuff like The SpongeBob SquarePants Movie and Rugrats in Paris: The Movie this is an unexpected turn of events to say the least.

Not that this is some serious drama unsuitable for children. Just the opposite. The film is a colorfully indulgent extravaganza that shares quite a bit in common with another Nickelodeon favorite, Jimmy Neutron: Boy Genius, and much like that one this story, too, features a whip-smart youngster who utilizes her brain first, her empathy for others second and doesn’t resort to anything akin to brawn until all other options have been exhausted. Additionally, this crazy fantasy-adventure features a bizarre series of visual absurdities (including legions of formerly stuffed chimpanzee dolls dubbed “Chimpanzombies” out to dismember the park) that are so psychedelic one wonders if the animators and writers might have been utilizing mind-altering, and not altogether legal substances when they initially dreamt it all up. It’s the kind of stuff kids tend to go wild over and adults pray they won’t get an ear-splitting migraine from sitting in the theatre trying to endure, whether that’s a plus or a minus a matter of individual taste.

For my part, while I liked the Inside Out meets The Wizard of Oz meets Up character-driven elements, and while I appreciated the ambitions driving June and her Wonderland friends towards success, it’s all so hyperactively paced and so frenetically animated I can’t say the film as a whole left me satisfied. It all became a visual blur at various times, and it was only when the narrative slowed down to focus on individual character interactions that I ever found my interest piqued and my emotions fully engaged. There is a point to this story, and I loved many of the moralistic life lessons the filmmakers were trying to get across to the younger members of their audience. But the overblown razzle-dazzle, no matter how well animated, tends to dilute all of that quite substantively, and I’m not altogether certain all of them are going to get through as intended amidst all the lively zaniness.

I do think kids will enjoy Wonder Park, more than likely quite a lot. I also think there are a number of positives making it such that parents shouldn’t feel any reticence if they choose to let their little ones give the film a look. As for whether they should as well, that I can’t answer. Personally I think the plusses almost outweigh the minuses, emphasis on “almost,” and because of that I’m not sure what adults are going to think about any of what transpires. An imaginative mixed bag is still a mixed bag, and for anyone over the legal driving age this might be one animated attraction not worth standing in line in order to ride. 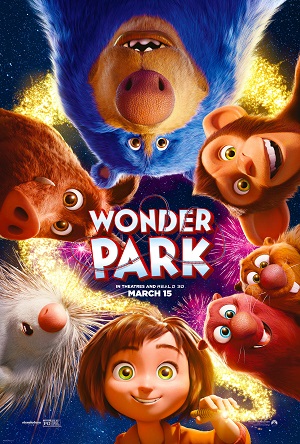