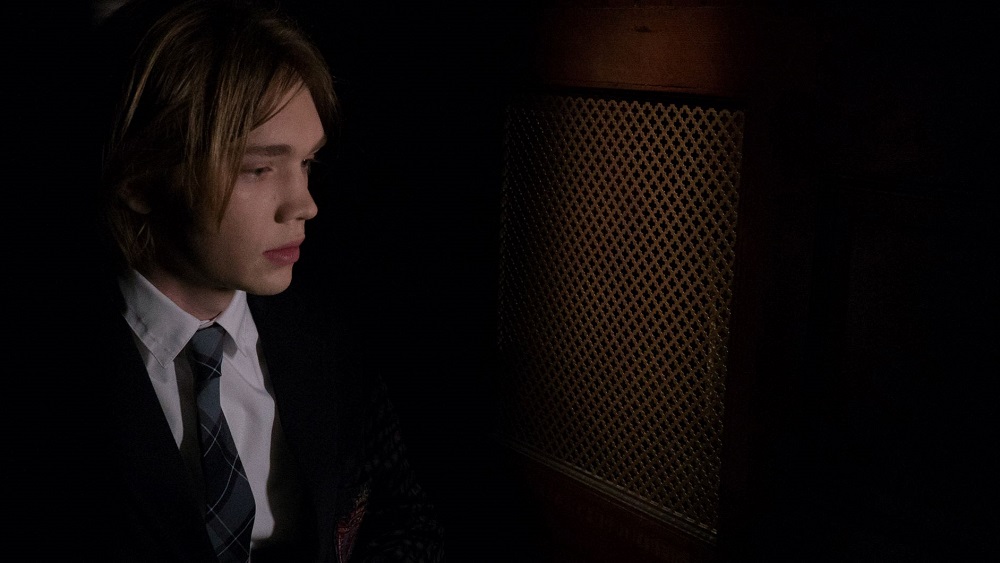 I’m having a polarized love-hate reaction to director Thor Freudenthal (Diary of a Wimpy Kid) and screenwriter Nick Naveda’s (Say You Will) ambitious, if at times oddly schmaltzy and saccharine, adaptation of author Julia Walton’s best-selling young adult romance Words on Bathroom Walls. Hate, because it beat me over the head with its more overtly melodramatic tendencies and oftentimes felt blatantly emotionally insincere. Love, because the performance from star Charlie Plummer is nothing less than stellar and because of the frequently innovative and imaginative ways the film tackles some incredibly tough subject matter.

So it’s a mixed bag, and while part of me wanted to throw whatever might have been in reach during some of the more odiously maudlin moments, there were almost near as many instances where I was fighting back tears and wishing I could give all involved with the movie’s creation a thankful hug. Freudenthal keeps many of his more histrionic and immature sitcom sensibilities in check, while Naveda’s script often approaches the story’s core subject matter revolving around living and dealing with mental illness with intelligent respect.

At the same time, some sequences simply do not work. The filmmakers drown a few of the more pivotal scenes in syrupy treacle, allowing the inherent melodrama to feel more like a second-rate episode of “One Tree Hill” or “Dawson’s Creek” from the late 1990s or mid-2000s, giving things a CW tween soap opera veneer that borders on insulting. I felt like some of the messaging was slapping me in the face instead of stepping back to allow the authentic human story to play itself out in a manner that could be construed as genuine.

Thankfully, Freudenthal has an ace in the hole, and that’s Plummer. Proving his turns in Lean on Pete and The Clovehitch Killer were not flukes, the young actor cements himself as a tremendous talent great things can be expected of every time his name is part of the cast list. Plummer mines thorny psychological territory with skillful aplomb, showcasing a multifaceted internalized gracefulness that’s outstanding.

The core plot revolves around high school senior Adam (Plummer), a youngster with dreams of going to culinary school who is devastated when he is expelled after a psychotic episode in chemistry class. After being diagnosed with schizophrenia, the teen begins taking an experimental drug to help quash the hallucinations that have frequently made his life unbearable. With the support of his devoted mother Beth (Molly Parker), Adam enrolls in a local Catholic school to finish out the term, doing his best to follow the instructions of his doctor and do whatever it takes to graduate.

The romance portion of this drama is provided courtesy of a kindhearted and highly intelligent classmate named Maya (Taylor Russell). She takes an instant interest in Adam, and as hard as he tries to keep a low profile and not let anyone get too close, worried they won’t understand what is he is dealing with, this young woman is determined to become his friend and confidant. Things blossom from there, complications arising after Adam stops taking his medications. There’s also an additional subplot involving Beth’s potentially duplicitous boyfriend Paul (Walton Goggins) that could cause unforeseen impediments to the young man’s goals for the future.

The showier aspects of the film, namely the way Freudenthal depicts Adam’s hallucinations and his utilization of actors AnnaSophia Robb, Lobo Sebastian and Devon Bostick who portray the physical manifestation of three of them, are a mixture of surprisingly sensitive and cartoonishly disingenuous. There are moments their appearance in the teenager’s life works magnificently, while at others they shoehorn bits of comic relief into the proceedings when they are least welcome. It’s a delicate balancing act that the filmmaker isn’t able to walk, and it’s only courtesy of the collective strength of the performances that the motion picture doesn’t end up falling flat on its face.

Andy Garcia has a few brief moments as the school’s priest that are strikingly affecting, the veteran actor sparing with Plummer with an empathetic naturalism that’s superb. The film is also winningly shot by Michael Goi (Mary), the cinematographer giving things a sheen of ethereal uncertainty that fits the material incredibly well. Parker is also worthy of special mention, her performance slowly and subtly sneaking up on me in ways I didn’t see coming.

Comparisons to Ron Howard’s Best Picture-winning A Beautiful Mind are likely inevitable. To Freudenthal’s credit he does cut his own path with somewhat similar material. He maintains a youthful focus that suits Adam’s story nicely, the love story between the teenager and Maya having a comforting maturity that’s pleasantly endearing. But both films do tend to drip into sentimental pabulum at inopportune moments, however, making them far more alike than either would likely care to admit.

Still, my reservations about certain aspects notwithstanding, Words on Bathroom Walls is far more effective dealing with its tough, complex subject matter than I initially anticipated it was going to be. Freudenthal and Naveda deserve praise for tackling Walton’s source material with confident authority, and when that’s coupled with Plummer’s star-making performance, the film rises to a level of overall quality that cannot be ignored. 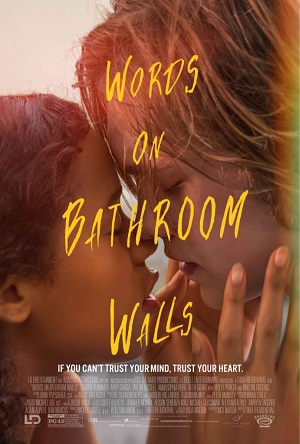