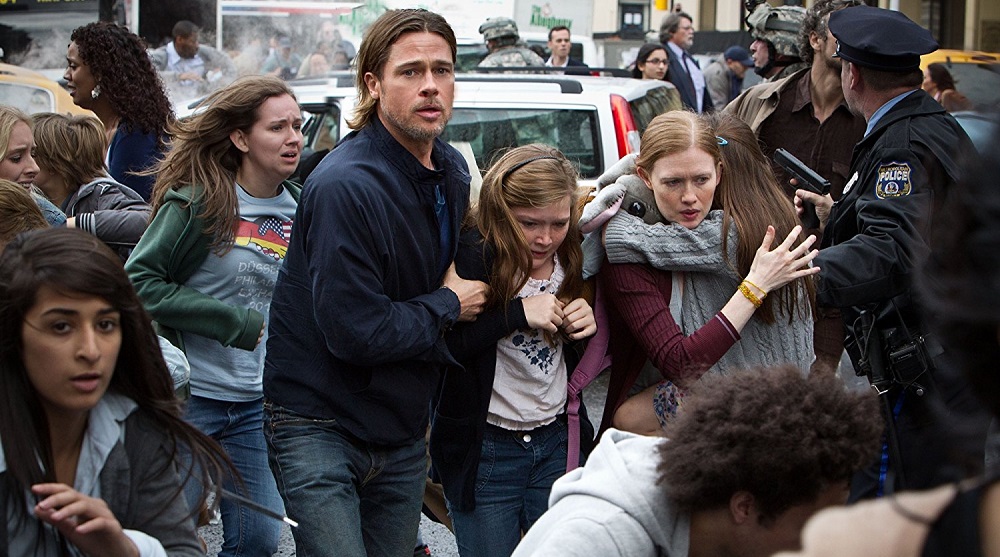 I have not read author Max Brooks’s World War Z: An Oral History of the Zombie War. I cannot comment on how director Marc Forster’s (Quantum of Solace) adaptation World War Z, scripted by Matthew Michael Carnahan (The Kingdom), Drew Goddard (The Cabin in the Woods) and Damon Lindelof (Prometheus), with a story by Carnahan and J. Michael Straczynski (Underworld: Awakening), compares. But according to those I know and trust the only thing the movie version has in common with its literary counterpart is the title and the fact it treats a zombie outbreak as a universal pandemic, otherwise their similarities stop right there. 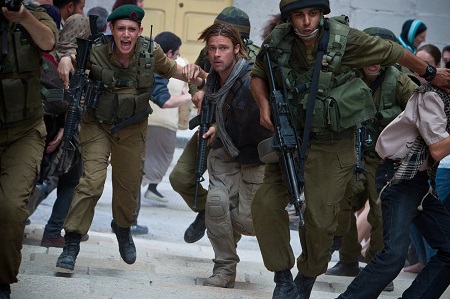 I’m okay with that. I got a major kick out of World War Z, this zombie-centered procedural playing like an adrenalized B-grade reinterpretation of Contagion or The Andromeda Strain and I can’t say I was bothered by that one little bit. The movie hits the ground running and then refuses to let up, moving along with pinpoint precession while it builds to a quietly chilling conclusion that I felt was emotionally honest refreshingly humanistic. In an age where bombast and chaos rule supreme (see Man of Steel, Star Trek Into Darkness or countless other similar scale blockbusters for more on that front), Forster and company go in a direction that’s intimate and personal instead, staying true to their main character’s central ethos in a way that’s somewhat surprising.

I understand this wasn’t always the case. The movie was delayed for over six months for extensive reshoots, apparently instigated by producer/star Brad Pitt, the whole last third completely rewritten and reengineered after test audiences didn’t respond kindly. A reported $200-million or more was spent on this behemoth, columnists suggesting Pitt and Forster locked heads and the way things in the film climax have more to do with the former than they do with the latter, the director practically given his walking papers if some reports are to be believed.

But I can only talk about the movie itself, and whatever troubles there might have been and however chaotic, behind schedule and over budget the shoot might have proven to be, there are precious few signs of this madness as for as the finished product is concerned. The movie moves with precision and tenacity, its strength of focus its single greatest asset. It has undeniable urgency, the air of tension hovering above the proceedings enough to keep me happily glued to my seat for nearly every second of its almost two hour running time.

Not that all is perfect. Character development takes a back seat to all the world-shattering zombie Armageddon, the central concept of former United Nations investigator Gerry Lane (Pitt), dragged back into service to investigate the outbreak’s beginnings, longing to get back to his beloved wife (Mireille Enos) and kids (Abigail Hargrove, Sterling Jerins), not exactly complex. What’s more, there are times as Lane trots around the globe, going from Korea to Israel to Nova Scotia in what feels like the blink of an eye, that it isn’t entirely clear what his qualifications for this assignment are and why he’s seemingly the only one on the planet capable of succeeding. While his observational skills are second to none it isn’t like he’s a trained soldier (he could be, I guess, but nobody ever says so) or a super-smart scientist (something he is continually upfront about), so how he’s the key cog in solving the riddle of the Zombie Apocalypse are tenuous at best. 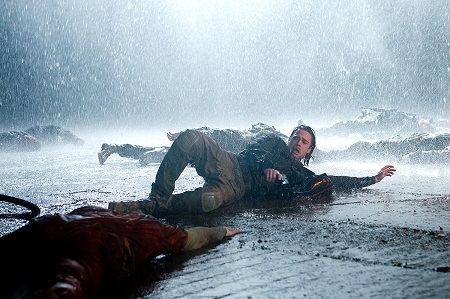 Be that as it may, this film worked for me. Lane thinks on his feet and makes decisions on the fly, never wavering from his mission while still holding out hope he can find an answer that might be the key to helping his family live on. The movie comments on zombie conventions and then gleefully subverts them, one one-handed survivor in particular going against the grain of genre clichés in a way that feels giddily and gleefully daring.

But the best thing about World War Z is how willing it is to get quiet, how open it is to slow things down and not let events get overrun by the spectacular. While there are some gigantic moments, while certain sequences of zombie chaos, most notably an invasion inside a walled-off Israeli stronghold, are stunning, Forster, Pitt and company allow the movie to take breaths, allow it to grow quiet even as mayhem and madness do their best to overwhelm the proceedings. In a summer where destruction and devastation have ruled, the filmmakers here have had the temerity to craft a mega-budgeted blockbuster that remembers to keep the human element at the forefront, the heart of the piece beating with a strength and resilience I don’t just appreciate, I borderline love. 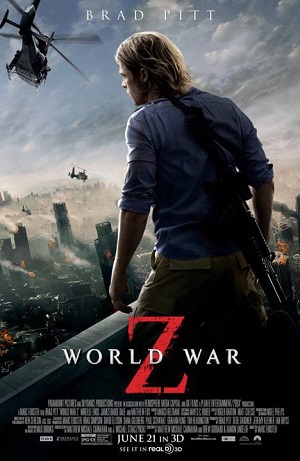