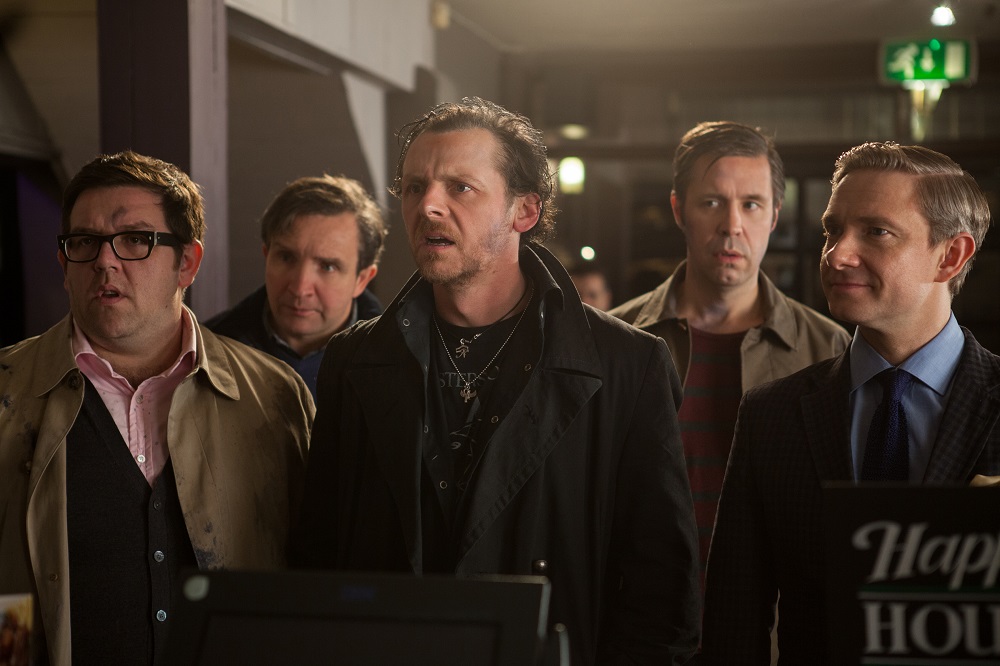 In 1990, a quintet of High School grads attempted to take on the ‘Golden Mile,’ a fabled roadway connecting 12 pubs in their small English township of Newton Haven, their goal to have one pint of beer in each establishment before returning home for the night. They failed. Over 20 years later, at 40 years of age, now living in London, ringleader Gary King (Simon Pegg) has decided to get the band back together, cajoling and coercing former compatriots Steven (Paddy Considine), Oliver (Martin Freeman), Peter (Eddie Marsan) and, most surprisingly, estranged best friend Andy (Nick Frost) to join him on a return trip home and another crack at the Golden Mile.

That’s the setup for The World’s End, the supposed finale to Pegg, Frost and director Edgar Wright’s so-called ‘Cornetto Trilogy’ of Shaun of the Dead, Hot Fuzz and now this(named after the frozen treat enjoyed by characters within each film), but to say more happens than just that is a fairly obvious understatement. With a script co-written once again by Pegg and Wright, the movie is a subversive trip down memory lane coupled with not-so-veiled commentary on consumerist culture and suburban homogenization. It is smarter than you initially think it is and more bracing in its darkly tragic satire than many might be willing to give it credit for, the resulting comedic jaunt an intelligently observational diatribe worthy of multiple looks.

So why am I not going crazy in my praise for the film? Well, part of that comes from the fact that, as wonderful as the script might be, as delicious as many of the performances are (Frost, in particular, is outstanding) and as delightful as many of the moments prove to be part of this does feel a little like a rehash. Elements inherent to both Shaun of the Dead and Hot Fuzz abound, many of Pegg and Wright’s more subversive satirical critiques also found in both of those two cult favorites as well. While I appreciate the maturity of this story, while I love that the evolution of these characters is freshly honest, never shying away from their insecurities and failings (both as a collective and as individuals), that doesn’t mask the feeling I’d seen much of this before. It just didn’t resonate as deeply as I hoped it would, everything building to a conclusion I respected more than I did anything else.

It also did not help that, while I laughed, I just didn’t find the movie consistently funny. As comedies go, in many ways I preferred the somewhat similar This Is the End over this, and as ragged and as unfocused as that star-studded end-of-the-world comedy might have been the one thing it was never short on was belly laughs. That flick had me grinning ear-to-ear all the way through, even the portions that fell embarrassingly flat still somehow managing to bring a light chuckle to my heart. Here, while I was never bored, while I felt the satire was more pointed, the characters better developed and the overall story filled with far more observational meaning, I just didn’t laugh all that heck of a lot, the comedic aspects never coming together as crisply as I’d have liked.

Even so, as a finished motion picture The World End is, from a technical perspective at the very least, a far more successfully realized achievement. Unlike its summertime predecessor, this one plays its apocalyptic tendencies far closer to the vest, its Invasion of the Body Snatchers meets The Quatermass Xperiment subplots more intriguing than initially meets the eye. The film is also light years visually ahead of anything Pegg/Frost/Wright have crafted before, veteran cinematographer Bill Pope (The Matrix) giving things a meticulously intimate look fitting the characters, the setting, the scenario and the satire all close to perfectly.

It should also be noted that the cast, unsurprisingly, is universally excellent, each adding just enough to the proceedings to give their respective moments an idiosyncratic personal touch that allow the resulting conflicts and mysteries to have far more meaning than they would have managed otherwise. Not only are all five of the lead actors terrific, the supporting players are equally outstanding, Rosamund Pike a particular scene-stealer portraying Oliver’s outgoing sister Sam and a woman with deep-rooted connections to both Gary and Steven.

I liked a lot about The World’s End, admiring the heck out of the pointed directness of Pegg and Wright’s acidic, uncompromising script. I also think the film features Frost’s best work to date, and many who look at the film as just another run-of-the-mill satirical comedy will miss out on the fact the actor is delivering as emotionally complex a performance as any 2013 has up to this point offered. I just didn’t laugh as much as I wanted to, I can’t find any other way to say it, and as great as a lot of this is there’s no denying that the filmmakers have walked down many of the cobblestones of this particular mile on at least two previous occasions thus following in their very own footsteps. 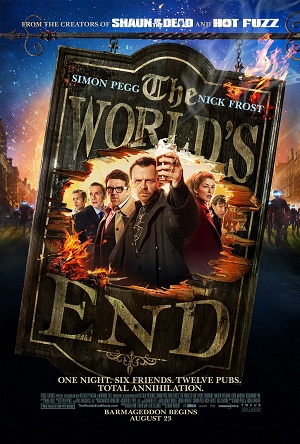