Spending the summer with his dad working at a local marina, a teenager begins to suspect his next-door neighbor might be a witch.

Here’s what I wrote about this one in my theatrical review back in May:

“With his parents recently separated, teenager Ben (John-Paul Howard) heads to the coast to spend the summer working for his father Liam (Jamison Jones) at a local marina. He is instantly smitten with coworker Mallory (Piper Curda), the pair forging a fast friendship that could easily blossom into more throughout the coming months.

While things appear to be going well, events take an ominous turn when Ben starts spying on his neighbors and begins to believe that something sinister is going on. The couple who live there are acting strange, the wife almost as if she were possessed by some demonic force while the husband wanders around in a glassy-eyed haze, appearing to forget the existence of his own two children. As Ben investigates further things grow incrementally more terrifying with every clue he unearths, and if he’s not careful the evil residing next door will start to consider him a threat.

I certainly give The Wretched filmmakers Brett Pierce and Drew T. Pierce credit for cribbing from the best when they crafted their screenplay for this solidly creepy, if not exactly consistently engaging, supernatural chiller. Like some chunky stew made up of the likes of Fright Night, The Witches, Pan’s Labyrinth, Rosemary’s Baby, Rear Window and any number of Hammer horrors from the 1960s and ‘70s, the main ingredients utilized for this dish are just so darn tasty it almost doesn’t matter that finished meal could have used a bit more seasoning. It’s a fun flick, and even if it didn’t leave a lasting impression that doesn’t mean I was any less entertained.

There is a pretty terrific bait and switch about halfway through, and I was equally caught unaware by what the directors end up doing to a character I was initially certain was going to be around for the majority of the story. I also like how the pair don’t spend a lot of exposition on the nature of the entity that’s taken up residence in the house next door to Ben’s. It’s evil. It’s hungry. It has strange, transformative powers. It has an affinity for the flesh and blood of children. It can cloud minds. Other than that, what else did I need to know?

A little more, of course, otherwise Ben couldn’t put the pieces of this mystery together while attempting to find a way to defeat this malevolent baddie. But the Pierces don’t overplay their hand, refusing to spell things out in a concrete manner, realizing that if they did it would dilute their film’s power to unsettle and terrify. They only reveal what’s important, keeping things close to the vest in hopes the shocking twist that comes just before the climactic act surprises, doesn’t feel laughably implausible and ends up being far more believable than it has any right to be.

Even with that being the case, I still felt there was something a little routine about what was happening to Ben. I could almost chart when and where all of the scare sequences were going to take place, and as much as I appreciate that all the clues leading to the film’s big reveal are sprinkled throughout so the viewer can indeed find them (assuming they’re observant enough to do so), that does not make the final act itself any less underwhelming. While well-staged, nicely edited and impeccably designed, considering how uncomfortably intriguing so much of the picture proved to be, I found it something of a minor letdown that the climax wound up being so energetically routine.

That last line of my original review still holds as The Wretched remains a solid B-grade horror effort that’s awfully easy to enjoy. I think I potentially liked it even more the second time around.

Extras for this release include:

I can’t say The Wretched is the most original or innovative horror movie I’ve ever seen. This disquieting mashup of Rear Window, Fright Night and The Witches hardly does anything unexpected, but that doesn’t make it any less entertaining. Brothers Brett Pierce and Drew T. Pierce handle the material with confident panache, their visual stylings consistently intriguing. As I said in my original review, this is a fun flick. I say check it out. 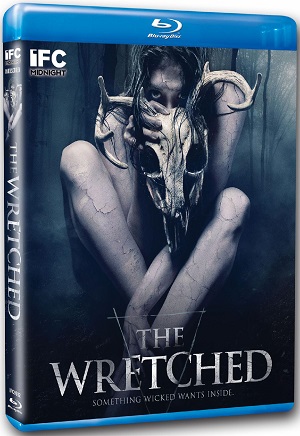