If you’d have asked me back in 1995 if I’d ever in a million years have imagined director Paul Verhoeven and writer Joe Eszterhas’ colossal NC-17 box office disaster Showgirls would become an enduring schlock cult classic spawning all sorts of debate, discussion, parodies, homages and flat-out copies, I’d have said you were nuts, and this is coming from someone who was defending the film (sort of) at the time of its original release! Make no mistake, considering its abysmal failure, there’s no way I could have surmised we’d still be talking about this one now, let alone seeing feature-length documentaries released chronicling its lasting cultural impact.

But here we are all the same. After a successful festival run and a brief theatrical release, director Jeffery McHale’s You Don’t Nomi now comes to Blu-ray. While I can’t say the film was worth the wait, I can admit that for as obvious as its points are and as straightforward as its thesis might be, this is still an entertaining effort that Showgirls fans will likely enjoy quite a bit. It’s fast-paced and never takes itself too seriously, it’s 90-plus minutes flying by so quickly I was almost a little shocked when the doc came to an end.

The most interesting and touching aspect of McHale’s effort is how hard he tries to rehabilitate star Elizabeth Berkeley, so much so it’s a shame she only appears here in archival interviews. He makes a pretty strong case that the “Saved by the Bell” actress didn’t deserve her ignominious fate, and while fellow costars with more established track records like Gina Gershon (who steals every scene she’s a part of in Showgirls; she’s flat-out incredible), Glenn Plummer and Kyle MacLachlan got out of this relatively unscathed, Berkeley saw her burgeoning career pretty much destroyed.

The other thing the director attempts to do is connect all the dots of Verhoeven’s expansive five-plus decade career and try to show how Showgirls fits in right alongside the likes of Spetters, Robocop, Basic Instinct, Starship Troopers and Elle. Most notably he spends a lot of time comparing this flop with his 1983 masterwork The 4th Man, and while I’m not sure all his points fit together, I did appreciate what it was McHale was attempting to do all the same.

But You Don’t Nomi isn’t going to win over many converts to the Showgirls fan club. It spends a lot of time with those already in the choir, and I also can’t say McHale covers some of the films more risible aspects (namely in regards to race) with anything approaching nuance or depth. Still, his documentary is pretty dang entertaining for the most part, and I’m certainly glad I sat down and gave the film a look.

Not sure what I expected with a documentary covering the somewhat confounding longevity and legacy of Paul Verhoeven’s NC-17 schlock cult favorite Showgirls, but I’m rather positive Jeffery McHale’s You Don’t Nomi was it. His film is preaching to the choir, which is fine, I guess, especially as I’m a member of the chorus, but it doesn’t really do a heck of a lot more than that. Still, his doc is worthy of a look, and even without any special features whatsoever, for fans of Verhoeven’s 1995 flop this Blu-ray, at the right price, might be worth picking up. 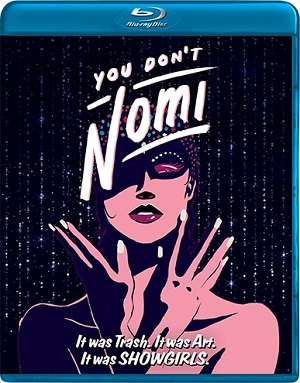