Heartwarming Miracle a Whale of a Family-Friendly Tale

Big Miracle is a heck of a lot more entertaining and enjoyable than I figured it was going to be before I stepped into the theatre. Inspired by the true story of three Gray Whales trapped in the Alaskan ice in October of 1988, the movie is a pretty straightforward and simplistic affair that never pushes the emotion or the inherently melodramatic nature of its narrative as much as it potentially could have. Director Ken Kwapis, back in Sisterhood of the Traveling Pants mode and thankfully as far removed from License to Wed or Dunston Checks In territory as you can get, does a nice job of keeping things under control, the resultant film a life-affirming spectacle I thoroughly enjoyed. 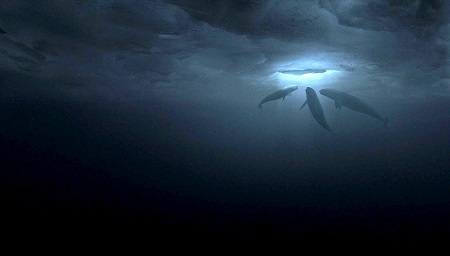 Granted, the framing device is a bit hackneyed and contrived. You’ve got Alaska newsman Adam Carlson (John Krasinski) breaking the story which of course leads to the arrival of his former girlfriend, Greenpeace spokeswoman Rachel Kramer (Drew Barrymore) arriving on the scene the moment she learns about the whales. Additionally, the phalanx of major network journalists that follow her there include Jill Jerard (Kristen Bell), a California personality that Adam has a major crush on. Mix in adolescent Alaskan native Nathan (Ahmaogak Sweeney), a kid trying to break free of his grandfather’s (John Pingayak) obsession with the “old ways,” and an oil baron (Ted Danson) who sees a public relations goldmine in helping the whales get to the Pacific, and you’ve got so many too-cute narrative elements it’s amazing they find any breathing room whatsoever in the confines of a 107-minute motion picture.

Yet somehow Kwapis and screenwriters Jack Amiel (The Shaggy Dog) and Michael Begler (The Prince and Me), working from the book Freeing the Whales by Thomas Rose, get it all to work. By keeping the focus on the main, heavily-covered central storyline, by mixing in the real-life exploits of Colonel Scott Boyer (Dermot Mulroney) and former President Reagan aid Kelly Meyers (Vinessa Shaw), the filmmakers keep the schmaltz to a minimum. Yes it can get a little silly, and sure the saccharine can at times break through the ice to moderately annoy, but overall this movie had me smiling from start to finish, and that’s a positive trait I’m not about to minimize. 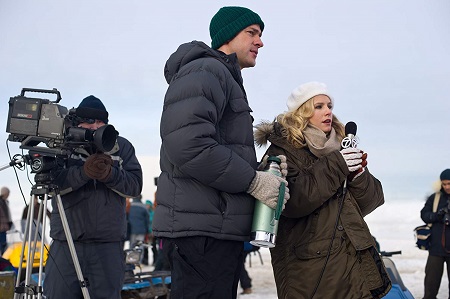 Barrymore can play a character like Rachel in her sleep, and other than a painful sequence with her insisting she has to climb into the water to be with the whales the actress has plenty of moments here that reflect an interior mellifluence that’s divine. Krasinski is also up to the challenge, and even though he’s not straying too far out of familiar territory (i.e. “The Office”) he still has charm to burn. But the real scene-stealer is Pingayak, the Alaskan newcomer energizing things with a wizened world-weary sagacity that’s profound. I couldn’t take my eyes off of him, and whether he is bickering with Sweeney or chanting prayers over the whales’ frozen prison he elevates the proceedings every time his face flashes upon the screen.

The final product is more like A Dolphin Tale than it is Fly Away Home or Never Cry Wolf, Kwapis not quite having the directorial chops to make this family-friendly feature anything more than an above-average diversion you’d find airing on Lifetime or the ABC Family channel once it leaves the theatre. Even with that being the case, Big Miracle struck a chord with me, and I can’t say its saga of resilience and faith in the face of unthinkable odds didn’t connect. I liked it, it’s a whale of a tale, and one viewers of all ages will almost certainly enjoy as well.