Dwight (Macon Blair) has been living off the radar for some time now. He’s been unable to put the pieces back together ever since his parents were murdered, becoming something akin to a homeless bum even though his loving sister Sam (Amy Hargreaves) would welcome him back into her life if he so desired to make himself a part of it.

The man responsible for the killing of Dwight’s mom and dad has been released from prison. He is there at the gates, watching him step into a waiting limo as if he’s leaving a nightclub after an evening of debauched reverie. Dwight follows, tracking him to an out of the way bar run by members of his family. Whether on a whim, whether by design, the hairy creature who once passed for a human being makes his way inside the building, hiding in the restroom with homicidal thoughts taking up the space where common sense used to ever-so tenuously reside.

Blue Ruin is a movie about revenge. It is about cycles of violence. It is about the hurt, resentments and insecurities that can build up over time leading to spur of the moment decisions which can have tragic repercussions overwhelming everything in their wake like an unavoidable emotional tsunami. It is a road trip that plunges its protagonist down an unthinkable rabbit hole of his own design, Dwight spiraling into a Joseph Conrad-like heart of darkness so terrifying escape can’t help but feel claustrophobically impossible.

Writer and director Jeremy Saulnier manages something of a startling high-wire act with all of this, revolving things around a character we know little to nothing about and, at first at least, don’t particularly care for. He is a grungy, nasty little man who has let himself fall to pieces, only the arrival of a local police officer arriving at his car door to tell him of his parents’ killer being released awakening him back up to the world around him. 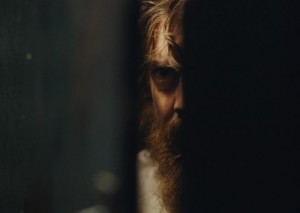 But at what cost? His first act is murder. His second is to unintentionally put his sister and her children’s lives in jeopardy. It is only then that he starts to reconnect to his lost humanity, becoming something of a minor heroic soldier in a fight against forces he hardly understands let alone feels capable of being able to stop. Dwight isn’t a whole human being, he’s barely a shell, thus relating to him is an oftentimes frustrating affair to be sure.

Even so, Saulnier did a magnificent job of keeping me interested. Blue Ruin is bewitching even as it bewilders, it’s Hatfield messing around with the McCoys sensibilities hard to dismiss and even more difficult to resist. Everything keeps building, effortlessly, with precision and passion, events steamrolling to an almost inevitable conclusion bathed in bullets and drowning in blood. I couldn’t take my eyes off of anything that was happening, and no matter how ominous or repugnant the turns might be, or how eccentric and anomalous the twists became, everything stayed refreshingly character-driven making my investment in the proceedings mean something disconcertingly tangible.

Blair is wonderful. His character is so cryptic, so ephemeral, so nondescript at the start the actor is thus under a ton of pressure to make him worthy of keeping an eye on even though there’s hardly anything of substance to latch on to. Dwight’s complex, wounded psyche is slowly healed, certainly, but said health comes at a massive price, the quiet, withdrawn loner only becoming whole as things escalate beyond all reasoning. Blair dives in, makes the man’s pain palpable right from the start, while his growing fear and paranoia over what it is his handiwork has unleashed is immediately recognizable. But it is his newfound confidence, his burgeoning resilience, that’s what ends up being most striking, the actor making all of this come to life with remarkable, almost effortless enthusiasm. 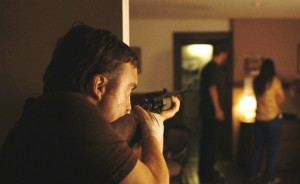 Does it all make sense? No, not in the slightest, the fact the authorities don’t ever catch wind of the chaos and carnage happening right under their nose is a bit on the silly side of things. There’s also the situation in regards to Dwight’s former High School best friend Ben Gaffney (Devin Ratray), a former soldier living a relatively solitary life who is only too happy to help one-time chum battle a bloodthirsty clan of redneck cutthroats. He gives his assistance with scary relish, allowing himself to become involved in a hellish situation with delight bordering on gleeful.

Yet Saulnier makes it work. In this surreal netherworld, the fact things become a game of cat and mouse between Dwight and his prey-turned-hunter and the police do not get involved seems oddly rational, while Ben’s advice to his pal is shockingly pertinent. Blue Ruin becomes something akin to a gothic horror story where yin and yang intermingle into something utterly unrecognizable, the filmmaker achieving a level of literate American filmmaking that borders on inspiring.