Victor (Colin Farrell) hides a secret agenda. Almost two years ago his wife and daughter were murdered and he was left for dead, the man responsible the faceless landlord of his New York apartment building who wanted them out no matter what the cost. In that time he has recovered from his wounds and infiltrated the gang responsible, so close to their leader Alphonse (Terrence Howard) he’s now considered an indispensable part of the team. 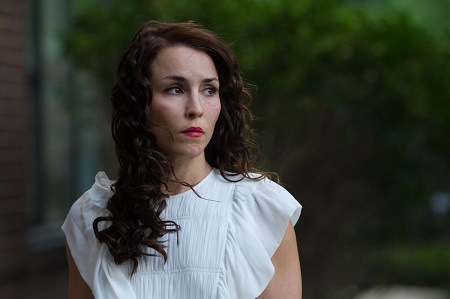 The facially scarred Beatrice (Noomi Rapace), the victim of a devastating car accident involving a drunk driver,  lives in the same complex as Victor, sharing a spacious flat with her loving (and still beautiful) mother Valentine (Isabelle Huppert). She shares glances and waves with this stranger across the way, the two connecting even if they’ve never spoken a word to one another publicly.

One day Beatrice works up the nerve to contact Victor. The two go out, sharing a couple of drinks and some polite conversation. One thing leads to another and the young woman asks this disheveled, if still sexy, man to accompany her someplace quiet. They pull up beside a relatively upscale neighborhood residence inside of which is the man who struck Beatrice’s vehicle leaving her life in shambles. She looks into Victor’s eyes and tells him she knows he is killer, that she has seen him strangle a man with his very hands. Now, and she will not take no for answer, she wants him to put his skills to work and his own agenda on hold, hoping he’ll enact a personal revenge for her she is not knowledgeable enough to get away with on her own.

That is the initial setup behind Danish director Niels Arden Oplev’s English language debut Dead Man Down, but it’s certainly not all that is going on or taking place within the confines of the finished film. The man behind the 2009 version of The Girl with the Dragon Tattoo has plenty of tricks up his sleeve, he and screenwriter J.H. Wyman (The Mexican) presenting a gritty, character-driven modern noir where up is down and nothing is ever what it seems. It’s a solid little thriller, one that takes its time to develop the principals, giving them reasons to connect and trust one another, and even if everything concludes in a rather familiar fashion that’s not too terrible a problem, the director hitting the requisite beats with a scruffy relish that fits the genre nicely.

It’s all very European, Oplev and Wyman making sure to flesh out Victor and Beatrice as much as they can before cutting to the chase and bringing everyone lurking inside the confines of the script’s labyrinthine layers together at the same time. Especially nice are Farrell and Rapace’s interactions with the luminous Huppert, the trio sharing a naturalistic rapport that belies the unavoidable chaos and bloodshed that’s tragically to come.

Things can get heavy-handed, Wyman’s script laying its cards on the table with way too much relish at times. A subplot concerning one of Victor’s friends (extremely well played by an underutilized Dominic Cooper) in Alphonse’s organization is obvious and underdeveloped, while another involving a bunch of Albanian thugs only feels necessary as it allows for some narrative sleight of hand during the climax. It should also be noted that, much like most modern noirs, issues of believability do come into play, New York once more turned into a bullet-riddled wasteland more akin to the streets of Tombstone circa 1881 than they are a modern 2013 metropolis.

Yet it works, mainly because Oplev treats his characters with gritty respect, never belittling their mutual thirst for revenge and their cathartic need for connection. Victor and Beatrice’s dueling stories intertwine honestly, one never undercutting the other making their growing need for the other’s touch worth rooting for, while the threat that it will never allow it to happen grows like a virus taking hold within the circulatory system hoping to shut it down forever. 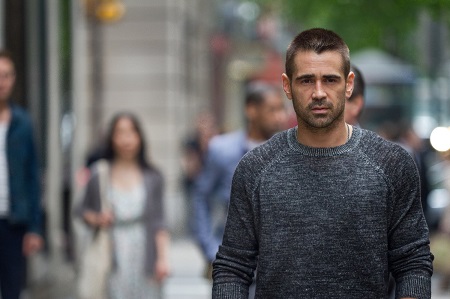 Much like his previous films, the director shows an exquisite eye for detail, understanding his world’s geometric shape inside and out. Paul Cameron’s (Total Recall) cinematography never feels rushed, each image blending into the next with a sophisticated symmetry that’s sublime. The movie plays much like vintage Sydney Lumet policiers of yore, and whether intentional or not echoes of Q&A and Prince of the City are omnipresent throughout.

I do doubt Dead Man Down will play as well for everyone as it did for me. Oplev takes his time to get to the finale, waiting to unleash his fireworks until the very last second. While the final confrontation is suitably dynamic, for some it will come as too little, too late, the character study of two broken souls looking to be repaired not what they were expecting to find when they plunked down cash to buy a ticket. For me, this movie captured my complete attention, the director’s Hollywood debut one I happily applaud.