In 1960 Father Thomas Riley (Lalor Roddy) and Father John Thornton (Ciaran Flynn) were sent by the Vatican to investigate and document strange goings on at a Magdalene Laundry in Ireland. The Mother Superior (Helena Bereen) in charge of this home for so-called “fallen women” (i.e. young women and girls who are both single and pregnant) is immediately dismissive of the two men who have entered her dominion and is positive they will not discover anything of interest. Yet both show remarkable persistence to try and learn why so many strange and horrifying things keep happening at the laundry, in the process uncovering a terrifying secret that will lead each of them to question the very fabric of the faith they purportedly proclaim to hold so dear. 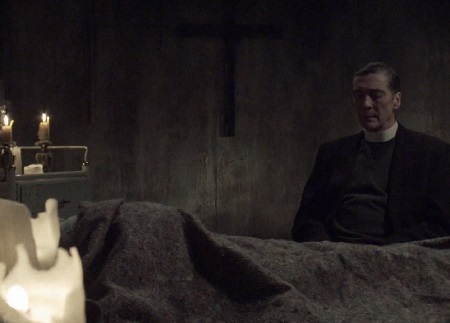 Newcomer Aislinn Clarke’s confident and sinister debut feature The Devil’s Doorway is a clever twist on the “found footage” subgenre of horror films, her movie more concerned with her three principal characters and their twisting moral ambiguities than it is in unleashing a bunch of nonsensical cheap scares. Not that the movie isn’t thrilling, the director doing a fine job of delivering the requisite bits of misdirection and visual subterfuge audiences have come to expect from titles like As Above So Below, Paranormal Activity and The Taking of Deborah Logan that are similar to this one. But Clarke ponders questions of faith, masculinity and female empowerment before anything else, and as such her nifty little low budget shocker digs under the skin in a way that’s far more unsettling than any of the jump scares that are liberally littered throughout her freshman offering.

There is something intriguing about the setup to this story. Father Riley and Father Thornton initially aren’t at this Magdalene Laundry to investigate any sort of reported wrongdoing. Instead, it’s a miracle they’ve been asked to chronicle, the statues of the Virgin Mary inexplicably crying tears of blood for no apparent reason. It’s not until they’ve begun their task, interviewed the Mother Superior and spoken with a few of the various girls and nuns in the laundry that they start to suspect there’s something even more unnatural taking place. Once the visions of ghostly children playing ominous games of hide and seek begin, all bets are off, especially when they end up leading the two men to a pregnant young woman seemingly imprisoned in the bowels of the laundry.

Clarke allows her film to take its time, the conversations between the two Fathers covering a massive amount of territory and, in the process, delicately reveals various character complexities giving each man additional layers of depth. As for the Mother Superior, it’s obvious she’s not exactly a paragon of virtue and pious faithfulness one hopes a woman who has devoted her life to serving the tenants of her professed religion would be. Yet there is something about the way in which Clarke and her co-writers Martin Brennan and Michael B. Jackson have constructed the character that is uncomfortably fascinating, and it’s clear the director doesn’t want this nun to come off as nothing more than a second-rate Nurse Ratched.

The overall excellence of the core trio of actors goes a long way towards helping the director keep her focus on the characters and their journey over that of any pointless sequences of shock and awe. Bereen has a focused intensity that had me on pins and needles whenever she was a part of a scene, while Flynn’s instinctive introspection allows the inquisitive Father Thornton to be a nice counterpoint to Father Riley’s grizzled, world-weary indifference to the job the pair have been sent out to accomplish. But it is Roddy as that latter character who is the reason this movie ends up having such an affecting emotional core. His faith-fueled battle, especially as he takes in the various human, non-supernatural horrors of what is happening inside the Magdalene Laundry has a knowingly withered complexity that’s deeply compelling. Roddy is excellent, the Grabbers and “Game of Thrones” actor delivering a transformative performance that I couldn’t help but respond to favorably. 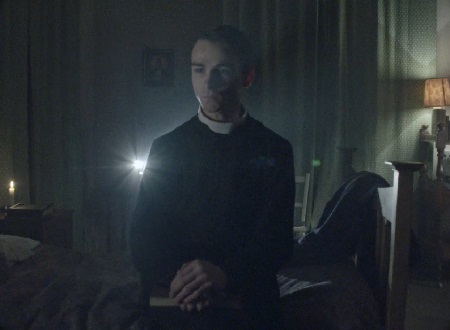 Things do eventually follow genre convention right down to the pair of Fathers having to climb through fissures in the earth into darkened catacombs where claustrophobic fear-induced paranoia is par for the course, but not before an unforeseen twist into The Exorcist territory with that discovery of the pregnant girl in the laundry’s basement. A lot of this is pretty standard stuff, and Clarke doesn’t veer too far off of a relatively familiar path. Still, Lauren Coe delivers a suitably creepy performance as the cellar-dwelling mystery girl, while an important scene involving Roddy and Bereen dealing directly with her and why she is being confined crackles with sinister electricity.

It all culminates as expected, and I can’t say Clarke manages to maintain tension and suspense for all of her debut’s brief 86 minutes. But it isn’t like the stuff in those underground catacombs fails to startle, and I really do like the fact that this film is more about characters dealing with a crisis of faith and how organized religion tends to minimize women to the point their innate human rights are systematically erased more than it does anything else. The Devil’s Doorway is a thought-provoking descent into spiritual madness and mayhem and I can’t wait to see what the talented Clarke might have hiding in the deviously dark corners of her imagination next.