What is there to say about The Expendables 3? More than I thought, less than is necessary and little that’s all that important, this capper to the 1980s-style brawny, star-studded action trilogy pretty much exactly what you expect it to be and nothing too much more. Creator and star Sylvester Stallone has rounded up the core group from the first two films, added Wesley Snipes, Antonio Banderas and Harrison Ford to the hero side and brought in Mel Gibson to dance and preen as the principal baddie. He’s also enlisted Twilight heartthrob Kellan Lutz, UFC champion Ronda Rousey, boxer Victor Ortiz and rising star Glen Powell to bring in a younger audience, hoping that they, along with a PG-13 rating, will make the film even more accessible to audiences across all age spectrums.

What he has not done, writing alongside Olympus Has Fallen scribes Creighton Rothenberger and Katrin Benedikt, is give them a scenario or a narrative worthy of the fuss. There’s nothing here that’s slightly original, which isn’t a surprise, of course, considering the types of Raw Deal, Invasion U.S.A., Delta Force and Cobra motion pictures this series emulates, but considering the sheer size of the cast (not to mention the two-plus hour running time) it’s more noticeable than ever this time. What in all honesty should be nothing more than a bullet-riddled tale of revenge ends up being so much less mainly because focus can’t be maintained and momentum is hard to come by, everything presented with an indifferent triviality that’s moderately irresponsible. 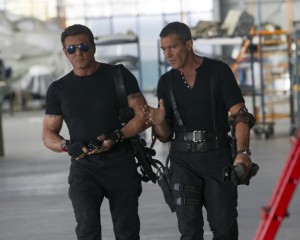 It does not help that the effects are bottom of the barrel, almost SyFy Channel-like in their second tier video game appearance, explosions and aerial dogfights about as exciting and believable as race between three-legged tortoises. It also doesn’t help that, in the pursuit of a PG-13 rating, the blood has been literally drained from the proceedings, the amount of gunfire, bullet holes, knifings and impalements virtually the same as previous outings only without the gooey red excretions that typically go right alongside such things. This has the effect of making the ultra-violence silly, tension and suspense vanishing all in the pursuit of making it easier for teenagers to buy tickets showing, once again, the disgusting hypocrisy of the MPAA as it pertains to the ratings system.

Yet, there are multiple points of light and jolliness in this monstrosity that hit me by surprise. The group’s first mission is to rescue Snipes from an Eastern European prison train, and once he’s introduced he dominates the first 30 minutes with charismatic, violently electric magnetism that’s infectious. Ford, taking over for the departed Bruce Willis as the team’s CIA contact, also seems to be having a blast, and while he’s barely in the film he makes the most of every scene and one-liner he’s asked to be a part of.

Then there’s Gibson, and while it’s not a shock he makes for a transfixing villain he still provides a nasty, ruthless punch to the proceedings that’s sorely missed whenever he isn’t around. He preens and prances his way through things with melodiously thuggish grace, and I can’t help but wonder what he could do in a more straight-forward action-adventure yarn portraying a similar sort of bad guy. As for Banderas, he’s a breath of fresh air, taking over the latter third of the picture portraying a character who in lesser hands would have been nothing short of insufferable. He’s the Puss-in-Boots meets Desperado wannabe Expendable, and as such he steals every moment and every scene he shows up in with stratospheric ease.

The plot is the type of total nonsense one expects, Expendables leader Barney Ross (Stallone) disbanding the main members of his mercenary unit when he learns former friend turned most reprehensible enemy Conrad Stonebanks (Gibson) is still alive and ticking and not six-feet under like he’d been led to believe. Turning to a younger group of killers (Lutz, Rousey, Ortiz and Powell) he thinks are even more disposable than his usual team he embarks on a suicide mission under the direction of CIA handler Drummer (Ford) to take Stonebanks down. However, when things go wrong it’s up to the older Expendables (Jason Statham, Jet Li, Dolph Lundgren, Randy Couture, Snipes, Banderas), along with Drummer and friendly mercenary Trench (Arnold Schwarzenegger), to set things right, old and new schools uniting to make sure justice is delivered and evil is vanquished. 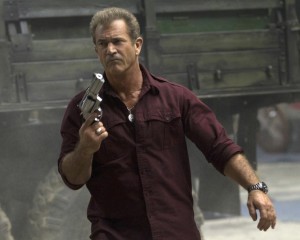 Why this takes over two hours I have no idea, the film illogically padded in order to allow newcomer Kelsey Grammer (don’t ask) a few choice one-liners and to let the youngsters (most notably Rousey) to show off their individual skill sets. Director Patrick Hughes, who did such a grand job handling all the mysterious, brutal dynamics of the spellbinding modern Western Red Hill, seems out of his elements here, The Expendables III having trouble maintaining momentum and energy even when tanks are firing and motorcycles are flying through the air.

Listen, you know what you’re going to be getting when it comes to The Expendables 3, so anyone buying a ticket shouldn’t be particularly shocked by the lo-fi ambiance of the visual esthetics or the third-rate nature of the script. Thanks to Snipes, Ford, Gibson and especially Banderas (with a notable assist from Schwarzenegger getting to ‘the chopper’), the sequel is hardly a waste of time, all of them adding moments of levity, charisma and fun to a movie oddly devoid of all three much of the time. All the same, I’m glad this series is ending because now I can go revisit the ‘80s favorites these have been aping and pretend like this half-baked trilogy never existed in the first place.