The insanely low budget found-footage WWII-era creature-feature Frankenstein’s Army posits what would happen if a Russian commando unit near the end of the war was on a secret mission behind German lines and discovered a mysterious factory run by none other than Dr. Viktor Frankenstein (Karel Roden). What they find is a labyrinthine maze filled with all kinds of monstrous creations, each designed to inflict carnage and mayhem but also leave just enough working human body parts intact to allow the mad scientist to craft even more bloodthirsty warriors made from a combination of human flesh and whatever else might be lying around.

Sprung from the mind of madman freshman director Richard Raaphorst (a former visual concept artist who’s worked on everything from Black Book to Beyond Re-Animator to Jackie Chan’s Who Am I?), Frankenstein’s Army is a frenzied, go-for-broke gore-filled hoot genre fans are going to adore. I had a chance to have a brief email conversation with the filmmaker before the film hit Blu-ray and DVD. Here are some of the highlights from that back and forth conversation:

Sara Michelle Fetters: What was the genesis for Frankenstein’s Army like? When did you know the ideas you were considering were viable?

Richard Raaphorst: I had several elements of Frankenstein’s Army in my head for a very long time, but to be honest, I’ve been inspired by machinery and industrial factories for as long as I can remember. When I was little, I traveled with my dad to his work in the middle of an oil plant. We got into one of those massive oil tankers and that hooked me. The size and sounds and smells of the machines were amazing to me. It was like a planet of machinery. The ultimate movie set. This I mixed up with another crush I had on a really beautiful illustrated version of Mary Shelley’s Frankenstein. I became totally in love with the art and started to make monsters in this style before I developed my own. Years later, somehow all the floating elements clicked together into one unified concept. The zombot was born!

Sara Michelle Fetters: Talk about the progression from making a trial short to coming up with the finished concept and script for a feature film.

Richard Raaphorst: For me, the shorts were more like living paintings. I actually painted the scenes, and then had a deep desire to bring them to life. Then, after shooting the shorts, I became even hungrier to invent more of this world, and this desire grew until I had a completely designed world with a robust history. I think I’ve designed a world in which I can easily make several movies with totally different characters because I created so many levels of it in my mind. Frankenstein’s Army is just a slice of that world.

Sara Michelle Fetters: Did you ever worry you were spending so much time on coming up with cool creature designs and concepts that you were letting the narrative and the script slide a bit?

Richard Raaphorst: Yes, I was very much aware of striking a balance, but I also know that a complex story could distract from the sensory experience. I wanted to make a movie that felt like going on a long journey; like traveling to a completely different world. To do that, I focused on the design. I used instrumental music as a tool. In my opinion the best music has no lyrics, because it allows you to fill in the story on your own. The listener creates the world. The viewer becomes the subject.

Sara Michelle Fetters: Was this always going to be a found footage piece? Was that always the original intention?

Richard Raaphorst: I used found footage so that the viewer felt like they were the ones being chased around by the zombots, I wanted to be IN the movie instead of watching it. Using found footage allowed me to make this like a fist person shooter video game, where the audience is fully immersed. Watching other people get chased by zombots from a wide angle isn’t the same as seeing it from the point of view of the characters in the film. Found footage also has a gritty, speckled appearance that I found appealing because the texture brings in richness. 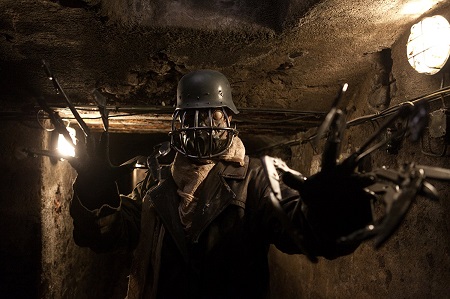 Richard Raaphorst: Well, I just tried to make a movie that I would want to see myself. By keeping that in mind, I didn’t need to worry about rehashing the same old thing. I knew it would be unique. I would have had to worry if I was trying to copy what was already out there. It’s in my nature to be different. For a long time it was in my disadvantage because people thought my ideas were too weird. Now, I hope I finally proved that there’s an audience for my ideas, even if they are weird.

Sara Michelle Fetters: What were the difficulties as far as shooting was concerned? Were there challenges you hadn’t anticipated?

Richard Raaphorst: Because I relied mostly on practical effects, not CGI, the takes took a long time to set up and run through. Keeping all of the filming equipment and crew members out of the shots was like a complicated dance. With physical effects, the actors have more to react to. The gore and explosions are not all added in post-production. Everything was timed carefully, like a military operation.

Sara Michelle Fetters: What inspires you as a filmmaker?

Richard Raaphorst: Music inspires me more than anything, specifically instrumental music. To me, lyrics make music less interesting and less engaging. Instead of inventing a story to go with the music, the lyrics tell you how you’re supposed to feel. But a song without lyrics creates a mood and then allows your mind to fill in the rest. I am inspired to create worlds that fit with the instrumental music.

Sara Michelle Fetters: Where you surprised at all by the reactions to the film? So many positive notices from the festivals circuit and from its limited theatrical release. That had to be feel pretty great, I’d imagine.

Richard Raaphorst: Yes, I was completely flabbergasted, and I still am. I remember my life from behind the drawing table for many years, and suddenly, I had this huge, enthusiastic audience. It’s a shocking difference, and I still need to get used to this idea. I consider myself as part of the audience more than the guy who made the film.

Sara Michelle Fetters: Is there any interest in continuing the story forward? Or is it time to journey towards new ideas? What’s next? 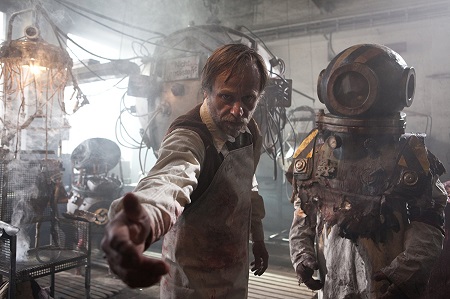 Richard Raaphorst: Even though I said I could make several more movies in the same world I created for Frankenstein’s Army, I am also very interested in creating new worlds to explore and fill with monsters or demons. I can’t help it but I’m very much attracted to the darkest stuff out there. I’m in the early phases of two projects right now, one involving a disease about antimatter and one based on a creepy Dutch fairytale.

Sara Michelle Fetters: With the film premiering on Blu-ray and DVD, how do you hope new audiences react? What do you hope they’re talking about as viewers are sitting in their living rooms after it has come to an end?

Richard Raaphorst: I hope they had a fun time and enjoyed the 90-minute show I put together. Furthermore, I hope it will inspire some minds to be creative and invent their own worlds. Finally, I really hope I surprised them. My philosophy is, better to be surprised than be satisfied. Better to be upset than bored to death.