No Ifs, Ands or Buts About It, Stay is Terrible

I was about two-thirds of the way through Gayle Forman’s best-selling novel If I Stay when I had the early opportunity to view director R.J. Cutler (The September Issue) and screenwriter Shauna Cross’ (Whip It) movie adaptation starring rising talent Chloë Grace Moretz. Once it was finished I knew I would never waste my time reading the final few chapters. Not because the book wasn’t any good, it’s actually quite well-written, but because the film version was a colossal waste of time and talent, so mind-numbingly awful that any affinity I might have been feeling for Forman’s source material was instantly erased as soon as the credits rolled.

Make no mistakes, If I Stay might be the worst film of 2014, and considering I’ve already endured such putrid disasters as Winter’s Tale, Ride Alongand The Legend of Hercules that’s not a statement I make lightly. Cutler’s film is a hackneyed, overly melodramatic mess that talks down to its audience and wallows in the basest forms of simple-minded sentimentality. On top of that, it does a grave disservice to its main character, leading to an answering of the titular query that’s as insulting as it is abhorrent.

The plot is vintage Hollywood hokum. Moretz is Mia Hall, a Portland, Oregon High School Senior and cello prodigy waiting on pins and needles to here from Julliard on whether or not she’s been admitted to attend. On the day her letter of acceptance (or denial) is scheduled to arrive, thanks to an impromptu snow day she and little brother Teddy (Jakob Davies), dad Denny (Joshua Leonard) and mom Kat (Mireille Enos) decide to take a late winter trip to see the grandparents. A patch of icy road later, Mia finds herself literally having an out of body experience, the entire Hall family suffering an unthinkable tragedy leaving the eldest child a spectral observer at the hospital forced to choose between life and death. 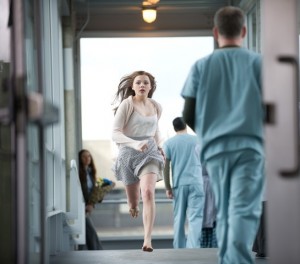 Like the novel, the movie begins with the auto accident, Mia becoming an ethereal witness to her family’s fates while also an almost helpless observer as hospital staff go out of their way to save her life. As she’s told repeatedly, it’s up to her whether or not she lives or dies, the young teen taking this challenge as an opportunity to revisit important moments in her life, most notably a wide-eyed romance with young rock and roller Adam (Jamie Blackley). She embraces memories both happy and sad involving her parents while also reveling in her love of classical music and the subsequent bonding with her cello. The youngster is, in her own way, weighing the pros and the cons of whether or not she actually wants to live through this ordeal, everything more often than not revolving back to her apparent oversize love for Adam.

While an admittedly silly and inherently melodramatic concept to be sure, at least as things pertain to Forman’s source material somehow the author manages to make this overly emotional obnoxiousness feel authentic and resonant no matter how syrupy things get. More, there is a weight to the central tragedy involving Mia’s family that hits home like a punch to the gut, making her ghostly journey all the more effective in the process.

But as far as the movie is concerned? Well, let’s just say there aren’t a lot of positives for me to sit here, recollect on and subsequently write about. The film is a disaster pretty much from the moment the Hall family’s car is run off the road culminating in one of the most absurd, close to insulting conclusions I’ve had the misfortune to sit through in some time. It wastes a fine, suitably complex performance from Moretz while also throwing both Enos and Leonard under the bus giving all of them little to work with and even less to do.

It does not help that Moretz and Blackley have no chemistry. Their all-powerful love is about as affecting as a swift kick to the head or curt slap to the face, the kid coming through as more of an egotistical toad than he does anything else. Blackley never attaches himself to the character, never finds a way to get him to feel multidimensional or real, and by the time all is done I was so put off by his whiny, self-centered antics I started to wish Adam had been in the car along with the rest of the Halls so I wouldn’t have had to put up with him.

Cutler and Cross never find a way to make the material anything less than insufferable, and even when they do get something right (there’s a beautiful scene between Moretz and Enos while washing dishes that’s as touching as it is subtle, while the Julliard audition sequence is suitably bravura) they immediately undercut these moments with flashes of rank, almost amateurish, blasts of inane sentimentality making them all for not. It all builds to final moments that are so poorly handled, so misdirected, so blatantly sensationalistic they’re laughable, thus making sitting through all 106 minutes of this fiasco a massive waste of time.

I can’t say whether or not I’d feel the same had I finished the novel. I can only imagine Forman’s prose follows the same pathways as this adaptation, but based on the first two-thirds of the book I’m going to guess she handles it all tons better than the filmmakers do here. Not that it matters, If I Stay is so bad, so unrelentingly terrible, I’m never going to read the last few pages, and the only time I’m even going to think about this story or these characters again is when I compile my ten worst films list of 2014.