I wasn’t the biggest fan of Iron Man. Sure I gave it three-stars and relatively positive review, but the little robot versus bigger robot finale still left a bad taste in my mouth that hasn’t vanished no matter how much the first two-thirds or so kept me happily entertained. As well cast as the film was and as much as I enjoyed the raucous set pieces I’ve never been able to get over the feeling I was overly kind to the Marvel superhero’s initial adventure, subsequent revisits the past couple of years not really changing anything as far as that is concerned. 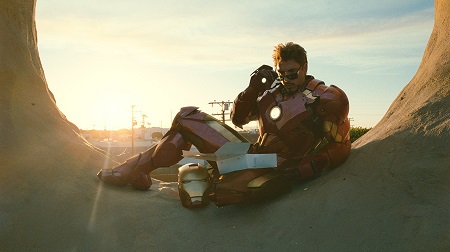 Thinking about Iron Man 2 I am struck with an almost identical response to the one I had for the superhero’s 2008 adventure. I still adore Robert Downey Jr. as Tony Stark and I absolutely revel in the chemistry he has with Gwyneth Paltrow playing his trusted secretary and potential love interest Pepper Potts. I love the way their dialogue crackles with playful electricity, the way returning director Jon Favreau and Tropic Thunder screenwriter Justin Theroux do their best to subvert genre conventions by adding some whip-smart satire to the normal onslaught of comic book tropes.

What I don’t like is how lumpy and nondescript the actual plot of the film is, or how it relies on pretty much the exact same climactic conventions of the first only this time adding a second hero to face off against a seemingly endless series of robotic Iron Man facsimiles. Like I said about the original, after a while the whole thing starts looking like a CGI version of the battle between ED 209 and Robocop, and no matter how good the effects are the emotional emptiness of what is transpiring makes these scenes more than a tiny bit tiresome.

I will admit this sequel is far better paced than its predecessor was, and even when the script starts getting clunky with narrative contrivances (a huge subplot involving Stark’s health isn’t interesting; its resolution even less so), Favreau somehow still manages to do a nice job keeping things moving. It helps considerably that Downey Jr. can do just about no wrong as Stark, and even if he’s just going through the paces and picking up a paycheck he’s still such a joy to watch the actor almost all alone makes a lot of the film’s problems feel close to nonexistent.

As for that aforementioned plot? It mostly revolves around Tony’s attempts to keep the Iron Man technology privatized and out of the hands of the United States military even though a pernicious Senator (Gary Shandling) and duplicitous fellow arms merchant Justin Hammer (Sam Rockwell) are dying to get it. Additionally, the narcissistic superhero also must face off against Russian Ivan Vanko (Mickey Rourke), a fellow scientific whiz who wants to see him pay for what he sees as crimes against his father by the Stark Corporation.

There’s more, not the least of which is Lt. Col. James Rhodes’ (Don Cheadle, taking over for Terrence Howard) increasing distrust of his friend Tony due to his apparently frazzled emotional state and the introduction of a new secretary (Scarlett Johansson) for the superhero industrialist after he promotes Pepper to be his company’s CEO. It’s mostly all filler, however, and a lot of it doesn’t actually make much sense (especially Rhodes’ immediate ability to pilot one of the suits even though he’s never had any training or practice inside of it), and to say I cared about almost any of it would be an outright lie.

If it sounds like I’m being harsh I’m not trying to be. For a film just over two hours in length I was never bored and very little annoyed me, some crappy overhead CGI effects accompanying a race in Monaco the only thing that came close to doing so. The cast is exemplary, the quips are funny and most of the action scenes are genuinely exciting. Favreau keeps improving behind the camera, and while I’d never put him in the same league as a Christopher Nolan or a Bryan Singer, he’s still good enough I’d be happy to watch almost anything he chooses to direct next.

I just wish I felt better about Iron Man 2 as a whole, especially the derivative and not all that interesting finale. As superhero adventures go this one is sadly more Spider-Man 3 than it is Superman II, and while it doesn’t fall to the disappointing depths of the former it doesn’t even come close to obtaining the superlative heights of the latter. Like the original this is a movie I don’t particularly mind but don’t exactly love, either, and if I didn’t say that in so many words in regards to the first film not doing so as far as this sequel goes isn’t a mistake I plan on making twice.