Aboard the International Space Station, a team of scientists and astronauts is eager to get their hands on the first probe returning from Mars. It’s holding precious soil samples in its belly, the possibility for discovery it promises beyond belief. Dr. Miranda North (Rebecca Ferguson) is way more leery than the majority of her shipmates, and as a representative from the Center for Disease Control (CDC) it’s up to her to make sure nothing hazardous could make its way back to Earth.

She has reason to be worried. Turns out, the soil samples contain a dormant life form, one the no bigger than a microbe. But after lead scientist Dr. Hugh Derry (Ariyon Bakare) manages to breathe new life into this creature, it begins growing at an exponential rate beyond imagining. Friendly at first, this alien life form doesn’t stay that way, things quickly escalating to the point the entire crew, which also includes station Captain Ekaterina Golovkina (Olga Dihovichnaya), pilot Sho Murakami (Hiroyuki Sanada), medical officer David Jordan (Jake Gyllenhaal) and engineer Rory Adams (Ryan Reynolds), discovers their lives are in mutual jeopardy. Worse, they have to be okay with that, because if this life form was ever to reach the surface, nothing would survive, only a second Mars revolving around the Sun where the Earth once orbited.

From a purely technical standpoint, Life is a marvel. Veteran Seamus McGarvey’s (Atonement, Godzilla) camerawork dazzles, an opening sequence spotlighting the successful capture of the Mars probe truly extraordinary. As pre-credit opening title sequences go, this one is a corker, directed to perfection by Daniel Espinosa (Safe House), special effects, editing and performance all working in magnificent symmetry. It’s a glorious beginning, setting the anticipating level high for the remainder of the picture, making me understandably curious where things were going to go next.

Not that this is a feeling that lasted especially long. Rhett Reese and Paul Wernick, two of the minds behind both Deadpool and Zombieland, have delivered a script that’s short on new ideas and is lazily content to play within the jungle gyms of films like The Quatermass Xperiment, Lifeforce, The Thing and, most unsurprisingly, Alien. It pulls from literary sources ranging from the works of Isaac Asimov, to Stephen King, to H.P. Lovecraft, doing nothing novel with any of the insights it has gleaned from them as it energetically moves its way forward to its forgone conclusion. In short, this screenplay is shockingly dumb, there’s just no other way to put it, the final film more akin to a low budget ‘80s Roger Corman schlock sci-fi knockoff than it comes close to resembling a Ridley Scott or John Carpenter genre classic.

Yet Espinosa’s movie is never boring. The director manages to keep the tension level high even if surprises are few and even further between. There’s little that happened that I wasn’t ready for. Same time, there are a handful of decent shocks, not the least of which is the carnage and bloodshed that ends up taking place during the alien creature’s first attack. More, there are some astonishing images here, Espinosa utilizing the zero gravity locale rather splendidly, droplets of blood floating in midair like malleable harbingers of doom signifying death is now slithering its way through the space station’s corridors.

The creature design, one part Lovecraft, another part a certain Marvel Symbiote (of which the studio insists this story has no relation to whatsoever, so keep that in mind), one part slither, serpentine nightmare, is admittedly impressive. Even more astonishing is the way it deals with its victims, taking them apart in ways that defy belief and twist the stomach into uncomforting knots. Best of all, Espinosa doesn’t waste a lot of time drawing things out, and once the carnage starts, it just keeps going and going and going until there’s no place further for all this madness to go to. 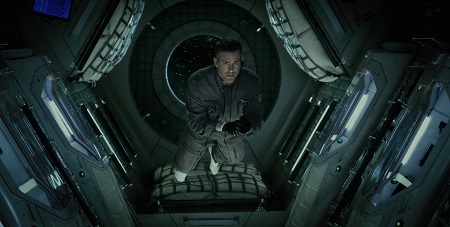 That’s not entirely true. There’s one place the director fails to keep his foot on the peddle and it happens at the absolute worst possible time. The ending of this film is drawn out to an unimaginable degree. Worse than that, the actual resolution isn’t slightly satisfying, the whole thing a rather lame bit of misdirection and subterfuge even M. Night Shyamalan at his worst would find laughable. It’s a poor way to send people out the door, and if things had been handled with the same ferocity and speed as the remainder of the feature it’s doubtful it would matter just how idiotic those last moments end up proving to be.

I can’t hate Life. While no one in the impressive cast does their best work, all of them are still more than up to the challenge and selling even the most ludicrous scene imaginable, making maudlin bits of melodrama feel far more authentic and genuine than they have any right to be. The movie is also lethally cutthroat in how it treats its characters, and for many horror fanatics this has to be something of a moderate surprise as major Hollywood thrillers don’t typically do such things with A-list talent. But that still doesn’t mean this science fiction creature feature couldn’t have been better, and had the filmmakers spent as much attention and time on the screenplay as they did the technical aspects maybe there’d be something here to get excited about.