Thomas (Dylan O’Brien) doesn’t know what’s going on. He awoke on an elevator in the middle of a place known only as The Glade, not knowing anything other than his name. No past. No history. No knowledge of world events. No recollection as to who put him here and why. He’s a blank slate, but that doesn’t mean he doesn’t know wrong when he sees and feels it, and being here in The Glade that is multiplied by infinity.

He’s not alone. A group of fellow male youths has been residing in The Glade for some time now. Led by Alby (Aml Ameen), the ragtag collection of teens and young adults has done a grand job of setting up a rough facsimile of civilization. But all of them know there is more to be done. More, if they’re going to survive, then they’re going to have to figure out the only true obstacle handicapping all chances at freedom: The Maze. 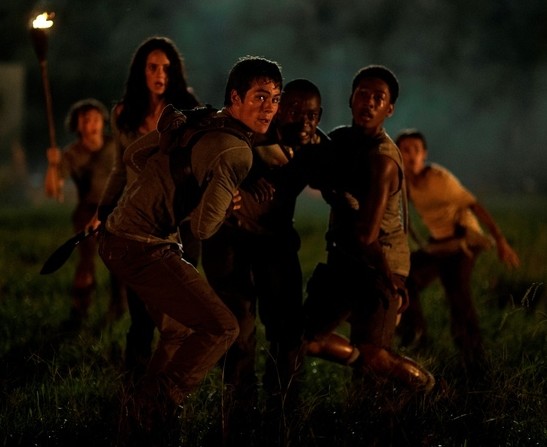 Like seemingly everything fifth or sixth movie to come down the pike these days, the new fantasy-adventure The Maze Runner is based on a piece of popular Young Adult fiction, this one by best-selling author James Dashner and, naturally, the first part of a potential trilogy. It goes without saying that Thomas, along with The Glade’s first and only female arrival, Teresa (Kaya Scodelario), are the key to solving The Maze and making sure Alby and the rest of the so-called Gladers survive. It also proves unsurprising that there is a massive conspiracy behind their imprisonment, a nefarious group of faceless and nameless watchers testing them to see how they respond when push comes to shove and their respective lives are on the line.

Unlike similar teen-friendly dystopian adventures like Divergent, however, there is a wonderful complexity to this “Lost” meets Lord of the Flies meets The Hunger Games meets any number of end-of-the-world apocalyptic excursions, Dashner’s source material supplying intriguing characters and thought-provoking situations throughout. There is a palpable sense of doom and dread, a weight many stories of a similar ilk made in the wake of the Harry Potter fantasies, Twilight and The Hunger Games have lacked. Life and death both have real meaning, and when a Glader meets their doom it isn’t pretty, it isn’t light and it certainly isn’t taken for granted.

Visual effects wunderkind Wes Ball makes his narrative feature directorial debut, and for once the hype hasn’t been wrong. Ball has an astonishing visual sensibility, yet at the same time never loses focus of character and of story, keeping both front and center. He keeps things almost entirely focused upon Thomas and his view of events, allowing the personal dynamics and interactions of the Gladers to drive the action forward and not vice-versa.

That does not mean he skimps on the fancy stuff. The design of The Glade itself, the ominous high walls of The Maze surrounding it, all are impressive, while Thomas and his fellow Gladers’ forays into the labyrinth itself is something to see. His first nighttime incursion inside to save Alby from certain death, working alongside primary ‘Runner’ Minho (Ki Hong Lee), is stupendous, filled with uncertainty and danger, everything building to a white-knuckle face-off with a mysterious creature none who have ever laid eyes on have lived to talk about it. 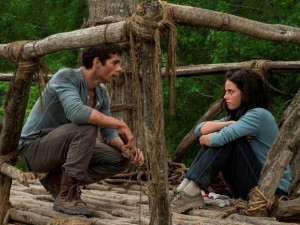 The issue, sadly, is the same one that handicaps so many of these attempts at bringing similar pieces of Young Adult fiction to the screen. The screenwriters and studio are so intent on franchise building, so hoping to craft a series of motion pictures that will make them box office dollars hand over fist, they forget to tell a satisfactory standalone tale. There is an annoying unfinished quality about this film that’s more frustrating and annoying than it is anything else, the last 20 minutes a boondoggle of unfinished ideas and themes building to a horribly muddled cliffhanger where nothing is resolved and little is explained.

You can get away with leaving things in an unfinished state. The Hunger Games: Catching Fire did this beautifully, as did both of the initial chapters of Peter Jackson’s The Lord of the Rings trilogy The Fellowship of the Ring and The Two Towers. The Empire Strikes back set the bar for this sort of thing 34 long years ago, revealing a devastating truth about one hero’s father while another was stuck in a state of frozen, death-like hibernation.

Yet all of those films feel complete in and of themselves, and while a larger story certainly still exists, the one going on inside their respective running times is satisfactorily self-contained. Characters see their story arcs evolve, while the central dynamics of the primary narratives don’t leave important facets dangling in the air for no particular reason other than they can. These movies work, all easy to return to and enjoy, making them happily re-watchable outside of the other chapter’s in their respective cinematic sagas.

This is not the case here. As good as many of the individual pieces might be, as handsome a production as it is, as an individual enterprise, The Maze Runner as a finished film is a frustrating affair. There is little resolved and even less that is acceptably explained, making individual characters’ heroics and/or sacrifices have little meaning or weight in the process. 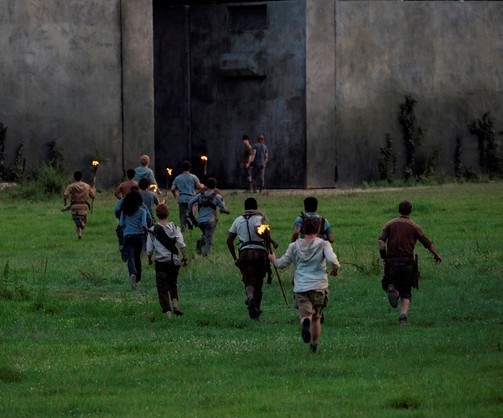 While the ethnically diverse ensemble of young actors is a good one (recognizable faces like Will Poulter, Blake Cooper and Thomas Brodie-Sangster make indelible imprints alongside O’Brien, Scodelario, Lee and Ameen), while Ball makes an impressive debut orchestrating things behind the camera, that doesn’t lessen the frustration I felt by the time the end credits began their scrawl. The Maze Runner is well made, and I certainly found myself intrigued and fascinated by much of what it had to offer; the fact it ended up being nothing more than a prequel to a sequel is a dumbfounding disappointment.