Adam (Tom Hiddleston) is an underground rock musician attempting to live in a total anonymity in the deserted rundown wilds of Detroit. His only contact with the outside world is Ian (Anton Yelchin), a young man with an uncanny ability to procure the most unusual and eclectic of objects – musical or otherwise – and an even better attribute in that he asks few questions and expects zero answers.

Eve (Tilda Swinton) is living in Tangier. She adores books, the written word exciting her to no end, the world-wise woman collecting vintage first editions of all classifications all in a lustful, almost carnal desire to voraciously consume each syllable hidden in plain sight on every page. Her best friend is Marlowe (John Hurt), his body aged and breaking down but his mind as sharp as ever, the stories he has cannily hidden behind his eyes ones that would blow historians’ minds around the world if they ever happened to come into the light.

These two will find a way to unite under the same moon, and there’s a reason he’s called ‘Adam’ and she’s called ‘Eve,’ the answers to numerous questions readily apparent to every Bram Stoker, Anne Rice, Joss Whedon or, sad to say, Stephenie Meyer fan worth their collective salt. Safe to say, his suicidal brooding about the world’s collective ills and her cooing caresses uttered under an icily cold moonlit sky hint at something larger, a little undead and brazenly supernatural, their love story a centuries-long affair showing no signs of coming to an end.

In many ways Only Lovers Left Alive is the most unlikely film to ever have been crafted by cult impresario Jim Jarmusch. At the same time, the interior elements aren’t as far removed from independent classics like Down By Law, Broken Flowers, Ghost Dog: The Way of the Samurai, Night on Earth and Dead Man as one might initially assume. The writer/director is still focused on how the human heart beats in direct synchronicity with the larger world around it, his commentary on the ills assaulting peoples of all shapes, sizes, creeds and backgrounds as razor-sharp and as eviscerating as ever. 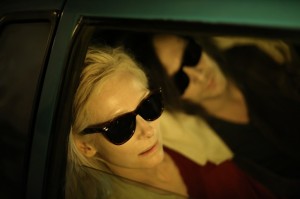 What’s interesting is just how easygoing and nonchalant much of this is while at the same time it so effortlessly speaks to larger universal truths at the exact same time. Adam frets and whines about the state of the world while Eve calmly and confidently tells him they’ve seen it all before and that nothing happening is any more traumatic or catastrophic than anything else they’ve experienced. The say little but seem to take in and understand everything, ever-observing and always experiencing while revealing little of the ferocious, carnivorous desire lurking within.

Tranquility is shattered with the arrival of Eve’s sister Ava (Mia Wasikowska), a chaotic whirlwind who bites first barely pausing to question her actions afterwards. She is, in many ways, representative of the world’s whims, her fast-paced lifestyle and unthinking shenanigans holding a mirror up to current me-first stereotypes which place fame, prestige and narcissism at a premium  and selflessness and restraint as traits to be scoffed at and ridiculed. 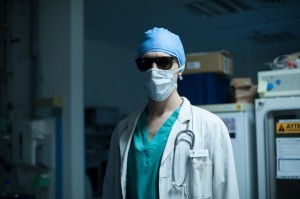 Initially it appears as if Jarmusch is spinning in circles, presenting disconnected ideas and concepts as if in an odd, almost disaffected attempt to see which ones will stick and which he should discard and no longer care about. But it’s all an intricately composed trick, an interlocking puzzle of human emotion and lofty ideals beholden to darker, more animalistic desires that sometimes consume and devour the very hand yearning to caress them. He tricks the viewer into lowering their defenses bit by bit, the overarching themes coming more into tune at the same time the musical discord intricately composes itself into a hypnotic cadence impossible to stop humming.

Hiddleston and Swinton make a magnificent pair, the two veteran character actors slinking and slithering their way through the bohemian undead lovers with seductively lascivious ease. They have undeniable chemistry the moment they begin communicating, easily hinting at an all-encompassing, sometimes damaging, most often emboldening love that breaks barriers and defies convention. The two smolder and saunter their way through the proceedings with exhilarating grace, everything building to conclusions that are as obvious as they are startling, each of them opening themselves up in ways that feel raw, authentic and achingly pure.

Jarmusch is a great filmmaker, his one-of-a-kind filmography speaking for itself. With Only Lovers Left Alive he adds another borderline masterwork to the list, changing gears once again to deliver a supernatural love story hiding a deftly insightful social commentary within its intelligently labyrinthine layers. As odd as it is familiar, as evanescent as it is particular, the film is a timeless parable of heartbreak, longing, togetherness and romance speaking to greater truths just as it dives into the most intimate of interior corners. Most of all it is an innately personal experience harkening to the best we could ever hope to be while hauntingly reminding that the worst elements of the human condition callously hide within the center of our very own souls.