Michael (Ewan McGregor) is a renowned chef with commitment issues, throwing his latest conquest out of his bed because he can’t sleep with someone lying next to him. Susan (Eve Green) is an epidemiologist who feels like she’ll never know romance again, unable to trust the men who are attracted to her because of a prior relationship that went horrendously awry. It only took the end of the world for these two fractured souls to find one another, and with each of their senses slowly deserting them the one thing the know for certain is that as doom shrouds the entire planet in terrifying darkness neither of them is interested in persevering without the other by their side.

I’m not entirely sure what to make of David Mackenzie’s (Young Adam, Spread) odd, weirdly antiseptic romantic doomsday epic Perfect Sense. Kim Fupz Aakeson’s (A Somewhat Gentle Man) script is a strange animal, its weirdly anachronistic scenario of two broken souls finding clarity in one another’s arms as the world shatters around them both touching and dissociating at the same time. It’s hard to grab hold of anything here, difficult to grasp what it is exactly the director and the writer are trying to say, and while plenty of individual moments are sensational on the whole this one left me scratching my head wondering what the heck it was I’d just watched.

The idea is certainly intriguing. A plague spreads around the globe, people struck with an intense, almost unfathomable sadness that ends up robbing them of their sense of smell. Scientists try to grapple with what has happened, looking for some sort of clue as to the cause for this epidemic. But even as they do people find a way to endure, going on with their day-to-day lives as best they can.

It is with this as the backdrop that Michael and Susan connect, he a chef specializing in aromatic delights while she’s a scientist in charge of trying to find a solution to this sensory conundrum. Together they discover a form of emotional honesty they’ve never known or attempted before, the intimacy they achieve belying the potential horrors of the budding catastrophe that threatens to tear them, as well as the entire planet, apart.

But for all the movie’s strengths it’s so ephemeral in tone and in execution I never got a handle on what it was Mackenzie or Aakeson were trying to do. As a metaphorical look at the nature of human connection its themes never click together as one, and while I was often struck by the agonizing visual poetry of certain segments emotionally I was frequently left shockingly cold. 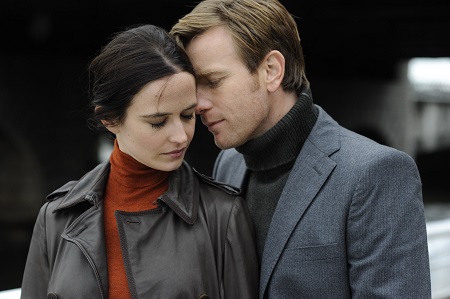 I do wish I liked the film more. McGregor and Green make a divine romantic pairing, and watching them navigate this sensory deprivation minefield is oftentimes stunning. Max Richter’s (Sarah’s Key) elegiac score is magnificent, while the images cinematographer Giles Nuttgens (Saint John of Las Vegas) strings together with poetical virtuosity border on Terrence Malick-level intensity. There is a hypnotic quality to the narrative I found impossible to dismiss, and for a motion picture that never finds its footing I just as clearly cannot say I ever wanted to look away from the screen and move on to watching something else.

Maybe this is enough. Maybe Mackenzie’s latest minimalist high-concept opus will grow on me over time, will keep pounding against my psyche so it forces me to watch it again and reassess at a later date. Maybe a lot of things, but for right now I find Perfect Sense to be too ambiguous for its own good, and as doomsday scenarios go I’m not sure this is one I’ll ever be in the mood to contemplate again.