An angry teenager still trying to come to grips with the tragic death of her father strikes back at her mother for forcing her to move to a secluded house in the woods away from her friends by summoning the malevolent demon Pyewacket, the consequences of her doing so more unfathomably horrifying than anything she ever could have anticipated. 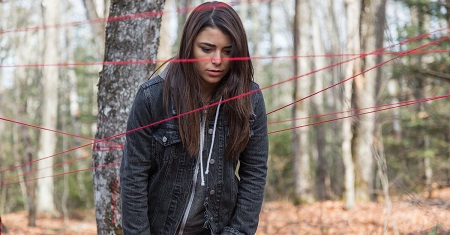 “Teenager Leah Reyes (Nicole Muñoz) is obsessed with the occult. With the recent death of her father, she’s been playing around with Black Magic alongside her best friends Janice (Chloe Rose), Aaron (Eric Osborne) and Rob (Romeo Carere). Nothing major, mind you, but just enough that when she speaks with occult author Rowan Dove (James McGowan) at a local book signing it almost sounds like she knows what she’s talking about.

But when her still-grieving mother (Laurie Holden) gets a new job out of town and forces them to take up residence in a secluded house out in the middle of the woods, Leah finds herself angry in ways she never thought possible. After an argument takes that vitriol to another level, the teenager does the unthinkable. Going into the depths of the forest, she performs an act to summon the malicious spirit Pyewacket, making a wish for vengeance that she doesn’t really want or think she’s even going to get. After all, demons, magic, the Dark Arts, none of that actually exists, and whatever it is that Leah has asked for, even at the cost of her immortal soul, it isn’t going to come to pass, so it’s not like she has anything to worry about.

Based on the outdoor survivalist camping thriller Backcountry and now his supernatural horror yarn Pyewacket, I’m not at all sure I’d ever want to journey into the woods with talented writer/director’s Adam MacDonald. Seclusion. Fallen leaves. The sound of an eerie wind whipping through the trees. Moonlight playing tricks on the eyes. MacDonald knows what he’s doing, and with cinematographer Christian Bielz once again magnetically assisting him, composing uncompromisingly unhinged visuals guaranteed to keep the viewer discombobulated, and featuring crackling sound design that sends minions of shivers dancing malevolently up the spine, it’s safe to say his handling of things inside this supernatural demonic shocker is every bit as strong as it was with his much more grounded, bearishly grizzly 2014 debut.

Not that Pyewacket is as consistently successful as the director’s previous effort was. There’s not a lot of suspense as to where all of this is heading, Leah making an almost unconscionably bad teenage decision that doesn’t exactly lend itself to a wide variety of outcomes. Figuring out how things are going to twist and turn isn’t difficult, and as such suspense during the critical final act is substantially lessened because of this. I just wasn’t surprised by anything that happened during the last 10 to 15 minutes, and considering where things end up the fact this isn’t more of a problem is honestly rather astonishing.

Or maybe not. MacDonald is an ace at setting a mood. Better, he knows that he has to put his characters first, make them intriguingly multidimensional, otherwise none of the coming nastiness that’s intent on doing them harm won’t matter in any memorable way. Here, we don’t need to have the particulars spelled out for us in regards to what exactly happened to Leah’s father. No, what we need to see is how this loss is affecting his widowed wife and emotionally flailing daughter. It’s their relationship that is key; the pain they collectively feel, their inability to express this overarching ache to one another in ways that might possibly be cathartic or comforting, that is the fuel that will light the candle of the coming demonic doom Leah inadvertently ignites.

As for that said mood, dang does MacDonald do a bang-up job there. As already mentioned, this film’s sound design had me twisting and turning in my seat as if my chair were covered in recently sharpened razor blades. The director is out for blood, and while this thriller is a slow-burn affair that craftily bides its time until just the proper moment to unleash a flurry of dexterously ominous thrills, the craven wickedness of it all is portentously intoxicating to say the least. There’s a sensational sequence where Leah is certain something terrible is going on and Janice spends the night at her best friend’s new house to prove her wrong. The scene MacDonald stages between the two actresses the next morning is bone-chilling in its minimalist dread, the brief bit of unspoken terror passing from one girl to the other setting the stage for the events of the climactic act.

It should also be said that the filmmaker, much like he did with Missy Peregrym in Backcountry (whose voice also makes an appearance here), gets a spectacular performance out of his lead, former child star turned rising adult talent Muñoz. The young actress is fantastic, taking a rather stock character in Leah and finding increasingly intriguing ways to make her feel fresh and original. I loved the way she transitions through various emotional states of being as quickly and as precisely as any excitedly passionate teenager would, the misbegotten, misdirected anger the youngster is venting towards her equally emotionally wounded mother instantly credible.

Muñoz doesn’t attempt to dull her character’s blunt demeanor or hardened edges instead understanding that Leah’s flaws are just as vital to understanding who she is as her more compassionate virtues are. In the process, this makes her flippantly angry decision to unleash Hell on Earth all the more devastating, and even though she doesn’t believe her spell will actually work, the fact she even goes through the motions of casting it still remains tearfully heartbreaking due to just how completely the actress gives herself over to her character’s anguished state of being.

If only the conclusion weren’t so forgone, it’s entirely possible MacDonald might have crafted a paranormal stunner the likes of which I’d be extolling the virtues of for the rest of 2018. Even so, I still think Pyewacket is worthy of a look. Not only does Muñoz give a marvelous performance, the director continues to show an uncanny ability to to frighten in ways that are intimately sinister and, more importantly, unbearably human. He continues to put his characters first, making them live and breathe in ways that are innately relatable. All of which makes this thriller a rewarding genre rollercoaster flaws and all, and if one is going to venture alone into the woods looking for a good scare MacDonald’s latest hike into the unknown is an awfully good place to start.”

While not quite as terrifyingly successful as 2014’s Backcountry, writer/director Adam MacDonald’s supernatural coming of age shocker Pyewacket is still an uncomforting psychological thriller that features a sensational climax and a strong performance from rising star Nicole Muñoz. Shout! Factory’s Blu-ray presentation is marvelous from a technical perspective even if it lacks any memorable special features. Worthy of a look.