I knew nothing of the rivalry between 1970s Formula 1 racing icons between James Hunt (Chris Hemsworth) and Niki Lauda (Daniel Brühl) before watching director Ron Howard and writer Peter Morgan’s Rush. My sporting knowledge is pretty broad, but where it comes to auto racing I’m more or less clueless. It’s just not an athletic activity I find interesting, and while I find films like Gran Prix, Le Mans and Days of Thunder entertaining people getting behind the wheel and driving around in circles in real life just doesn’t do a lot for me. 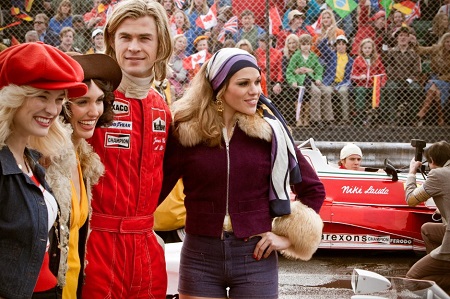 With that in mind, I’m not sure I could have enjoyed Rush any more had I wanted to. The pair’s follow up to the Academy Award-nominated Frost/Nixon, Howard and Morgan have reunited to construct an energizing, adrenaline-filled melodrama of competition, obsession and rivalry that transcends the inherent clichés of the genre with ease. It features a spellbinding human story, the artful majesty of so much taking place beyond compare.

The film covers more than a few years, but its main focus is on the 1976 competition between the two as both drivers vied to be the world’s best. They would ferociously compete, one against the other, each looking for any advantage they could get, much to the detriment of their personal lives leading to untold stresses thrown upon themselves as well as their significant others, wives Suzie Miller (Olivia Wilde) and Marlene Lauda (Alexandra Maria Lara). Things culminate in one of the most horrific crashes in Formula 1 history leading to an even more spectacular resurrection, each man finding strength in the other’s triumphs allowing them to overcome odds neither ever could have predicted let alone anticipated.

Morgan’s script is as focused as the two men it chronicles. It doesn’t waver as it peers at both Hunt and Lauda, dissecting them with razor sharp precision never overlooking their flaws and not about to transform them into something they aren’t. The two racers are not the most likeable of me, both of them egotistical narcissists in their own unique way. Yet Morgan allows them to be men, to be complex individuals whose flaws are just as integral to their overall makeup as their positive attributes.

None of which would matter in the slightest if the actors portraying them were not up to the challenge. Both Hemsworth and Brühl attack their characters with gusto, showing them for whom they are and the fantasies a lesser film would attempt to make them out as. They are, in most ways, distinctly unlikeable young men, each full of so much vim, vinegar and vitriol the fact they drive as well as they do isn’t a surprise even if the fact they can actually live their lives without shame in many ways kind of is.

Hemsworth has never been better, and while Hunt isn’t all that far removed from Thor that doesn’t make his performance any less marvelous. He plays the man to the hilt, his raging egotism pouring from every fiber of his being. Yet the tendencies propelling him onwards, the sheer force of will required to drive in the most egregious of conditions, all of that is written all over his face. Better than that, so is the hidden humanity, an important moment with his model wife Suzie breaking my heart even as Hunt masks the pain by hiding behind his masochistic façade.

But the real story here is Brühl. The Inglourious Basterds actor is on fire, moving mountains with the raise of an eyebrow or the egotistic twist of a syllable. In lesser hands this man would be entirely unredeemable, a person to be despised and hated. Thing is, that doesn’t happen, not ever, not for a second, and the reasons for that are almost entirely due to Brühl’s magnetic brilliance. He runs the full gamut of the human experience, doing things and taking actions close to inconceivable, everything building to a glorious moment of clarity speaking both to Lauda’s competitive desires as well as his blossoming humanity.

In theory Howard seems all wrong as the director who would want to take on something like this. He’s won some Oscars, yes, but the old school safeness of Apollo 13, A Beautiful Mind and others speaks for itself. Don’t get me wrong, he’s a pretty great filmmaker, treats his actors with respect allowing them to dig in and blossom in ways sometimes I think they don’t even know they’re capable of. But a story like this, the raw intensity required to pull it off, I just didn’t think he had in him, the levels of dark obsession at play so heightened and all-encompassing they’re not exactly elements he’s ever showcased in great detail in any of his previous projects.

Save one. The Missing held those traits, showed that Howard was willing and able to dive headlong into the abyss and not flinch. More than that, and this is not a surprise for anyone that recalls Grand Theft Auto, he has innate ability to put the viewer inside those Formula 1 cars, the exhilaration of each race pulsing through the fiber of every frame of the motion picture itself. There is a Frankenheimer-like intensity (think Grand Prix, naturally) that is undeniable, that coupled with the complex characterization creating an entire motion picture that’s as physically invigorating as it is intellectually nuanced. 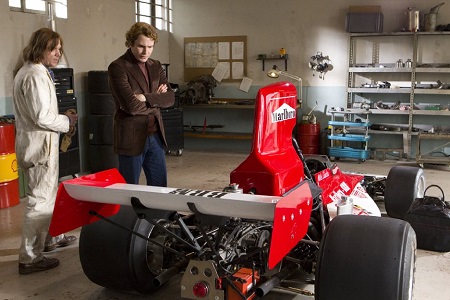 I don’t think the women are treated particularly well, and as good as both Wilde and Lara are their respective characters remain frustratingly one-dimensional, the film not wanting to spend the time or the energy to make them more than nondescript, if still intriguing, shells. For that matter, none of the actual secondary characters, not a one of them, anywhere, at any point, are given much to do, and while certain actors do standout for a moment or two they don’t do so in ways that are what I’d call memorable.

No matter. The movie is about Hunt and Lauda, everything else barely secondary. Their relationship is what powers this engine, and as great as the sound design, cinematography and editing might be – all of which are Oscar-worthy – none of that would matter if this central component wasn’t beyond par. Howard and Morgan have made a movie whose engine roars to life with astonishing ferocity, Rush a full-bore entertainment of living life on the edge and the adrenaline high that comes from doing it that deserves to be one of 2013’s biggest hits.