“My name is Christina Ruth Cromwell. I’m 17, and I live in New Rochelle. I think my stepfather is trying to murder my mother!” 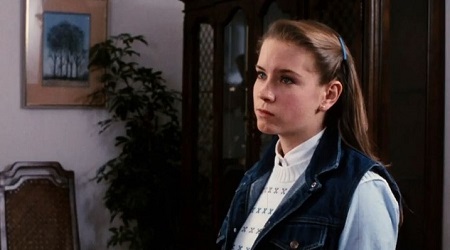 The late Michael Winner’s 1984 cult curiosity Scream for Help is positively nuts. Writer Tom Holland’s script feels something like a dry run for his classic 1985 favorite Fright Night only instead of a teenager dealing with a vampire living next door to him this one has a homegrown slasher bent to it involving a 17-year-old girl certain her creepily charming stepfather is secretly plotting to kill her mom. But the way Winner stages things? How he navigates through the story? It’s just nuts. The whole thing feels like it’s some sleazy melding of a Nancy Drew mystery, Peyton Place, Shadow of a Doubt and television soap opera at its most incredulously melodramatic. The movie is a giant catastrophic mess that just so happens to be monstrously entertaining at the exact same time. As to whether its glorious collection of thrills, chills, shocks, laughs and other vary surprises were all intentional? That’s unfortunately a question I simply cannot answer.

The basic plot revolves around New Rochelle teenager Christina Cromwell (Rachael Kelly). She’s positive her stepfather Paul Fox (David Brooks) is secretly attempting to murder her wealthy mother Karen (Marie Masters). Problem is, no one believes her, including her mom. But not one to take rejection sitting down, Christina takes it upon herself to investigate and follow her stepfather, never guessing she’d uncover an even bigger conspiracy that’s far more outlandish and vile than anything her imaginative mind ever could have come up with on its own. In the end it will be up to help her mother avoid almost certain death, and if she has to get a little murderous herself to save the day then that’s just how it’s got to be.

It’s hard to know where to begin. Featuring a jaunty, score composed by John Paul Jones of all people, shot with a colorful opulence courtesy of esteemed cinematographer Robert Paynter (An American Werewolf in London, Superman II) that would feel more apropos for a Douglas Sirk period melodrama than it does a down and dirty horror-thriller, right from the start something just feels off about Winner’s motion picture. It’s like he just didn’t know what to do with the material, and considering he directed a handful of genre exploitation efforts like Death Wish and The Sentinel this is admittedly a little surprising. Instead, he’s perfectly happy revealing every secret, every twist and every turn without any hesitation whatsoever, almost as if he wants the audience in on what’s happening for reasons only he appears to understand.

Is it supposed to be so funny? Did he look at Holland’s script as something of a genre riff or parody? Or did he actually believe what he was putting up on the screen was suspenseful? That by playing up the melodrama and having his cast play things with such broad, almost cartoonish exuberance would amplify the terrifying emotional components lurking right at the heart his film’s story? As we’ll never know the answer to those and a myriad of other questions, the best I can do is just sit back and accept this gruesome foray into camp horror for what it is and not dwell on all its indecipherable ambiguities. The whole thing just doesn’t make a lick of sense or feel like it belongs in anything resembling the real world, all of which strangely makes the darn thing more entertaining to watch, not less. 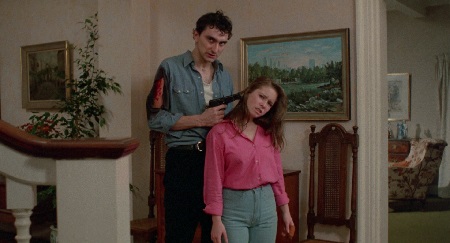 Does that mean I can recommend Scream for Help? I have no idea. It does mean I hope interested parties give it a look, and that genre fanatics worth their salt dig it out of the back corner of the horror vault and introduce it to their friends and family with all the pomp, circumstance and fanfare the film deserves. This is one psychotic time capsule of 1980s insanity that for all its numerous faults is still incredibly easy to watch and remarkably difficult to not enjoy. In other words, go out on a limb and give this underground gem of overwrought mayhem, stilted comedy and gorgeously bloody sleaze a chance, the entertainment value to be found in all its bewildering excess impossible quantify.

The highlight is the freewheeling interview with Holland, the Child’s Play and Fright Night filmmaker not holding anything back as he talks about his feelings towards to the film and what he feels director Michael Winner did to his script. Definitely a must-watch featurette.

The insanity of Scream for Help cannot be undersold. Michael Winner’s head-scratching teenage coming-of-age slasher film is a skuzzy Nancy Drew mystery overflowing in easygoing sleaze. It’s freakishly entertaining, likely for all of the wrong reasons, and I’m sort of flabbergasted I’ve never watched this wonderfully schlocky misfire until now. Scream! Factory’s new Blu-ray features a dazzling 2K scan of the film and some solid special features, making it an absolute must for fans to add to their personal collections.