In ‘Just Another Saturday Night,’ veteran enforcer Marv (Mickey Rourke) attempts to put the dots back together when he finds himself on a plateau overlooking Sin City, a pair of wrecked automobiles by the side of the road and a handful of bloody college punks laying at his feet. In ‘The Long, Bad Night’ self-confident professional gambler Johnny (Joseph Gordon-Levitt) returns to his hometown to make the ruthless Senator Roark (Powers Boothe) look like the chump he is.

In ‘A Dame to Kill For,’ reformed bad boy Dwight (Josh Brolin) finds himself under the thumb of his duplicitous former lady love, the intoxicating temptress Ava Lord (Eva Green). And, finally, in ‘Nancy’s Last Dance,’ still pining over the selfless death of her beloved protector Detective Hartigan (Bruce Willis), kind-hearted stripper Nancy (Jessica Alba) enlists Marv’s help in making sure the man who did him in finally pays for his crimes.

Welcome to Sin City: A Dame to Kill For, Robert Rodriguez and Frank Miller’s long-awaited follow-up to their somewhat surprising 2005 success Sin City. Utilizing the same CG-generated visual esthetics of the first film, framing everything in icy cold black and whites with splashes of neon tinted color, the sequel is every bit as eye-popping as its predecessor was, giving things a look and a feel that’s uniquely, and intriguingly, distinctive. 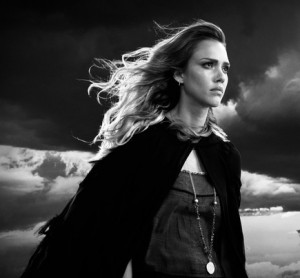 Unsurprisingly, also much like the previous pulp effort, Sin City: A Dame to Kill For is a case study in style over substance, Rodriguez and Miller trading in hard-boiled noir tropes not doing a single thing one would ever consider character-driven, complex or subtle. That said, unlike the original this one isn’t anywhere near as much fun, and while moments of pleasure can be found they’re so few and far between getting to them isn’t worthy of the effort. This is a case where more isn’t more, the filmmakers just engaging in shameless self-aggrandizing exploitation simply because they can and not because either the movie or the stories being told are benefiting from their efforts.

It’s not a total loss. Marv was a fan favorite who dominated the first Sin City even though he wasn’t a gigantic part of the film as a whole, Rourke’s animalistic bombast suiting the character and his demeanor perfectly. Rodriguez and Miller were smart to find a way to use him more this time, this pugilistic wrecking ball appearing in all four tales becoming a vital cog in three of them. The opening segment revolving entirely around him is easily the film’s best vignette, his taking out of a cadre of upper-crust trust fund college nincompoops a bloody descent into giddy madness the rest of the picture has trouble equaling.

Problem is, because this is all artifice, because everyone is a noir caricature and not a three-dimensional flesh and blood creation, caring about anything that’s happening is close to impossible. More than that, few of the talented actors filling the roles are able to tap into the smarmy skins of their respective characters, only Rourke and Boothe rising above the fray tapping into the giddy cartoonish gruesomeness of Rodriguez and Miller’s world. Not even Green, so stunning as a similar sort of vixen in 300: Rise of an Empire (itself also based on one of Miller’s graphic novels), can create much in the way of heat, which is really saying something considering she spends almost half her screen time nakedly on display for the world to savor and salivate over. 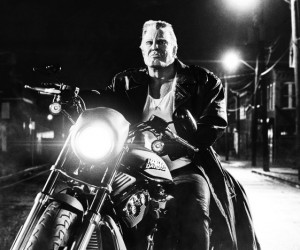 If not for the snappy dialogue, bursts of adrenaline-fueled abandon and idiosyncratic narrative fury the first Sin City would have been nothing but a lust-filled masculine fantasy designed entirely for the prurient eyes of 13-year-olds too young to know exactly what it is they’re salivating over. This time around, Rodriguez and Miller dispense almost entirely with the subtext and just revel in said fantasies, allowing their adolescent minds to blossom in full-force forgetting to craft situations and stories that could appeal to more than just those with the basest and most libidinous of appetites.

It does not help that the pair choose the worst of the four stories to end with, Alba’s revenge-driven assault indifferently staged and even more insipidly structured. There’s no drive to the events, no power to the emotions forcing her into action, and by the time she puts her plans into motion I almost needed someone to nudge me back awake as I was incredibly close to nodding off in disinterested boredom. The whole bit is as pitiful as it is forgettable, everything leading to a conclusion that is both forgone and ridiculous each at the exact same time.

There’s not a lot more to add. Those waiting with bated breath for this sequel to arrive will want to rush out and give it a look no matter what I say while everyone else will wonder why so much fuss for a motion picture that took nine long years to finally see the light of day. While not deadly, Sin City: A Dame to Kill For barely has a pulse all the same, watching it about as much fun as eating a knuckle sandwich or getting hit over the head with a tire iron, and I for one don’t find either enjoyable and as such I don’t intend to be watching this sequel again anytime soon.