“Well, Mr. Cantor, to be brutally frank, you have the reputation of taking over everything you participate in.” 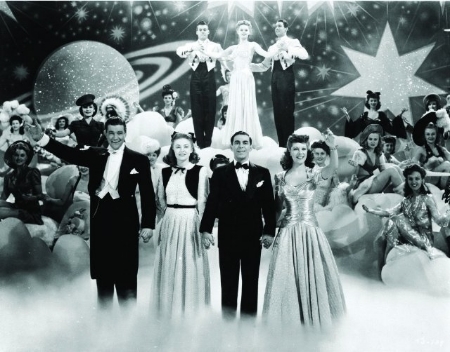 If Thank Your Lucky Stars had been made either in the 1930s or after WWII had come to an end, it would have been an 80 minute comedy about a couple of youngsters, singer Tommy Randolph (Dennis Morgan) and songwriter Pat Dixon (Joan Leslie), trying to make a go off it in the entertainment industry, mixing things up with radio and movie comedian Eddie Cantor as they go about their attempt. But because it was made in 1943, right at the start of the war, with soldiers on the march and things exploding around the globe, it is instead a star-studded, 127-minute behemoth featuring the likes of Bette Davis, Humphrey Bogart, Errol Flynn, Dinah Shore, Olivia de Havilland, John Garfield, Ida Lupino, Ann Sheridan, Jack Carson, Alexis Smith, Alan Hale and Hattie McDaniel (amongst many others) all appearing as themselves poking fun at their respective showbiz personas all in an attempt to keep the troops entertained. It’s wild, unpredictable and unbelievably over the top, filled to the brim with nonsense and not caring a lick that the audience is in on the joke right from the start.

Ostensibly, it’s the chronicling of promoters Dr. Schlenna (S.Z. Sakall) and Farnsworth (Edward Everett Horton) putting together a massive USO showcase to raise money for the troops, assembling a cavalcade of movie stars to help them do it. But both feel the show won’t be a success unless singer Dinah Shore is a part of the proceedings, and to get her they must appease Eddie Cantor, the one who holds her contract, and he’s the last guy they want as part of the extravaganza.

Mixed into the lineup are the attempts of Randolph and Dixon to garner their shot at stardom, while an Eddie Cantor lookalike – played by Cantor, of course – tries to be taken seriously as a serious actor when everyone he meets gets him confused with his comedic doppelgänger. It’s so convoluted, so crazy, so broadly structured it is impossible for any of the pieces to come together in anything close to an agreeable fashion, the script and story so messy and disheveled it’s kind of shocking it took five different writers to come up with this scenario in the first place. 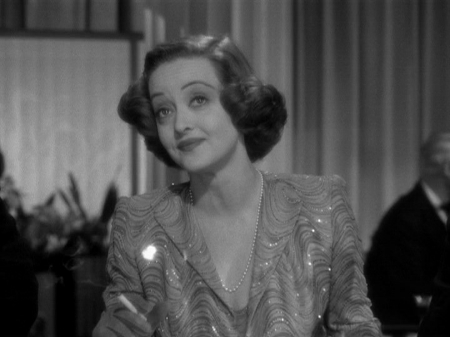 But it’s just so gosh darn entertaining! Boggie gets put in his place by his Casablanca costar and begins to wonder if his tough guy shtick is losing its edge. Davis delivers a heartbreaking rendition of “They’re Either Too Young, or Too Old.” McDaniel proves she’s more than her career of playing maids and mammies (she won the Oscar for Gone with the Wind) indicated, her singing of “Ice Cold Katy” explosively sensational. Best of all, Flynn mocks his own lithe, flamboyantly acrobatic action star image with “That’s What You Jolly Well Get,” as amusing, and as awkward, a musical number as I’ll ever likely see. Thank Your Lucky Stars might not be a great musical, but that doesn’t make it any less wonderful, and as an old Hollywood artifact of a bygone era of big screen entertainment that’s disappeared forever it’s a fantastically fun smorgasbord of silliness worthy of celebration.

Extras here (save one) are ported over from the previous DVD release and include:

Food and Magic (9:23) – Vintage short asking wartime viewers to make sure and not waste food

Falling Hare (8:28) – Classic Bugs Bunny short with the animated rabbit facing off against a rather nasty gremlin

Little Red Riding Rabbit (7:03) – Bugs is back, this time going up against the Big Bad Wolf

Three Cheers for the Girls (16:24) – A rather long, yet still entertaining, vintage featurette designed as a tribute to the women of the chorus

Watch on the Rhine Theatrical Trailer (2:13)

Just a reminder, as this title comes from the Warner Archive Collection it is manufactured on demand (MOD). For more info, go to www.WarnerArchive.com.

Thank Your Lucky Stars is an awfully odd comedy-musical extravaganza, and it’s certainly a product of its time. Yet the film is massively entertaining all the same, and watching some of Hollywood’s biggest, most powerful and more magnetic movie stars play fast and loose with their screen personalities is a total hoot start to finish. Warner Archive’s Blu-ray presentation is glorious and as such comes highly recommended.