After journeying to the far reaches of the Nine Realms in order to face down the demonic Surtur (Clancy Brown) and stop Ragnarok, the prophesized end of Asgard, the God of Thunder Thor (Chris Hemsworth) returns home only to find his formerly deceased brother Loki (Tom Hiddleston) very much alive. Not only that, he’s sitting on Asgard’s throne impersonating their father, Odin (Anthony Hopkins), the devious trickster trapping him back on Earth in a home for the elderly. Heading out to return him back where he belongs, turns out dear old dad isn’t quite ready to depart his new place of residence, instead choosing this moment of family reunion to warn of a new danger coming the brothers’ way. Imprisoned for more than a millennia, Hela (Cate Blanchett), the Goddess of Death, is going to return to Asgard, and even with all they’ve both seen and the conflicts they’ve been a part of, the level of destruction she will unleash upon the Universe will be unlike anything either Thor or Loki could begin to imagine. 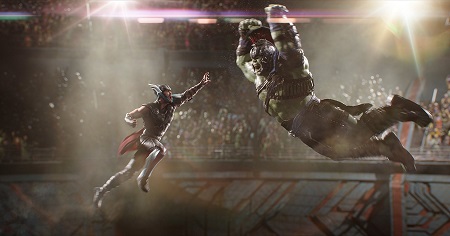 Thus begins Thor: Ragnarok, director Taika Waititi’s colorfully wild, imaginatively bizarre entry into the Marvel Cinematic Universe (MCU), the creatively idiosyncratic What We Do in the Shadows and Hunt for the Wilderpeople filmmaker going all out to in order to bring his vision for the God of Thunder to life. Overstuffed, filled with a plethora of subplots going off on so many different tangents keeping track of them all proves to be next to impossible, this follow-up to 2013’s underwhelming Thor: The Dark World is still rather wonderful. A full-bore comic book extravaganza that pushes things into a comedic territory well beyond even that found in the two Guardians of the Galaxy films or in 2015’s Ant-Man, Waititi reinvigorates this franchise with refreshing enthusiasm, producing a standalone piece of the MCU that’s an out-and-out delight.

The best bits take place on the planet of Sakaar, a refuse-filled wasteland where all the Universe’s garbage finds itself dumped. Lording over things is the cartoonish Grandmaster, played with all the gusto, enthusiasm, snark and bemusement Jeff Goldblum can muster. It’s everything fans of the actor have loved for decades only the volume is turned up well past 11, making this a scene-stealing tour de force that’s an absolute hoot to behold. Even better, however, is Creed and Dear White People star Tessa Thompson. She’s Valkyrie, an Asgardian warrior who fell to Sakaar eons ago and has eked out a drunken living selling potential gladiators to the Grandmaster ever since. Thompson is a lightning bolt of ingenious carnage as far as the MCU is concerned, this badass heroine more Snake Plissken than she is Black Widow or Scarlet Witch, and I mean that as a major compliment.

Then there is the arrival of Hulk (Mark Ruffalo). Having been fighting in the Grandmaster’s arena for who knows how long, the monstrous green Avenger hasn’t been Bruce Banner for quite some time, the God of Thunder’s arrival on Sakaar forcing an existential crisis for the hero that pits one side of his personality against the other. Ruffalo is having a blast playing these two halves of the same pie, and whether he’s talking about the eternal flame raging within as Hulk while conversing with a mystified Thor or having a panic attack while as Banner as he contemplates making what might be an ultimate sacrifice in order to save the Universe one more time, there’s little he does that isn’t wonderful. Heck, I think if Hemsworth and Ruffalo ever felt compelled to star in a remake of any of Steve Coogan and Rob Brydon’s The Trip comedies I’d watch them do it no questions asks, hoping that if they do then they do so as Thor and the Incredible Hulk.

Waititi directs with same cocksure abandon he’s brought to his string of low budget hit New Zealand comedies, keeping things character-driven and focused on the bigger picture for every beat of this gonzo story’s expedition towards rebellion and apocalypse. He allows production designers Dan Hennah (The Lord of the Rings: The Return of the King) and Ra Vincent (What We Do in the Shadows) the freedom to construct worlds and environments that feel fresh and new yet also still link to the previous Thor adventures nicely. At the same time, Waititi grants composer Mark Mothersbaugh (The LEGO Ninjago Movie) the opportunity to shake things up as much as possible as far as the music is concerned, the score a restless bit of electrifying melodious mayhem that suits the director’s vision for this psychedelic wonderland magnificently.

Not to say the film doesn’t still suffer from a few of the MCU’s more consistent problems, the chief of which is an underwhelming villain who never quite lives up to their more than substantial potential. While Blanchett does her scenery-chewing best, Hela isn’t a well-developed baddie whose very presence sends chills up the spine. The actress looks terrific, and her first scene staring down Hemsworth and Hiddleston while her character does quite the number on Thor’s hammer Mjolnir is suitably spectacular. But overall Hela’s really never as imposing as her reputation leads the viewer to believe, and had a lesser actress not suited up to portray her I doubt there’d be any reason to care about this Goddess of Death whatsoever.

I can’t really blame Blanchett. As witty and as inspired as much of Eric Pearson, Craig Kyle and Christopher L. Yost’s script might be, it’s also so insanely convoluted there just isn’t time to explore all of the varying tangents it so merrily introduces. Not only does this mute Hela’s effectiveness, it also produces instances where key supporting characters from the previous Thor films are relegated to nothing more than cannon fodder, a fair number of them getting killed off so unceremoniously it’s a question whether or not they picked up a paycheck for their troubles. There’s also the gigantic red herring introduced at the film’s beginning, Surtur’s confrontation with Thor so brief and inconsequential it’s almost a given things will get twisted in a way to allow him to make a not-so-surprising surprise reappearance at some point during all this ridiculously chaotic Norse-inspired madness.

Even so, Thor: Ragnarok proves to be so creatively loopy, not to mention so consistently hysterical, I found it hopeless not to enjoy myself while sitting in the theatre watching things play themselves out to their conclusion. From being the first part of this particular trilogy to actually utilize Idris Elba’s intergalactic gatekeeper Heimdall in a manner befitting his suitably imposing stature, to featuring a final battle where Thor, Loki, Hulk and Valkyrie pull out all the stops in attempting to stop Hela from waging war against the Universe, I found a great deal to love. As for Waititi, he acquits himself marvelously, his directorial leap into the Hollywood comic book big time as major a deal as Joss Whedon’s (The Avengers), James Gunn’s (Guardians of the Galaxy) or Patty Jenkins’s (Wonder Woman) were before him. He delivers the goods, and for fans of the MCU his arrival ends up being a breath of fresh air worth getting excited about.