Lara Croft’s first adventure, heading to an isolated island shrouded in ancient mystery in an attempt to discover what happened to her missing father, Lord Richard Croft, seven years prior.

Here’s what I wrote about Tomb Raider back in my original theatrical review: 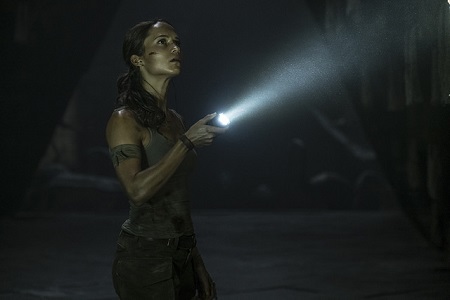 “It’s been seven years since businessman, philanthropist and archeology enthusiast Lord Richard Croft (Dominic West) mysteriously disappeared. In all that time his headstrong daughter Lara (Alicia Vikander) has stubbornly refused to believe he was dead. After discovering he had left her clues only she would be able to decipher, the young woman learns he went off to hunt for a mysterious island somewhere off the coast of Japan. With only his notebook to give her hints on where to search, and after hiring the son, Lu Ren (Daniel Wu), of a boat captain who originally took her dad on his ill-fated journey, Lara charts a similar course into the unknown.

What the pair discovers goes far beyond anything they could have imagined. For seven years, psychopathic madman Mathias Vogel (Walton Goggins) has been stranded on an island searching for the tomb of a mythical priestess who was believed to have the power over life and death. It was this discovery Lord Croft was desperately trying to stop, the not-so-amateur adventurer certain that if this crypt was opened the results would be globally catastrophic. Now it’s up to his daughter to finish what he started, Lara determined to make certain that Vogel pays for his crimes and the secrets hidden inside this tomb remain undiscovered.

Movies based on video games haven’t exactly had the best track record. Great directors like Mike Newell (Prince of Persia: The Sands of Time) and Justin Kurzel (Assassin’s Creed) gave it their best shot yet still failed to deliver anything worthwhile, while the less said about adaptations like Doom, Hitman, Max Payne, Street Fighter, Warcraft, Need for Speed, Super Mario Bros., Wing Commander and so many others the better. The only truly successful effort was the Resident Evil franchise, which spawned six features (last year’s Resident Evil: The Final Chapter being the last one), director Paul W.S. Anderson’s 2002 first film arguably the most enjoyable of the set.

There’s little that could be construed as moderately positive to be said about 2001’s Lara Croft: Tomb Raider and its 2003 sequel Lara Croft Tomb Raider: The Cradle of Life, both starring Angelina Jolie as the titular heroine. The first one, while a critical failure, proved to be something of a box office surprise, however, while it also cemented Jolie’s status as a global superstar. The follow-up did not meet with the same fate. While a little better received by critics, it was also clear audiences had felt burned enough by the initial entry in the erstwhile franchise they had no intention to come back for seconds. It seemed like this was the end of the line for Lara Croft as far as her cinematic adventures were concerned, and considering no other video game adaption outside of Resident Evil was making any sort of profit it was doubtful a Hollywood studio was going to take another chance on the character anytime soon.

Until now. Cutting itself off from the Jolie efforts entirely, using the latest, incredibly popular video game as its chief inspiration, Norwegian director Roar Uthaug’s Tomb Raider takes Lara Croft back to her roots, showcasing an energetic, emotionally unstable yet incredibly intelligent firebrand just beginning to find her way in the world after unspeakable tragedy has left her feeling lost and alone. While screenwriters Geneva Robertson-Dworet and Alastair Siddons (Trespass Against Us) hardly reinvent the archeological adventurous wheel, cribbing freely from Raiders of the Lost Ark whenever and wherever they can, they’ve still managed to craft an engaging yarn that puts more emphasis on its characters than it does on mindless action set pieces that do little to move the story forward. This is the first video game adaptation that proves to be worth watching start to finish, and while the bar for these sorts of films has been undeniably low, that doesn’t make Tomb Raider any less entertaining.

Part of me isn’t surprised by this. Uthaug has a consistent track record of taking tired, overwrought genre entries and making something sensational out of them. His 2006 horror opus Cold Prey about a group of young snowboarders stranded at a secluded ski chalet has slowly spent the last decade becoming something of an under the radar slasher classic, while the director’s 2015 disaster epic The Wave was a legitimate Oscar contender after Norway submitted it as the country’s Best Foreign Language Film entry. The reason those features worked so well is that Uthaug put the emphasis on the characters first and crafting a compellingly authentic atmosphere for them to live in second while leaving the expected genre tropes of both in a distant third. He knew that to ratchet up tension and suspense one actually had to care about the individuals fighting for their lives, and while he had a noticeable flair for staging action it was also just as evident he wasn’t going to throw in some random jolt of adrenaline just because.

This is a director who has made his career trusting his audience, and it is that sort of touch he brings to this. There aren’t any real surprises, no real shocks as they pertain to Lara’s journey or the discoveries she is going to make while she is on it. But Robertson-Dworet and Siddons keep things moving at a crisp pace, constructing believable characters in relatively brief brushstrokes most of whom are complicated enough to stay interesting for all of the story’s 118 minutes. As for Uthaug, much like he did with Cold Prey, he doesn’t just jump right in as far as the death-defying craziness is concerned. While he does stage a couple of brief sequences of action, they’re based in character, each helping to define Lara as she takes her first steps into the unknown. The first massive set piece doesn’t happen until almost the halfway point, and as crazy as it is Uthaug never loses sight of the fact that whatever happens has to affect his heroine on an emotional level otherwise there’s no point for any of these theatrics to exist.

It’s still pretty thin from a narrative standpoint, and as terrifying as Goggins is Vogel still isn’t the towering villain a film like this needs in order to be truly memorable. I also find it interesting that Uthaug and the screenwriters choose to put so much emotional emphasis on a scene where Lara is forced to defend herself in a way that results in the loss of life, her clearly distraught reaction to what she’s done obviously difficult for the young woman to deal with. But moments later she’s going after Vogel’s henchman with a bow and arrow as if she’s a seasoned soldier who has spent years on the battlefield, this sudden ease with which she is able to use lethal force not entirely convincing. 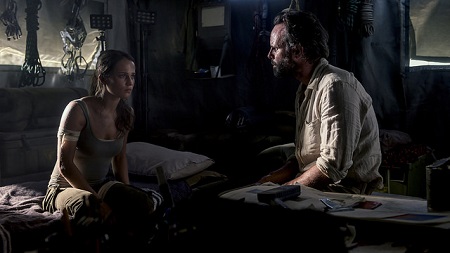 Who am I kidding. Tomb Raider is a total kick in the pants and I had a terrific time watching it. As strong as Jolie might have been as the character previously, she was never given the same freedom to evolve and emote as Vikander has been granted, and to say The Danish Girl Oscar-winner makes the most of the situation would be a decided understatement. She thrives as Lara Croft, constructing a three-dimensional adventurer who is just as apt to use her brain as she is her brawn, Uthaug refreshingly giving the actress the flexibility to make the character her own. This is a good movie. Suffice it to say I honestly can’t wait to see it again. Here’s hoping general audiences end up feeling the same.”

I’ve seen Tomb Raider four times now, which is the most I’ve watched any single 2018 release so far this year. That probably says it all, I’m assuming, and even if this isn’t close to being the best film I’ve seen in the past six months, it’s certainly become the most enjoyable one to rewatch. If that’s not a full-throated recommendation, I’m not sure what would be. 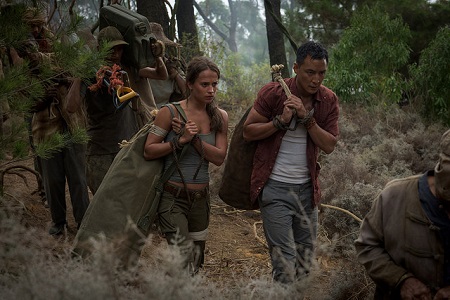 Tomb Raider: Uncovered (7:06) – Standard behind-the-scenes piece with various interviews with members of the cast and crew.

Breaking Down the Rapids (5:34) – Fairly typical breakdown of the effects, both virtual and practical, required to bring one of the film’s central action sequences to life. It’s fine.

Lara Croft: Evolution of an Icon (9:53) – A history of the Tomb Raider video games.

I really wish Tomb Raider had done better here in the U.S. because this is one time where I’m interested in seeing a video game movie become an actual bona fide action franchise. I really enjoyed this movie and find Vikander to be perfect as Lara Croft. This is a terrific little adventure, and as far as 4K Ultra HD presentations are concerned the one Warner Bros. has put together for this release is pretty close to perfect.