Seasoned private investigator Larry (Lawrence Michael Levine) is hired to find a missing college student. He is joined by his assistant Ayesha (Kelsy Abbott), the pair breaking into the young man’s house only to discover pile upon pile of used VHS tapes haphazardly scattered in front of a flickering television. While he investigates the darkened home, Larry leaves it to Ayesha to take a look at some of the tapes, each one showcasing a bizarre story of gruesome terror filmed from a first-person perspective as if the events being shown were actually real. 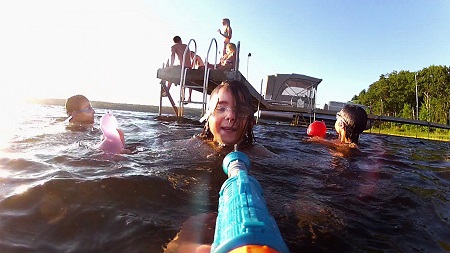 Horror anthologies, as noted in my review for last year’s V/H/S, are a bit tricky to pull off successfully. They’re usually a bit too long, quality levels waver from story to story and finding any sort of consistency between all the vignettes is close to impossible. The best ones are very few and extremely far between, and while genre directors tend to love participating in them the chances they’re going to pull off something memorable are extremely slim indeed.

All of which is what made the first V/H/S such a rarity. Even with its flaws, even though some of the bits didn’t work all that well, even though it was in fact a good ten, maybe even 15 minutes too long, the concept was such a good one and the directors involves so energetically creative in seeing if they could pull it all off the highs outnumbered the lows by an extremely wide margin. As far as found-footage is concerned, the movie didn’t so much reinvent the wheel as it patched a few noticeable holes and made sure the air pressure was on point. It worked, plain and simple, the memorable moments so terrific it was easy to forgive many of the anthology’s more noticeable shortcomings.

Less than 12 months later, producers/writers/directors Simon Barrett and Adam Wingard have managed to cajole another group of talented filmmakers to take their crack at the concept, and results are, to be perfectly frank, close to astonishing. V/H/S 2 doesn’t just improve upon the first film, doesn’t just take note of its missteps and mistakes, it quickly enters the pantheon as one of the great horror anthologies ever made, and save for one short segment that’s more hectic than horrifying this streamlined, highly imaginative and gloriously entertaining 96-minute freak-out has got to be one of 2013’s most pleasurably terrifying roller coaster rides.

“Tape 49,” written and directed by Barrett (who also appears in a small supporting role), is the framing short used to get this show going, and it’s vast improvement over the headache-inducing mess that set things in motion in the original. Quick, to the point and uncomfortably unsettling, watching Larry and Ayesha snoop around is a great counterpoint to the chaos and mayhem that is going to ensue, their gradual psychological devolution easy to relate to.

Two solid shorts roll on from there, Wingard directing and starring in the uncomforting “Phase I Clinical Trials” (written by Barrett) revolving around a man who receives an experimental retinal implant which records his everyday doings while also gives him the unsettling ability to see and interact with dead people, while Blair Witch Project teammates Gregg Hale and Edúardo Sanchez join directorial forces on “A Ride in the Park,” a giddily awesome bit of zombie mayhem shot and told from the perspective of a recently bitten sap who only wanted to spend a little time mountain biking in the great outdoors (his camera is attached to his helmet). Both shorts are fast-paced, unusual, and highly original, each showcasing bits of murderous slight-of-hand and mayhem that’s positively inspired.

But it’s the next short that makes V/H/S 2 an almost instant classic. From the warped minds of Gareth Huw Evans (The Raid: Redemption) and Timo Tjahjanto, the pair’s “Safe Haven” follows a documentary film crew given exclusive access to a mysterious Cult leader, known only as ‘Father’ (Epy Kusnandar), and the Armageddon end-of-days-type chaos the coincides with their arrival. The whole thing is a mind-blowing hoot, escalating moment to moment and scene to scene in a way that defies both belief and description. Exceedingly intense, shockingly terrifying, the whole things builds to a demonic conclusion that had me spitting out my popcorn in revolted glee, the last line of the story coupled with the look on our beleaguered hero’s (Fachry Albar) face worth the price of a midnight ticket all on its own. 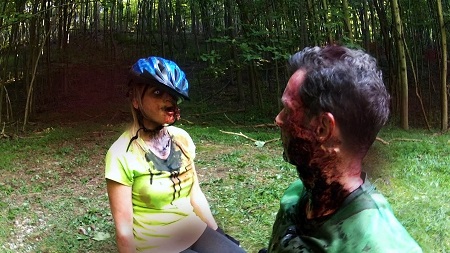 Only the last story, the certifiably insane “Slumber Party Alien Abduction” co-written and directed by Jason Eisner (Hobo with a Shotgun) falls a little bit short, but even it has enough imaginative moments (the majority is filmed from the family dog’s point-of-view, the teenage protagonists strapping a camera to his back as a joke only to find it stuck there when otherworldly beings come knocking on the door) to make up for the majority of its defects. It’s a bit too hyperactive, a little too overly frenetic, and it’s not like we spend near enough time with the kids to make what they’re going through connect on anything more than a strictly superficial level. But it’s constantly intriguing, the puppy POV undeniably inspired, and while it’s the only segment that does go on a little too long I can’t say I was ever close to bored by any single second of it.

Wingard and Barrett, the pair have the much-buzzed horror-thriller You’re Next hitting theatres in August, while their 2010 shocker A Horrible Way to Die has quietly built a passionate following on Blu-ray and DVD, have hit onto something with their analog anthology series, and it will be interesting to see who they line up to take the directorial reigns next. No matter what happens, nothing changes the fact that V/H/S 2 is a superior follow up to a solid original that outdoes and outclasses it in every way that matters. It’s a superior collection of twisted little scares, Evans and Tjahjanto’s “Safe Haven” easily one of the great horror shorts I’ve ever had the pleasure to see.