A single mother and Los Angeles businesswoman (Season Hubley) secretly moonlights as a prostitute known only as “Princess” to help make ends meet. When one of her friends is brutally beaten and tortured by notorious pimp Ramrod (Wings Hauser), Princess is blackmailed by LAPD Detective Tom Walsh (Gary Swanson) to go undercover for the police in order to bring him to justice. Things do not go as planned. 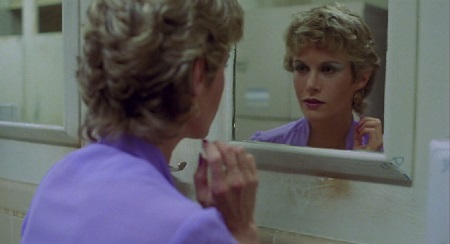 I’d heard a lot about director Gary Sherman’s 1982 cult curiosity Vice Squad over the years, not all of it positive. But considering how much I love his 1981 horror favorite Dead & Buried, and considering the soft spot his raucous, unpretentiously enthusiastic down-and-dirty 1986 actioner Wanted: Dead or Alive (a pseudo-sequel to Steve McQueen’s classic 1958 television series) starring the late, great Rutger Hauer hold in my heart I’ve been clamoring to give this one a look for a quite some time. But for whatever reason getting my hands on a decent copy of the film has always been oddly difficult, and as such this is one hole in my grimy 1980s cinematic education I hadn’t been able to fill.

Until now. Thanks to Scream! Factory, Vice Squad doesn’t only get a decent hi-def presentation, it gets a borderline spectacular one. As purposefully cheap as it all looks (and, new 4K scan of the negative notwithstanding, as in disrepair as the original elements likely were), this is still a superb presentation of the 37-year-old thriller. Couple in the massive array of extras that have been compiled for this release, I can’t imagine this title ever getting a better collector’s edition Blu-ray. It’s spectacular, and for fans of the film this is an outstanding release worth doing backflips over.

As for the motion picture itself, I get why it has stood the test of time. Sandy Howard, Kenneth Peters and Robert Vincent O’Neil have composed a suitably violent, belligerently ugly scenario that crash-lands face-first into the Hollywood depravity this era was in large respects known for. The midnight streets of Los Angeles are not a candy-colored playground where a secret princess waits to be rescued by her prince charming (Pretty Woman this most definitely is not). Instead, they are a breeding ground for all kinds of degradation and filth, young people of all backgrounds, ethnicities, genders and sexualities all intermixing together as they all look for better lives only to find they are becoming increasingly buried underneath the toxic muck and mire of abuse, self-loathing and societal degradation that is consistently being heaped upon them.

It’s slickly noxious stuff, and Sherman doesn’t shy away from any of it. He also allows Hauser the freedom to create one of the more ghoulishly venal psychopathic villains of the ‘80s, the veteran B-grade character actor giving everything he’s got to bring Ramrod to life. In many ways it’s a pity that Swanson is unable to match him beat-for-beat as his Det. Walsh isn’t that great a guy or a paragon of virtue himself. He’s in many ways the law and order mirror image of the criminal he’s chasing, and as confidently as the actor portrays him he just can’t generate the same type of viscerally electrifying intensity that Hauser brings to the material. 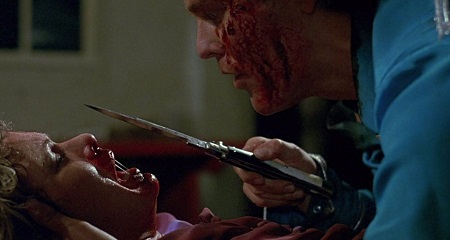 Hubley, a very good actress who is likely best known for her brief cameo in John Carpenter’s Escape from New York and was never given the chance to breakout whether on television or in the movies, is almost mesmeric as Princess. She has an ethereal quality that’s close to incredible, the actress holding the screen was almost shocking ease. There is a sad, winsome loneliness to her performance that couples nicely with the steely resolve Princess is often forced to fake to suss out if a potential “date” is on the level or when she’s trying to seduce Ramrod into disclosing incriminating information Det. Walsh can use against him. Hubley’s great, the compellingly heartfelt sense of personal isolation she brings to the story bordering on unforgettable.

I’m not sure how much I liked Vice Squad on the whole. As I’ve already mentioned, I get why it has stood the test of time, and in many respects this might just be Sherman’s finest hour behind the camera. Still, make no mistake, this is as repellently amoral and ugly a motion picture as I any I could have imagined watching before I slipped the Blu-ray into the player, and as much as I respect and admire what the filmmakers were aiming for here, I honestly can’t say I enjoyed sitting there for all 97 minutes as I took it all in.

This is an incredible lineup of extras. Both commentary tracks are outstanding. Each interview featurette is spectacularly in-depth. The location short is a heck of a lot of fun, especially as it showcases the passage of time in Los Angeles over the past three-plus decades. I loved all of it. Scream! Factory has outdone themselves.

Vice Squad is a product of its time. It’s an ugly film, one that digs into the muck and mire of the world it presents with almost gleeful gusto. All of which makes it easy to understand how Gary Sherman’s dramatic thriller has somehow stood the test of time. Scream! Factory’s Collector’s Edition Blu-ray release is nothing less than outstanding, and for fans picking this one up for their personal libraries is a total no-brainer.