At a small Arkansas hospital, nurse Mandy (Angela Bettis) is starting her overnight shift. Before things get rolling for the evening, she meets her flighty cousin (by marriage) Regina (Chloe Farnworth) out by the loading dock next to the soda machine. Mandy has a small lunchbox she needs to give her which contains a plastic bag filled with expensive human organs, including a vitally important kidney someone is paying big bucks for.

Turns out, Mandy and her fellow nurse Karen (Nikea Gamby-Turner) are part of a highly illegal (yet incredibly profitable) organ smuggling operation, and Regina is their bubbly courier who giddily transports their ill-gotten gains to the moneyman who’s financing their ghoulish heists. But when she loses the kidney all hell breaks loose. Regina returns to the hospital to try to find an emergency replacement. This puts Mandy in an untenable position where her fear of getting caught by the police (or even worse, her supervisor) is only mitigated by the growing anger she’s feeling towards her cluelessly moronic cousin.

In writer/director Brea Grant’s murderously goofy pitch-black horror-comedy 12 Hour Shift, blood flows freely and just about everyone who appears up on the screen can meet a sudden, unexpectedly violent end. This is an agreeably nasty workplace satire overflowing in whimsical moments, grotesque twists of fate and unforeseen emotional nuances that both tickled my funny bone and gave me a thing or two to think about in greater detail. It’s a spiritedly entertaining bit of unrelenting nastiness, all of it centered on a strong performance from the versatile Bettis that’s outstanding.

What I think I admired most about what Grant does with all of this is that she doesn’t push the growing hyperbolic lunacy of the situation straight into the viewer’s face. Things don’t spiral out of control so much as they just sort of lackadaisically build into increasingly violent insanity with each passing minute. While Mandy tries to figure out which of the hospital’s current patients wouldn’t be missed so she can snag another kidney, Regina takes it upon herself to try and do the slicing and dicing all on her own with predictable results.

I was a little taken aback by how attentively humanistic the film could be in regards to digging underneath the surface of characters who aren’t anywhere near as cold-blooded or as sadistic as their little organ harvesting gig might lead one to initially assume. Mandy, in particular, has a rich backstory that’s subtly hinted at and fleshed-out throughout the story, little scenes sprinkled here and there adding knowing bits of intimately affecting introspection that took me by surprise.

There’s a subplot involving a cop-killing convict (played with agreeable side-eyed intensity by David Arquette) that sadly doesn’t pay itself off all that well. I also can’t say the threat offered up by the thug sent to stalk Regina and ensure she finds a new kidney (lest she’d be forced to part with one of her own) ever amounted much. I’d also be remiss if I didn’t admit to feeling like Grant’s wacky little endeavor runs out of steam right at the end. While the climax hits all of its requisite freewheeling marks and smacks a number of the preordained comically bloody buttons, it all still left me a tiny bit cold.

None of this matters near as much as it probably should have. Thank Bettis. She’s terrific, the increasingly mesmeric complexity of her performance marvelous. She has a way of delivering a withering stare of deathly truthful indignation that made me feel like she was looking through the camera and silently judging me as I sat there and watched the movie. The actress showcases a steely ferocity that rarely cracks under pressure and refuses to succumb to depressed exhaustion even when all hope appears to be lost, Bettis elevating 12 Hour Shift to her high standards of perfection almost by sheer force of her own substantive will. 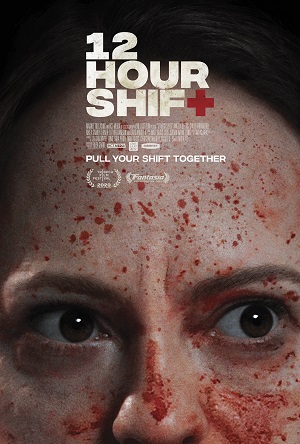