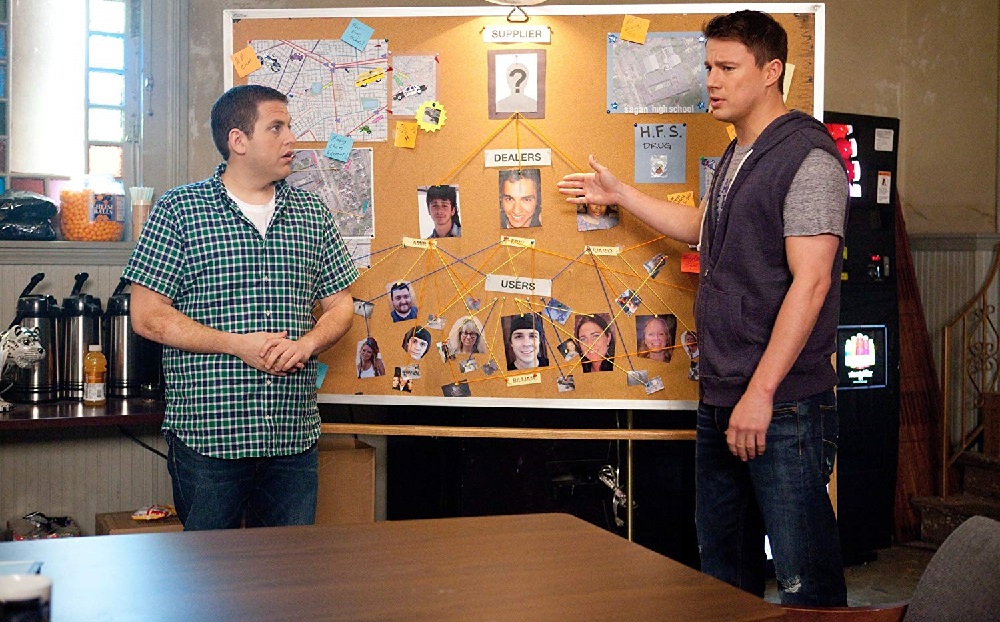 The only thing one needs to know about this cinematic remake of the 1980s television favorite 21 Jump Street is that it’s funny. Plot? Who cares. Acting? Doesn’t particularly matter. Continuity? Narrative structure? Character development? None of it rears its head. More surprising, none of it actually needs to. The movie is a clever, often hilarious, consistently amusing frolic that plays a bit like a Laurel and Hardy or a Marx Brothers comedy only with a purposefully obnoxious R-rated bent.

Okay. I’m not saying this skit-like spectacular, co-written by star Jonah Hill and Michael Bacall (Project X, Scott Pilgrim vs. the World) and directed by Phil Lord and Chris Miller (Cloudy with a Chance of Meatballs), is on the same plane as something like Buck Privates or Duck Soup. But At the Circus? Abbott and Costello Meet the Invisible Man? This movie could be the profane second cousin to those old Hollywood comedic frolics, and while taken as a whole I’d have to admit 21 Jump Street is somewhat lacking in certain important areas where they pertain to narrative structure and character development, I still find it hard to dispute that the darn thing made me laugh start to finish for almost every second of its 109-minute running time.

Hill and costar Channing Tatum are Schmidt and Jenko, two rookie cops who were on opposite sides of the fence in high school but have managed to forge an adult friendship during their time at the police academy. When a routine bust goes spectacularly awry, the two find themselves reassigned to a secretive undercover unit led by Captain Dickson (Ice Cube). Their assignment? Head back to high school and figure out who is behind an outbreak of a new designer drug. But old habits and insecurities die hard, and a trip back to their teenage roots potentially puts Schmidt and Jenko’s brotherly bond at risk.

Again, forget about the plot. The truth of the matter is that no one involved appears to be concerned with that. What’s most fun is watching the byplay between Hill and Tatum, seeing how they smoothly interact with one another and the way they effortlessly tap into each other’s psyches. They are so in tune I got the feeling they’d been doing this sort of thing for years, each playing straight man or fall guy at any respective moment based solely on the needs of the gag or on what can help propel the movie forward for the better.

Tatum continues to surprise me. Forget about appearing in movies like Fighting or G.I. Joe: The Rise of Cobra. This guy isn’t an action star, at least not in my book, he just doesn’t seem like he’s interested in any of that tough guy bravado. But put him in something like this? Like a romantic charmer like The Vow? Like his debut dance-a-thon Step Up? Do that and he is virtually impossible to dislike. Heck, he even supplied the otherwise moderately dreadful The Dilemma with its only redeeming moments, the guy’s comedic timing so spot-on it honestly blows my mind.

The frustrating part of trying to review 21 Jump Street is that I can’t talk about any of the best bits without ruining them, but that’s just par for the course for any comedy that relies so much on sight gags, pratfalls and imbecilic shenanigans like this one does. All the same, I can say that I’m not certain any of this will play as well the second time around as it does the first, or that the action-filled finale has too much bombast and not enough bang, or that a romantic subplot revolving around Hill and female lead Brie Larson rings frustratingly flat. Those are items that keep this remake/riff/reinvention from achieving its full potential, all flaws I suspect will annoy me far more in the future than for whatever reason they do right now.

Thankfully, that right now is all that’s important at this moment, and 21 Jump Street is arguably 2012’s first major surprise success. Judging from the trailers, the early buzz and everything else I’d managed to hear about this production this was one comedy I wasn’t looking forward to. Now, part of me kind of can’t wait to get a look at it again to see if the gags hold up and to witness if the not-all-that-surprising climactic cameo still knocks my socks off. Bottom line? Hill, Bacall, Lord and Miller get far more right than they do wrong, and the fact I’m still chuckling thinking about the film a full week after seeing it says far more than any 800-word review ever could. 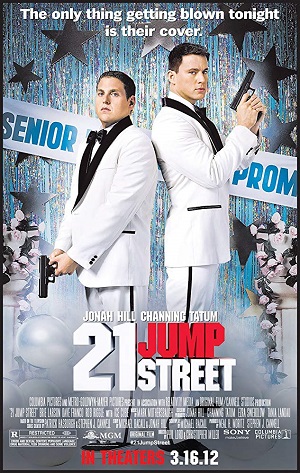