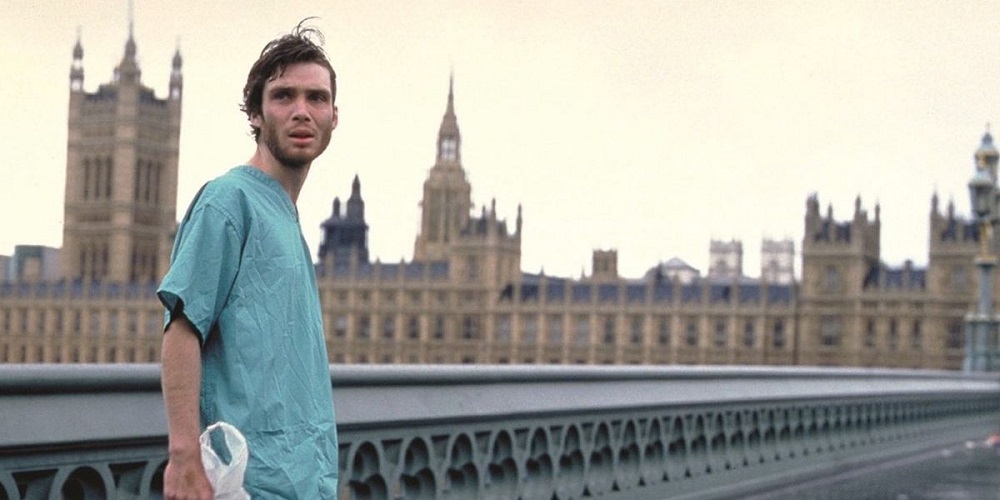 It’s one of those situations people have nightmares about but don’t actually happen. At least, that is what Jim (Cillian Murphy) keeps telling himself after waking up from a coma to find, not only the hospital, but also the entire whole of London, completely deserted. No one. Not a living soul. There is only chaos and destruction, and Jim is understandably perplexed to discover he’s seemingly the last man on Earth stranded in the middle of a dystopian wasteland.

If only that were the case. Instead, the whole of England has been hit with a vicious virus. Within seconds of being contaminated the unlucky individual goes from being a normal person into a mindless, inhuman zombie looking only to rip and tear every other living soul to pieces. Luckily for Jim, he’s saved from that fate by Selena (Naomi Harris) and Mark (Noah Huntley) before he can experience an infected person’s rage firsthand.

But how to survive in a world gone carnivorously mad? Companionship is a place to start. That’s what is keeping devoted father Frank (Brendan Gleeson) sane. It’s the reason he’s been searching out for other survivors, wanting to make sure he and his child, Hannah (Megan Burns), have more than just each other to fall back on if things get truly dire.

This is only the chilling opening act to Danny Boyle’s marvelous 28 Days Later…. An ingenious take on the old George Romero-style zombie movie, this straightforward and unsentimental horror film is one for the ages. Downright chilling, it scares in ways that took me continually by surprise, taking its subject matter seriously while refusing to inject the proceedings with any sort of self-deprecating sarcasm.

Boyle, the director of Shallow Grave, Trainspotting and The Beach, isn’t known for taking a direct storytelling approach. His hip, hyperkinetic style for both of those first two features, and not to mention his underrated Hollywood debut A Life Less Ordinary, was part of what gave each picture their kick. That tactic didn’t serve the director near as well with The Beach, and I, for one, started to feel like Boyle’s cynical, over-stylized aesthetic was starting to grow a little stale.

But a horror yarn based on and utilizing principals that have been poked fun at ever since the first walking dead strode across the screen? Can’t say I saw that coming. The terror, drama and humor of 28 Days Later… flows directly from the organic structure of writer Alex Garland’s magnificent script. But it also because Boyle infuses the material with a dream-splattered immediacy that echoes the psychologically beaten-down reality of these first few years of the 21st century.

It also helps that the filmmaker stages some monumentally intense set-pieces. That first walk by Jim through the empty streets of London is a doozy, as is a journey through an underground tunnel as the newly formed quartet tries to flee out of the city. I also loved a group of soldiers surviving on the outskirts of the city led by the great Christopher Eccleston. They’re just as scared and alone as those they are supposed to be attempting to save are, and their motivation to keep doing this job even after it appears all hope has been lost is maybe being even more horrifying than the zombie menace lurking outside the door.

It should be noted that this thriller is no walk in the park. At over just 110-minutes, the methodical pacing does take some getting used to, while the graphic violence isn’t going to be everyone’s cup of tea. Bale and cinematographer Anthony Dod Mantle have also shot the picture digitally, and this has the effect of giving the proceedings a viscerally immersive feel, the overly bright, exceedingly grainy images taking some getting used to.

Not that I care. Impeccably acted, scored and edited, Boyle’s latest is a pulse-pounding sensation that grabbed me by the throat and then refused to let go. It may be harsh, but 28 Days Later… scared the living daylights out of both me as well as the preview audience I had the good fortune to watch it with. Make no mistake, this isn’t just one of the best films of this year, it’s one of the best I’ve had the good fortune to see this young millennium. 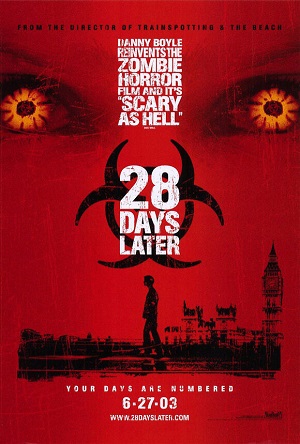