“The world will know that free men stood against a tyrant, that few stood against many, and before this battle was over, even a god-king can bleed.”

Here’s what I wrote about this one back in March of 2007:

“In 480 B.C., a time when reason and mysticism battled for supremacy, 300 Spartan warriors under the command of King Leonidas stood at the gates of their lands and fought to the death against Xerxes and his massive Persian army. Though their blood, sweat, toil, tears and destruction this small band of soldiers would inspire all of Greece to unite, drawing a line for democracy still celebrated to this day.

The realities of this tale for historians to debate, but under the pen of famed graphic novelist Frank Miller (Batman: Year One) this saga becomes a mythical story of blood-soaked inspiration. It is a drama filled with the pathos of seventeen epic adventures, all of it framed against the backdrop of a world on the brink of moving from the realm of the fantastical and into the modern age of intellectual reason.

Adapting Miller and co-writer Lynn Varley’s book for the big screen, Dawn of the Dead director Zack Snyder has crafted something with 300 the likes of which I cannot say I have ever seen before. His film is a parade of homoerotic mayhem and orgiastic violence, an aria of visual audacity and kinetic motion that I found very difficult to resist. This feature glued me to my seat, the windswept plains of ancient war as robust an as entertaining as any visual spectacle I am likely to see this year.

Yet, and I almost hesitate to admit this, I wanted more than what the movie delivered. While Snyder has achieved an experience altogether new, the emotional core of this one has unfortunately been dulled to a soft point. Spartan spears shatter bone, break necks and cause blood to spurt like Jackson Pollack blobs thrown against an empty white canvass. Yet the men who fearlessly hold them remain frustrating enigmas. We do not know who they are and thus we do not feel their pain, the filmmakers never attempting to dig inside Leonidas’ (vigorously played by Gerard Butler) head or his heart in any meaningful way.

As such, 300 suffers from many of the same flaws that afflicted Robert Rodriguez’s Miller adaptation Sin City. Like that film, this one is all surface, all attitude, all gloss. Snyder is more interested in setting the right beefy tone than he is at trying to explore anything akin to emotive depth. His obsession appears to have been to craft a one-of-a-kind visual marvel, and on that front he has succeeded brilliantly, while his attempts to analyze why an honored Spartan soldier picks up his spear to fight are facile, one-dimensional and more than a little bit masochistically pedestrian.

Thankfully, unlike Sin City these problems don’t diminish the film’s power to entertain. There is an energy, a pounding rhythmic intensity, to all this that’s spellbinding. The evil Xerxes (Rodrigo Santoro), beauteous Queen Gorgo (a superb Lena Headey), wordsmith soldier Dilios (David Wenham), duplicitous politician Theron (Dominic West) and the stalwart Captain (Vincent Regan) may not be particularly well fleshed out as characters, the passionate driving force driving each actor’s performance is so strong forgive me if I just don’t care.

This means Snyder’s opus does tend to defy normal film criticism axioms. This film is pure style over substance, visual razzle-dazzle trumping all things relating to narrative cohesion or character development. The director has fashioned an entertainment so well edited by William Hoy (Fantastic Four), realized by production designer James Bissell (Good Night, and Good Luck.), scored by composer Tyler Bates (Slither), visualized by effects supervisor Chris Watts (The Fog) and splendidly shot by cinematographer Larry Fong that frame-by-frame it blew my mind. It is a sensory cavalcade of sound and fury so all-encompassing I’ll still be sifting through its many layers for a long time to come.

Somehow all this is enough to warrant a recommendation. While I’d be lying if I said I did not want more, I’d be just as false if I failed to admit having a grand time sitting in the theatre watching the picture. Snyder and Miller wrapped me up within their story’s coils right from the first frame, refusing to let go even long after an army of Grecian soldiers finally took the field of battle to commemorate the Spartan’s honorable sacrifice. 300 is a bruising, battering, visually resplendent caterwaul of an action-adventure, and I imagine the fighting men and women it celebrates probably wouldn’t have had their story told any other way.”

The 4K Ultra HD disc ports over the excellent Audio Commentary with director Zack Snyder, writer Kurt Johnstad and cinematographer Larry Fong. All extras are contained on the previously released Blu-ray included with this set.

A Digital HD copy of the film is also included as part of this release.

300 hasn’t stood up all that well. It’s structural flaws regarding character development and story progression have only become more noticeable in the years since its original release. Yet the kinetic fury of Snyder’s box office smash cannot be denied. It’s numerous flaws notwithstanding, this is still a rousingly entertaining spectacle, and watching it again I was struck by just how absorbing I continue to find this film to be.

As for Warner’s 4K Ultra HD release, it’s perfect. Fans of the film are urged to snag this for their collections immediately. 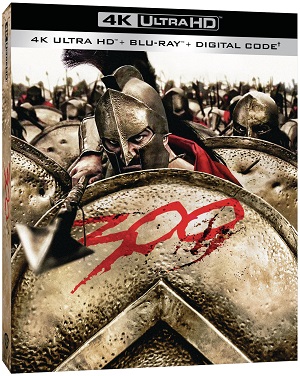