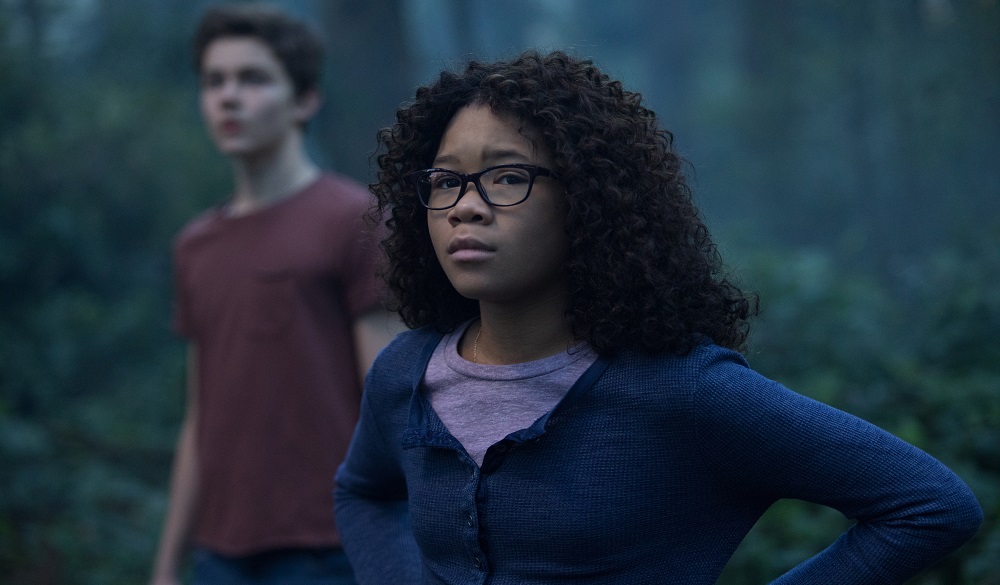 Meg Murry’s (Storm Reid) scientist father Dr. Jack Murry (Chris Pine) disappeared four years ago. Since then she’s been going through the motions of her life, the intelligent 12-year-old cutting herself off from almost everything that was once important to her save her mother Dr. Dana Murry (Gugu Mbatha-Raw) and her overly precocious adopted younger brother Charles Wallace (Deric McCabe). Just as things reach their emotional low point, Meg is visited by three strange women, Mrs. Which (Oprah Winfrey), Mrs. Whatsit (Reese Witherspoon) and Mrs. Who (Mindy Kaling), all of whom claim to be in touch with the Universe. More importantly, they say they know what happened to Mr. Murry, and they believe only his children will be capable of finding him. 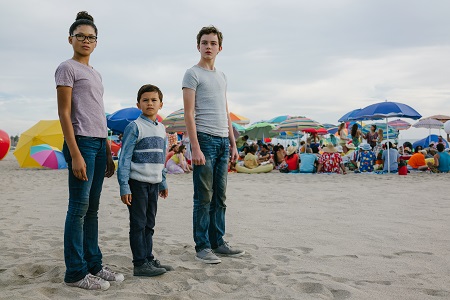 Joined by classmate Calvin O’Keefe (Levi Miller), Meg and Charles Wallace are whisked away on an interstellar adventure that takes them further away from home than any human beings have ever gone before. Along the way they will learn of the constant battle between Light and Darkness, Mrs. Which granting them a look at what can happen when the latter grabs hold of the human psyche and begins twisting it to its dangerously destructive designs. They are also introduced to the “It,” a being of pure evil that works just as hard for the Darkness as the three ladies do for the Light. It is with this “It” that Mr. Murry is currently being held, and it will be up to Meg to put the final pieces in their proper order if any of them have a chance of returning to Earth and making sure the balance between good and evil remains in alignment.

Along with Lloyd Alexander’s The Chronicles of Prydain adventures and Ursula K. Le Guin’s Earthsea books, Madeleine L’Engle’s A Wrinkle in Time quintet was unquestionably one of my absolute favorite series of novels I had the pleasure to read growing up. L’Engle’s efforts, in particular, shattered the way I looked at myself and the world at large. They gave me hope that the impossible could be realized, that the journey to discovery began with understanding who I was as a person and what it was I wanted most from life. While it would take me more years than I care to count to figure all of that stuff out, I honestly believe I would not be the writer, critic, coworker or friend I am today had these stories not been a part of my own personal adventure, L’Engle helping my imagination soar in ways it never had before I’d become acquainted with her writing.

But A Wrinkle in Time has never lent itself to being filmed. There have been a small handful of attempts, most notably a four-plus hour television miniseries broadcast in 2003. Yet none of them have managed to convey the mixture of magic, emotion, realism, fantasy and imagination L’Engle excelled at manufacturing. More, her story is so layered and complex, so filled with metaphorical meanderings born of psychology, science fiction and romantic longing, keeping track of the various ups, downs and mesmerizing in-betweens is something of a rapturous literary exploit in and of itself.

Taking the reins of a reported $100-million budget, Selma, The 13th and Middle of Nowhere director Ava DuVernay unquestionably tackles her most ambitious project yet. Working from a script by Jennifer Lee (Frozen) and Jeff Stockwell (Bridge to Terabithia), the filmmaker pulls out all the stops in her attempt to bring L’Engle’s timeless story to life. Most of the time she’s wondrously successful, at others coming up infuriatingly short, the movie ultimately a thoughtful, emotionally pure piece of fantastical entertainment that won me over to its side even if its more obnoxious missteps are undeniably difficult to overlook.

It is the human angle where DuVernay excels. Scenes of Meg being bullied at school, her inability to access her feelings whenever her father’s name enters into the conversation, the way the youngster lights up from within whenever she sees Charles Wallace do something incredible, all of it resonates in a manner that’s sublime. These scenes have the same kind of introspective, documentary-like edge the director brought to her previous endeavors, she and cinematographer Tobias Schliessler (Beauty and the Beast) utilizing a visual language that’s fairly atypical to productions similar to this one.

When things do explode into colorful fantasy, the resultant images the pair put on display in vibrant, widescreen glory are eye-popping in their authentic magnitude. Better, they do not overshadow the human journey Meg, Charles Wallace and Calvin are all on. In fact they augment it, precious little feeling showy or self-indulgent from a visual effects standpoint. If anything, DuVernay is more interested in the tactile and the lived-in than she is in the supernaturally expansive. Scenes of suburban cul-de-sacs overtaken with Stepford-like madness and crowded beaches overrun in gluttony and immoderation pack the biggest wallop, as do Mrs. Which’s visions of the “It” at full strength carnivorously turning friend into foe and joy into anger.

As much as I loved so much of this film, there are still pieces that held me at a distance. While Winfrey is nicely cast as the all-knowing Mrs. Which, unlike turns in pictures like Beloved or Lee Daniels’ The Butler, features that were made well after she’d become a global icon, here she can’t really disappear into the role. It does feel like she’s playing herself, and as such I felt myself being somewhat taken out of the story for the majority of her appearances. While the same can’t really be said of her two co-stars Witherspoon and Kaling, these characters are still fairly broad, undeniably cartoonish portraits of goodness, levity and joy that can come off as comical if viewed in the wrong light, making the taking of either of them seriously frustratingly difficult. 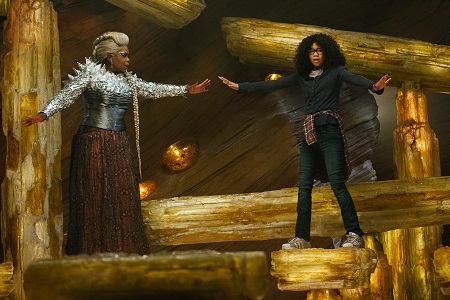 There is also something to be said about a movie that almost requires the viewer read the book that inspired it in order to fully understand all that is happening and why. While it is obvious DuVernay and her team treasure and adore L’Engle’s source material, that does not mean they are still able to transpose all of its delicate themes and ideas to the screen successfully. Even though significant changes have been made (don’t go looking for the twins; they’re nowhere to be found), most of them still don’t streamline things in a way that feels entirely manageable for those unfamiliar with the novel. It can be rough going as far as that is concerned, and while I never lost track what was going on and why I couldn’t help but still feel like not every viewer is going to be so lucky.

But DuVernay’s humanistic approach can often be spellbinding. The gentle mixing of the broadly cinematic with the starkly personal is exceedingly powerful, especially during the film’s magnificent conclusion. Meg’s choice to stay and fight for what she believes in and cherishes no matter what the cost a selfless testament to the sort of heights a person can aspire to when they fully set their mind to doing so. The level of understanding, the idea that anything is possible as long as love, compassion and sacrifice are on hand for the assist, that a person no matter what their race, gender or age can accomplish just about anything when labels are put aside as if they never existed, all of that is present here. A Wrinkle in Time might not be as magnificent as L’Engle’s novel (and I can’t say I expected it to be), but even so DuVernay’s adaptation is still a spellbinding family-friendly adventure worth venturing out to see. 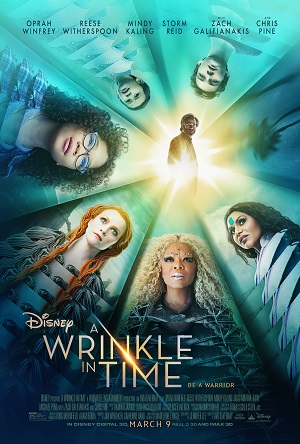