Former national security advisor Elizabeth “Libby” Lamm (Tika Sumpter) can’t forget the past. She’s haunted by her part in an aerial strike against a terrorist stronghold in the Middle East. Persuaded by then Vice President Rachel Burke (Jamie Lee Curtis) to falsify parts of a report that made this attack possible, believing that doing so will potentially end the war on terror for good, once the full ramifications of their actions are clear the growing disgust she feels begins to eat away at her soul. While initially playing the part of a good soldier, doing what she can to help convince the American public of the legality of the administration’s actions, since then Libby has secretly written a memoir chronicling every aspect of the plan to conduct that air strike. It is a report Rachel Burke, now President of the United States, understandably does not want to become public.

Martin Salhi (Ben Tavassoli) is a promising graduate student at a prestigious New England university of Middle Eastern descent. What Libby Lamm is hired to teach one of his classes the young man is noticeably shaken. He begins to stalk his new professor, surreptitiously chronicling every step she makes. Martin has his own reasons for wanting Libby held responsible for her part in the American military’s air strike against his homeland. He’s also noticeably curious as to her recent actions that he’s been clandestinely observing, putting his original plan to hold her personally accountable for what he views as nothing short of the mass slaughter of innocent civilians on pause until he learns what is going on with the former government official and why she’s being so strangely secretive.

That’s the overly complex setup to what’s happening in writer/director Joe Chappelle’s (Phantoms) political thriller An Acceptable Loss, a well-intentioned ticking clock suspense yarn where tension is hard to come by and anything approaching an emotional investment in the outcome is practically nonexistent. Additionally, the subplot involving Martin isn’t believable, his character arc inexplicably transforming into something out of 3 Days of the Condor or The Parallax View in a manner that is forcibly nonsensical. His involvement with Libby is absurd, and as the entire last third of the story hinges entirely on the decisions he makes and very little else this is a gigantic problem the film cannot hope to recover from.

Not that the central scenario isn’t interesting. Libby’s crisis of conscience isn’t half as compelling as her back and forth discussions with Rachel also prove to be. While not exactly subtle, they have a strength and a resonance that’s fascinating. While one does hope the answer to this moralistic argument is obvious, that the viewer would never choose to unleash the level of unimaginable carnage these characters do and then face having to live with the repercussions of their actions, it’s unnerving how matter-of-factly Chappelle treats this debate. Thanks almost entirely to Curtis’ chilling, confidently high-minded performance, Rachel’s reasoning for changing U.S. policy in regards to first strike attacks and the need for collateral damage, no matter how massive it might be, have a bone-rattling immediacy that reminded me of statements made by a number of politicians roaming the halls of Congress and residing within the White House right this very second.

It’s fairly clear what Chappelle is trying to do. He’s placing a mirror to the current political miasma and asking the viewer to question everything they think they hold dear. The filmmaker does so by taking this story to its abhorrent extremes, showing in no uncertain terms what could happen when a Presidential administration is allowed to go unchecked by the rule of law and given free rein by a Congress disinterested in conducting their oversight responsibilities. Rachel is like an amalgam of Dick Cheney, Donald Trump and Martin Sheen’s authoritarian political candidate with a backbone made out of string cheese that the actor portrayed in David Cronenberg’s The Dead Zone, Curtis playing her character with such determined gravitas I found I couldn’t take my eyes off of her.

But so what? The thriller aspects do not work, especially once Libby and Martin stop working at cross-purposes. The entire will-it-or-won’t-it get published aspect surrounding the former’s memoir isn’t interesting. Worse, it also isn’t suspenseful. Nothing feels real or authentic, and there was never a second I believed what was transpiring could take place in anything even passingly resembling the real world. The last act is especially bothersome, things building to an expected conclusion that’s nowhere near as shocking as is undeniably the intent.

Sumpter was magnificent in 2016’s Southside with You, the actress a rising star I expect great things from in the future. While she does what she can here, Libby is such a mess of a character it’s remarkable the actress makes her anywhere near as compelling as she does. But Chappelle’s writing for this smart, determined woman is all over the map, and there were many moments where her decisions made so little sense, especially as they pertained to Martin, that I might have rolled my eyes in irritated frustration on more than one occasion. Sumpter can only do so much to mitigate all of this psychologically discombobulated madness, and that Libby isn’t a total disaster as the protagonist has more to do with her talent and resolve than it does anything relating to the director’s script.

I almost feel bad for disliking An Acceptable Loss as I do. Chappelle has something to say, and I don’t think there’s any minimizing he has a point in regards just how bad it might be to put unscrupulous, race-bating fundamentalists in charge of whether or not to utilize the nuclear button. But the sermonizing is as plodding and as tiresome as the inept plotting of the suspense-thriller aspects of this tale unfortunately prove to be. For all of the film’s high-minded aspirations it’s just too silly and stupid to be able to live up to any of them, Chappelle’s drama an explosive misfire that’s nothing short of a complete waste of time. 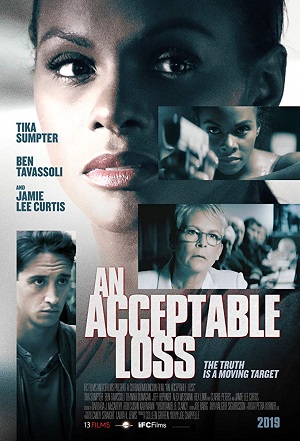