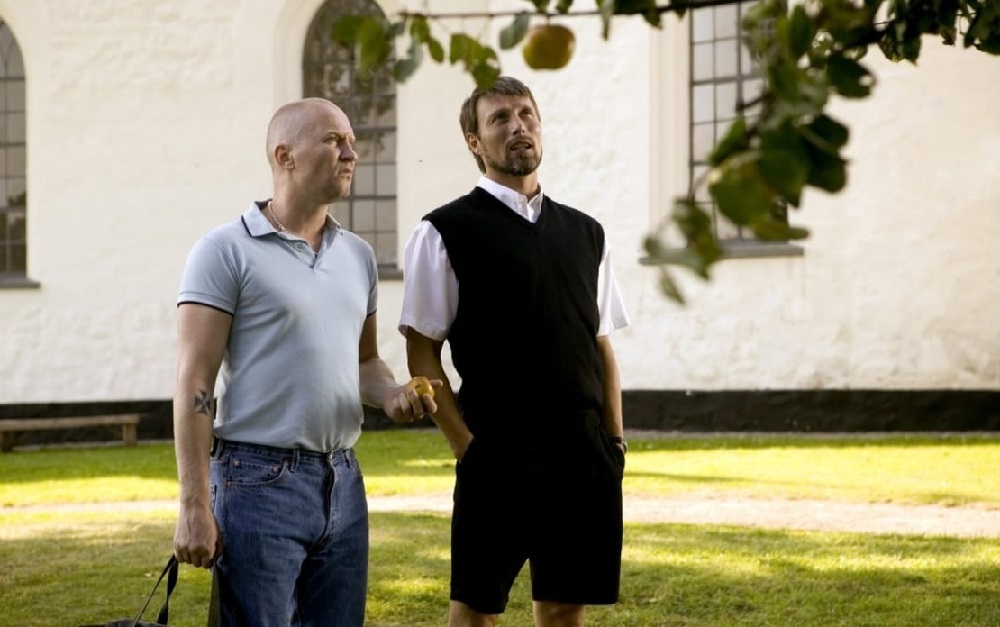 Anders Thomas Jensen’s Adam’s Apples was one of the best films I saw during the 2006 Seattle International Film Festival. This dark comedy from Denmark tickled my funny bone while it shocked me senseless, ultimately bringing me to tears as it made me spit out my popcorn in astonishment. I loved this movie, and to see it finally getting a limited theatrical release can’t help but make me smile.

Sentenced to community service at a small, countryside church, much to his astonishment Adam (Ulrich Thomsen) finds himself warmly received by the pleasantly beaming vicar Ivan (Mads Mikkelsen). A middle-aged neo-Nazi with a brutal past, the criminal sees himself as being beyond redemption, trying to fit amongst the religious leader and his motley flock of parishioners not high on his list of personal goals.

Ivan disagrees. He urges Adam to choose a goal to occupy his time, a task that will make him feel better about himself and his place in the world. Sarcastically the con states he’d be happy to bake an apple pie, not ever imagining the priest will suddenly put him charge of caring for the parish’s lone apple tree. Almost immediately this tree is under assault, crows, maggots and lightning all waging war upon it. This quickly becomes an ironically irreverent battle between good and evil with Adam wondering what the heck is going on.

Jensen’s film is fearless. Much like Borat, this one brazenly pushes buttons and shatters taboos other supposed dark comedies tend to avoid like the plague. The humor in Adam’s Apples is as black as coal, all the bad things the world has to offer (including getting shot in the head) hurtling themselves at one lonely soul who only wishes to do good.

This is what makes the picture so priceless. Through this battle, this eternal fight between saint and sinner which includes the commonalities which makes them inseparable, Jensen is able to illuminate the wonders religion, when taken at its most heartfelt and pure, can offer those willing to hold to embrace it in a pure, altruistic manner.

This does not mean the film is an extremely conservative Right versus Left diatribe. Quite the opposite. The religion the filmmakers offer for examination is a more universal one where all are welcome and the ability to ask for forgiveness, and to say you’re sorry, is more important than trying to follow a limited piece of obscure scripture down to the letter. This is as open-minded and as enlightened a faith-driven comedy as any I’ve ever seen, and seconds after holding my mouth agape in shocked hilarity I found I was wiping away quiet tears of emotionally-driven rapture.

Both of the leads are fantastic. All of the histrionics and silliness are played completely straight, both Thomsen and Mikkelsen treating all this insanity like it’s the most normal and everyday thing in the world. Jensen’s script is gold, every bit as good, if not better, than the ones he has written (or co-written) for fellow Danish filmmaker Susanne Bier (Open Hearts, Brothers, After the Wedding), and how this picture didn’t rate a 2005 nomination for Best Foreign Film (it was submitted by Denmark for consideration) is light years beyond me.

Listen, I’m not going to kid anyone. This movie is uncompromising, ruthless and won’t be every viewer’s idea of a great time. As much as I loved the political incorrectness of much of what was happening there were still a couple of moments where even I couldn’t help but wonder if Jensen had gone a step or two a bit too far. I also can’t say the climax is completely satisfying, and although the look on Thomsen’s face is worth a giant chuckle part of me still wished the director had taken things in a direction not quite so obvious.

Yet this comedy is still something else. I adored it, enjoyed it so much after its first Seattle International Film Festival screening came to an end I immediately called up the publicist and begged for a ticket to see it again when it played for a second time. Heck, when it opens back up here in Seattle for a regular theatrical run I’ll even purchase a ticket and go see it for a third time, Adam’s Apples a Dutch treat that’s a gift from cinematic heaven. 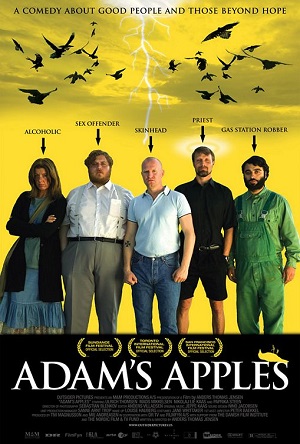