Somehow 2019’s animated The Addams Family was a sizeable enough of a success to warrant a sequel. This shocks me. As magnificent as the vocal cast might have been – Oscar Isaac as Gomez, Charlize Theron as Morticia, Chloë Grace Moretz as Wednesday, Finn Wolfhard as Pugsley, Nick Kroll as Uncle Fester, Bette Midler as Grandma – I still found it impossibly difficult to find any semblance of Charles Addams’ iconic characters hidden within that family-friendly monstrosity.

Nevertheless, directors Greg Tiernan and Conrad Vernon (who also once again voices devoted butler Lurch) are back with The Addams Family 2. This time with a script from Pokémon Detective Pikachu scribes Dan Hernandez and Benji Samit (with a credited assist from three additional writers), I can’t say this latest adventure for the Addams clan is a vast improvement over their first one. I might even go so far as to say it’s worse.

This time around, Gomez decides to take the family on a summer road trip vacation. He’s worried Wednesday is becoming too distant and is intent on growing up much too fast. To solve this problem, Gomez asks Grandma to keep an eye on the house while he packs everyone into a camper and hits the road for California. They’ll travel to Death Valley, hitting all of the notable hotspots between the Atlantic and Pacific along the way.

There’s an additional complication concerning a determined lawyer (Wallace Shawn) claiming he needs to run a DNA test on Wednesday to prove she’s actually an Addams, while an excitable tech billionaire (Bill Hader) would love to get a hand on one of the young girl’s most recent scientific breakthroughs. Along the way they also catch up with Cousin It (Snoop Dogg) and crash a Texas tween beauty pageant amongst other misadventures, everything building to a California surprise that none of them saw coming.

Javon ‘Wanna’ Walton takes over voicing Pugsley from Wolfhard. Otherwise, the entire cast from the first film returns. They’re in relatively fine form, and while neither actor could likely replace either Raul Julia or Anjelica Huston from the 1990s live-action films or John Astin or Carolyn Jones from the 1960s television series, if the writing were just a wee bit sharper I’m certain Isaac and Theron would be terrific as Gomez and Morticia. Once again it is Moretz who steals the show, however, and it was smart of the filmmakers to center the sequel on Wednesday.

As far as positives are concerned, I think that may be all I have to say. I guess the animation is fine, and at barely 90 minutes the sequel hardly overstays its welcome. There are a handful of comedic sequences I’m certain younger viewers will giggle over (that beauty pageant set piece for certain), and there’s one moment with Wednesday at the beach that admittedly even got me to utter a momentary chuckle.

But that’s as far as I can go. I don’t feel like either of these animated efforts understands these characters or grasps what makes them tick. While it pains me to say it, I kind of think every entry in Adam Sandler’s popular Hotel Transylvania series does a better job capturing the spirit of Charles Addams than these two disagreeably forgettable misfires do. I did not like The Addams Family 2. I did not like it at all. And that’s all I have to say on the matter. 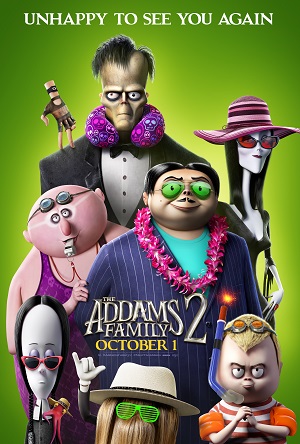