As popular things go, I can’t really say the Pokémon phenomenon has ever been a thing I’ve attempted to embrace. My little brother loved Pokémon, however, so I certainly got my fill of these strange little creatures who were doing battle in a variety of competitions. I also discovered I could do the Pikachu voice, a bumblebee-colored furry Pokémon with an adorable smile and a normally pleasant demeanor that could channel electricity during battles, pretty much perfectly. I could walk around the house and squeak out in a high-pitched squeal, “Pika pika!” or “Pika pi!” and seconds later I’d hear a goofy giggle coming out of the mouth of a happy five-year-old, the look of delight on his face making my doing this worthwhile.

But that’s really as far as my affinity for Pokémon ever went. I didn’t care for the animated television series. I never played any of the video games. I didn’t know anything else about its Japanese anime and comic book origins other than it seemed expressly designed to annoy me. All of which means I can’t say the idea of Pokémon Detective Pikachu spoke to me or that I was clamoring to give the film a look, itself based on one of many video game offshoots the franchise has generated over the past two-plus decades or so. As handsome a production as the trailers made this comedic mystery look I knew I wasn’t going to be the target audience, something I feel I should admit upfront before continuing with this review.

While my initial trepidations in regards to Rob Letterman’s (Goosebumps, Monsters vs. Aliens) latest proved to be somewhat unfounded, it still wasn’t like Pokémon Detective Pikachu won me over entirely. While it’s breezily paced, magnificently animated (the visual effects showcasing a world where human and Pokémon exist side-by-side or nothing short of sensational) and gorgeously shot by two-time Academy Award-nominee John Mathieson (Gladiator, Logan), the movie still got on my nerves on a number of occasions. Seemingly composed in committee (between the story and the script there are five credited writers), the narrative is a massive hodgepodge of hard-boiled gumshoe mystery clichés only told with a kid-friendly (and Pokémon-centric) flair for the absurd. It also doesn’t know what to do with any of its supporting characters, and it is almost as if every actor appearing in this is seemingly in a different motion picture than their fellow performer standing there next to them is in.

The exception to this is the fine work turned in by both Justice Smith as the film’s human lead and by a game Ryan Reynolds voicing the titular character. They are fully invested in the proceedings, injecting warmth, heart and emotion into the narrative, all of which likely wouldn’t have been there otherwise. They are a strong pairing, and even if Reynolds is doing a more family-friendly variation on his Deadpool schtick there is still an underlying warmth to his performance that couples nicely with Smith’s emotionally fragile intensity. They are the heart and soul of the film, this odd, crazy little mystery remaining easy to watch even when the script refuses to make a lick of sense or during those moments where Letterman overloads the screen with action beats that are noisily chaotic.

As for the plot, for as nonsensical as all this ridiculousness becomes it’s honestly fairly straightforward and easy to follow. After learning his father, a vaunted Ryme City detective, has been killed in the line of duty, morose insurance agent Tim Goodman (Smith) returns home to face his personal demons. The pair were estranged after the tragic death of his mother when he was only 11-years-old, the young man choosing to live in the country with his grandmother instead of having to share the same house with his dead. Even so, once back in the Pokémon-friendly Ryme City Tim’s surprised to discover just how badly his father wanted to reconcile with him, his sadness that they will never get the chance to do so substantial.

Enter Pikachu (Reynolds). He was Detective Goodman’s partner and while everyone else only hears that standard variety of pika-pikas coming out of the creature’s mouth, for some odd reason Tim can understand every single word the furry black and yellow electrically-charged Pokémon says. Pikachu is certain the detective is still alive as he was there when their car was blown off the road by an unknown assailant. Problem is, he also has amnesia, so he’s flying blind as he tries to put together the puzzle pieces of this mystery and learn who it was that tried to rub both of them out. Pikachu convinces Tim to join the investigation with him, two becoming supportive friends as they go on a journey that will reveal a level of devious doings at the heart of Ryme City that could shake this safe haven for human-Pokémon relations down to its very foundations.

The movie basically heads into Raymond Chandler meets Isaac Asimov territory from there, Pikachu and Tim joining forces with an energetic television news intern, Lucy Stevens (Kathryn Newton), while also getting support from billionaire philanthropist Howard Clifford (Bill Nighy) as they attempt to figure out what happened to Detective Goodman. But Lucy is too irritating for her own good, Newton trying to channel her inner His Girl Friday-era Rosalind Russell and, while her efforts to do so are appreciated, they’re unfortunately equally annoying. As for Nighy, he’s fine but not really anything more than that, and as his character is pivotal to the eventual outcome of the story the fact Clifford becomes oddly forgettable is an enormous problem.

Pokémon Detective Pikachu works best when it focusses exclusively on Tim and Pikachu as well as when it revels in the absurdist sights and sounds of this zany little world. When it breaks things down to basics and just shows the pair following clues and interviewing suspects it can be a lot of fun. But when the earth begins to shake and villains finally show their true colors things get far less interesting. It becomes a cacophonous smorgasbord of sound and fury that’s frankly tiresome, and while the younger members of the audience (as well as die-hard Pokémon fanatics) won’t likely care about any of that, for my part I still can’t say I understand what all the fuss is about.

But I can still do the Pikachu voice and it still makes me brother giggle when I do it. Make of that what you will. 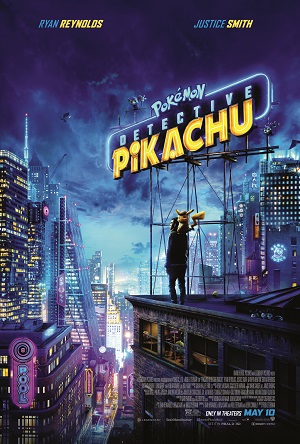