The world is not as it was. It is 2029, and ageless mutant Logan (Hugh Jackman), known for decades as The Wolverine, the most lethal and indestructible of the X-Men, has finally seen the countless decades of violence leave their mark upon his flesh. Aided by empathetic albino outcast Caliban (Stephen Merchant), he cares for an aged Professor Charles Xavier (Patrick Stewart) in a secluded hideout on the Texas-Mexico border. Dreaming of sailing away from this broken-down world, hopefully leaving pain and loss behind, Logan is in all actuality waiting for death, realizing in no uncertain terms his time on this planet might finally be coming to an end.

Charles isn’t so sure. While his mental powers are not what they used to be, bordering on being disastrously out of control if he’s not properly medicated, when the curiously primal child Laura (Dafne Keen) comes into their midst he knows instantly Logan is the one to help her. With Caliban missing and lethal mercenary Pierce (Boyd Holbrook) tracking their every step, the trio take off cross-country for North Dakota, a fabled oasis for young mutants supposedly hidden amongst the rock and sand of the desert. Along the way, Logan finds a reason to go on, if not living, at least to continue the fight, the secrets of Laura’s birth, along with that of those like her, worth protecting.

And so begins Logan, Jackman’s ninth and supposedly final outing as the Marvel mutant Wolverine, and of the three adventures featuring him and only him (X-Men Origins: Wolverine, The Wolverine and now this), this one is unquestionably the best. More, it might just be the best X-Men film that’s been produced so far, and while I’d happily debate the merits of this feature versus that of 2003’s X-Men 2 any day of the week, amongst fans of the series the fact both films can be mentioned in the same breath is certainly cause for celebration.

Better, non-comic book moviegoers can also feel the same. The actor, reuniting with director James Mangold, has crafted an astonishing, bleakly intense, brutally sincere epic that’s more darkly tragic Western than it is your average superhero spectacle. Character-driven, shockingly violent, building to a finale that purposefully echoes old school classics as varied as Shane, The Wild Bunch and The Man from Laramie, this movie packs an astonishingly gigantic emotional wallop. It is as thought-provoking as it is exciting, going in directions few, if any, major studio comic book superhero production ever has before.

Right from the start it’s apparent this isn’t your average X-Men opus. If Deadpool showed you could make an R-rated, Hollywood-produced superhero flick people would flock to, for all the violence, sexual innuendo and four-letter words there was still a lightness of touch that kept things audience friendly as far at that 2016 hit was concerned. Mangold, working closely with Jackman and his fellow screenwriters Scott Frank (The Lookout, Out of Sight) and Michael Green (Green Lantern), isn’t interested in doing the same. He’s okay with pushing boundaries, showcasing violence for what it is, making the bloodletting feel real, potent and morally compromising. There are no easy outs, no silver linings, and while an air of hope permeates the crucible of carnage and chaos that makes up the climax, getting there is an uncomfortable compendium of emotional nuances that are rich in complexity and heartrending in execution.

Mangold is channeling instincts that helped make his remake of 3:10 to Yuma, his Johnny Cash biopic Walk the Line and his police corruption thriller Cop Land so successful, and in the process manages to craft something special. By staying true to his characters, by not going the typical comic book route of showcasing these super beings battling some sort of calamity where the fate of the entire planet is in the balance, he and his team ground things in an authentic realism that’s bracing, making every spurt of blood, every severed arm and every claw through the cranium resound like a punch to the gut or a hand clasping the throat in its iron grip.

Not that the filmmakers don’t flaunt their adult rating more than necessary on occasion. There are times where Xavier starts dropping F-bombs not so much because they fuel the story or help the character but more because Mangold and his crew have the freedom to insert them without studio executives telling them not to. The opening sequence is also unbelievably gruesome, almost to a point of face-splitting excess, and while this makes for a solid intro to the vibe and the spirit the film is aiming for, it’s still noticeably over-the-top.

Yet Logan works. It’s a marvelously fascinating drama, the three generations of characters at the center all interacting with one another in a believably organic way. Stewart gives his best performance ever as Professor X, a moment where he realizes the devastation he’s sadly responsible for because of his inability to control his mental powers like he once did having me reaching for tissues patting away a handful of genuinely earned tears. Newcomer Keen is also terrific. Relatively silent for the majority of the film, when she does speak up her words matter, each syllable leaving a mark no amount of violence or bloodletting ever could. As for Holbrook, he’s an excellent foil for the group, his craven southern charm concealing a streak of heartlessly single-minded intent that oozes menace.

But, as it was from the first X-Men film where he stole the screen from the likes of Stewart, Ian McKellen, Famke Janssen and Halle Berry (but not so much Anna Paquin), this is Jackman’s show, his command of the character as strong and as self-assured as it has ever been. He gets to mine richer terrain here, territory hinted at briefly in The Wolverine until things devolved into another battle between a superhero and a bad guy in a giant robotic suit, and as such appears to be invigorated by the challenge. 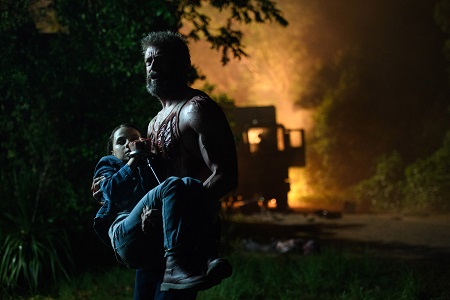 This time out, Logan’s weariness, his desire to see his battle come to an end, all of that Jackman is easily able to convey. More, he also taps into the character’s heart, his very soul, showcasing the stirrings of a man who has seen the heart of darkness for what it is yet still decided to head back into the battle even knowing the cost. His transformation back into the warrior who became the stuff of legends and comic book tales that inspired countless generations, including mutant children like Laura, feels earned, cathartically genuine, allowing Jackman to tap into emotions rarely put on the screen in motion pictures fitting into this particular genre.

There’s a lot I’m not going to talk about, plot twists and character beats that are better left discovered without my hinting at them. Just know that Mangold doesn’t give every character the ending you’d like them to have, staying true to the story’s temperament and personality no matter what effect that might end up having on members of the audience used to being coddled by the superhero status quo. Make no mistake, Logan is a Western, a modern one set in the near future, to be certain, but a melancholic, old school Sam Peckinpah meets George Stevens meets Anthony Mann meets Monte Hellman Western all the same. This isn’t just a great comic book movie, isn’t just a superb X-Men adventure, it’s a fantastic motion picture, period, and Mangold, Jackman and everyone else involved with its creation should be more than proud of what it is they’ve accomplished. 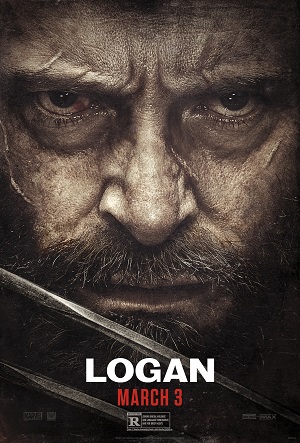