After a personal family tragedy leaves them grieving, teenager Zach Cooper (Dylan Minnette) and his High School Vice-Principal mother Gale (Amy Ryan) move from New York City to a small New England town to start a new life. Much to the consternation of her reclusive and secretive father (Jack Black), neighbor Hannah (Odeya Rush) takes an immediate liking to this new boy living next door, striking up a friendship moments after he arrives. 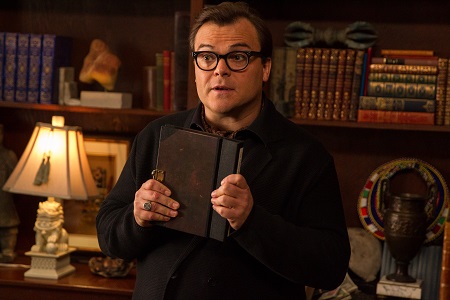 Thing is, she’s home-schooled, so seeing her away from her overprotective dad is pretty much impossible. After overhearing an argument, Zach fears she might be in danger, breaking into Hannah’s house to see if she’s all right. Assisted by new acquaintance Champ (Ryan Lee), the town newcomer quickly learns nothing as it seems, discovering the girl’s father isn’t just reclusive “Goosebumps” author R.L. Stine, but also that his novels are far more realistic – and dangerous – than he ever couple have imagined even in his wildest nightmares.

Drawing inspiration from the likes of Gremlins, Jumanji, Wes Craven’s New Nightmare and Rod Serling’s “The Twilight Zone,” Goosebumps takes R.L. Stine’s fantastically popular scary stories for kids and transforms them into one of the more imaginatively meta fantasy-adventures to hit screens in quite some time. Working from a story dreamt up by Ed Wood and The People vs. Larry Flint scribes Scott Alexander and Larry Karaszewski, the first half of Darren Lemke’s (Turbo) screenplay is a wondrous delight, filled with a number of terrific ideas and moments. Director Rob Letterman (Gulliver’s Travels) keeps the pace fast and his touch light, moving things briskly as he channels his inner Joe Dante attempting to craft a scary story to be seen in the dark fit for viewers ages 8 to 80.

But, much like Joe Johnston’s 1995 hit Jumanji that involved a board game come to perilous life, at a certain point the film loses touch with the characters and their collective plight, caring only about the spectacle and the chaos and sadly little of anything else. Instead of building dimensions, Zach, R.L., Hannah and Champ become increasingly less interesting as things progress, becoming little more than cardboard cutouts fit more for a Disney Channel special than a full-fledged effects-filled theatrical enterprise. Worse, the adult characters, most notably Gale, are portrayed as unhelpful idiots who have no right to be parents, their collective stupidity so cavalierly rendered it’s almost offensive. The whole last act is a steamroller of visual razzle-dazzle and nothing else, the central problem facing the central quartet of unlikely heroes deserving a far better solution than the groaner of a one delivered here. 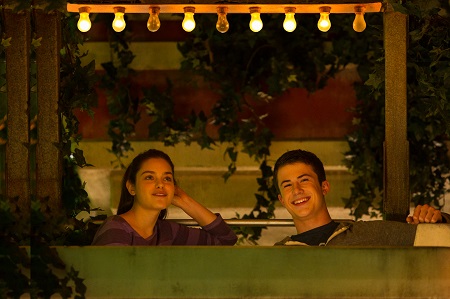 And what is the problem? It seems Stine’s monstrous creations don’t like being trapped inside his manuscripts, most notably “Night of the Living Dummy” villain Slappy (voiced by Black), so when Zach and Hannah accidentally free him he’s more than happy to unleash all of the author’s supernatural horde upon the unsuspecting town. The sleepy New England enclave suddenly finds itself cut off from the rest of the world and under siege from the nightmarish stars of books as varied as “Attack of the Graveyard Ghouls,” “The Scarecrow Walks at Midnight,” “Werewolf of Fever Swamp” and “The Blob That Ate Everyone.” Best of all are the diminutive, lethally murderous gnomes from “Revenge of the Gnomes,” their assault on Stine’s kitchen one of the best of its kind since Dante set Stripe and his green-skinned compatriots lose against Lynn Peltzer and her heroic son Billy in 1984’s Gremlins.

But the movie never lives up to its set pieces, and the last half hour is particularly insufferable. Third act twists land with a blandly mundane thud, and the visual freneticism is too nonsensical for its own good. Black is in fine form, and none of the younger actors do anything to embarrass themselves, but overall I could have cared less about anything that ended up happening. While fans of the books, as well as younger viewers with a taste for the macabre, might disagree, for my part Goosebumps left me cold, the only rising fear I felt while watching it the sneaky suspicion decent box office might inspire the filmmakers to someday go through the process of creating a sequel. 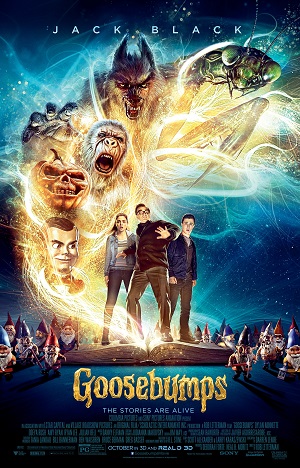