Tedious After Earth an Egocentric Calamity

It has been a thousand years since humanity was forced to flee Earth, heading into the stars to start a new civilization on Nova Prime after our home world finally become uninhabitable. On a secret mission, carrying a lethal cargo, the ship carrying revered General Cypher Raige (Will Smith) and his teenage son Kitai (Jaden Smith) has crash-landed on the planet, killing all aboard save for them. With supplies low, facing an ecosystem that has evolved without human interference and his father gravely injured it is up to Kitai to set out on a mission to find a missing mayday beacon that could potentially insure their survival, an escaped alien creature on his tail every step of the way. 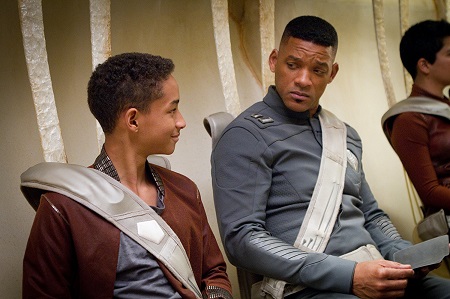 After Earth is a bad movie. No. Let me rephrase that. After Earth is downright terrible, with a story conceived by the elder Smith and script by director M. Night Shyamalan and fellow screenwriter Gary Whita (The Book of Eli) that’s as nondescript and undeveloped as it is ill-conceived and frustratingly idiotic. What should have been your basic survival tale instead becomes a laughable excuse in indefensible tedium, everything playing out like a second-tier video game instead of the character-driven spectacle I’m guessing the filmmakers were hoping for.

Shyamalan has taken a lot of heat of late, a lot of it arguably warranted. All the same, I’d make the case films like The Last Airbender, The Happening and Lady in the Water all have their merits (especially the latter, which I actually like). At the very least, they all bear the touch of an engaged director, made with style, energy and passion even if the stories they’re weaving don’t ultimately come together in entirely satisfying fashion. There’s something going on beneath the surface in each of these perceived failures, and as such having discussions and debates about them is far more worthwhile than many who casually dismiss each film out of hand would like you to believe.

Here, however, Shyamalan is obviously a director for hire, and I quickly got the feeling he had little to no wish to be sitting behind the camera trying to bring any of this silliness to life. While the movie is as visually resplendent as anything in the director’s canon, veteran cinematographer Peter Suschitzky’s (Cosmopolis) visual compositions are sensational, there is still no heart beating within the narrative itself. These aren’t characters, they’re constructs, engineered to illicit specific emotional responses compiled of clichés pilfered from similar stories, both literary and cinematic, and as such Shyamalan hardly seems to care about them.

But why should he? Better, why should the viewer? Cypher is an emotionless vacuum and Kitai is your typical bratty know-it-all teen, neither of them seeming to have the slightest interest in meeting the other halfway even though their mutual survival depends on the pair doing just that. The journey itself is a joke, the youngster running between point to point looking for mysterious “hot spots” almost as if he were being shuffled through the screen via a PlayStation controller. Along the way he encounters a squad of belligerent monkeys, a giant bird and a pack of carnivorous felines, all of them depicted with a simplistic banality stripped of tension and lacking in suspense.

The central conceit, the idea that Kitai is also being stalked by an alien creature genetically engineered to see his fear and track him based on that alone meaning he has to strip himself of that emotion entirely so he can pass as invisible within its presence, ends up being a wholly laughable. While Cypher drones on about this and that and his son stews about his inability to control his own emotions during a calamitous childhood tragedy I rolled my eyes at the insane ham-fisted futility of it all. It all builds to the expected climax with no surprises whatsoever to be found, the movie transforming itself from Call of the Wild to The Matrix with an inevitability that’s tediously stupefying. 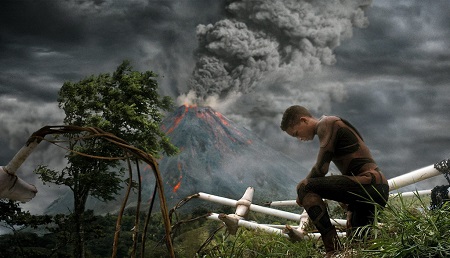 There’s more. If we’ve invented interstellar travel, if we’re smart enough to settle on new planets on the other side of the galaxy, why do we fight our most lethal adversary with nothing more than a Swiss Army Knife-like spear? Also, if we’re so technologically advanced, why does the survival beacon only transmit from the top of a mountain as if it were a cell phone searching for a signal? Why does Kitai’s so-called “survival suit” not actually, you know, help him survive? The list goes on and on, all of it becoming so overwhelming at a certain point I threw my arms up in disgust, giving up on the picture altogether.

It almost feels like that After Earth is nothing more than a massive ego trip on the part of Will Smith, a film completely and entirely designed to make a superstar out of his son Jaden. Thing is, neither actor is any good in this, the younger Smith particularly terrible, having some sort of weird robotic monotone accent thrust upon him he is clearly uncomfortable speaking with. Without a doubt, this big budget high-concept science fiction spectacle is Summer 2013’s first unmitigated disaster, and seeing how anyone involved creatively could walk away from this calamity unscathed is way beyond me. 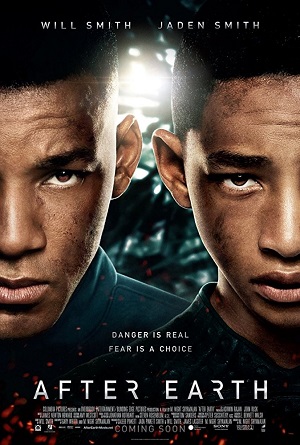