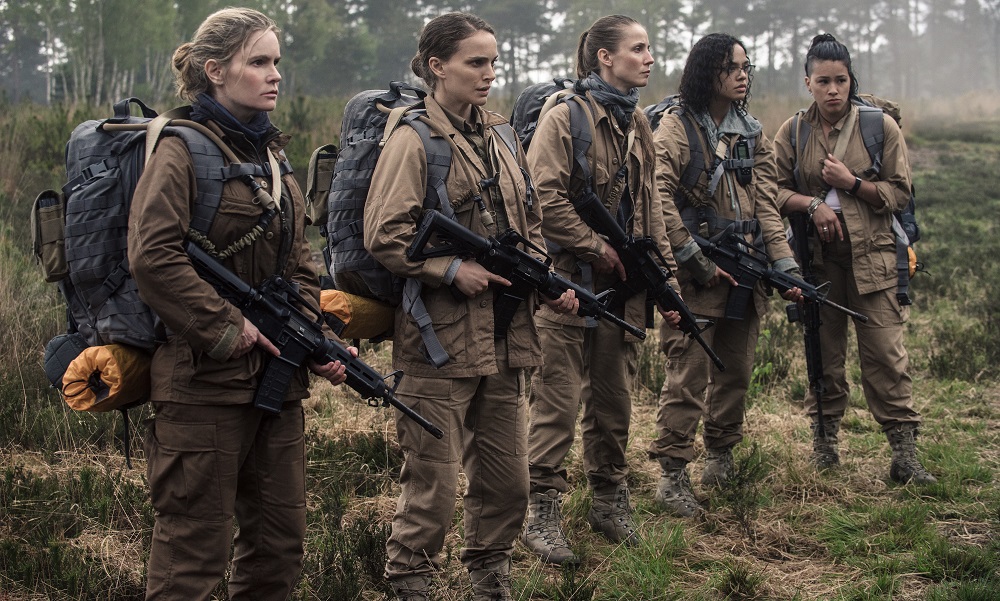 On the eastern coastline of the United States, a giant swath of land known as “Area X” is guarded by the U.S. military and a studied by a dedicated team of scientists. A growing anomaly, referred to as the “Shimmer,” has slowly been growing in size, doing something to the landscape and to all forms of life residing there as it consumes more and more territory. For the past three years, every group of soldiers and scientists that have gone into the Shimmer have not returned, all of them presumed dead until information proving otherwise is found.

An Area X psychologist and the woman tasked with selecting all potential candidates to enter the Shimmer, after sending so many to what she can only assume was their doom Dr. Ventress (Jennifer Jason Leigh) decides to lead the latest expedition herself. This time, she’s assembled an all-female team, Anya Thorensen (Gina Rodriguez), Cass Sheppard (Tuva Novotny) and Josie Radek (Tessa Thompson) all volunteering for a variety of cryptic reasons, all of them personal. They are joined at the last minute by esteemed biologist and retired soldier Lena (Natalie Portman), her reasons for heading into the Shimmer ones she’d rather no one other than Dr. Ventress knows about.

I haven’t read any of the books in author Jeff VanderMeer’s award-winning “Southern Reach Trilogy,” of which Annihilation is the first installment, but from what I understand writer/director Alex Garland (Ex Machina) has reworked the material considerably as far as the script for his feature adaptation is concerned. However faithful this movie might or might not be, what can be said is that this is pure science fiction and is as thought-provoking, intellectually challenging and as spiritually fascinating as anything that’s hit theatres this side of 2014’s Under the Skin or 2012’s Cloud Atlas. It is a mystifying, continually absorbing trek into the cryptically unknown, the ideas being discussed and discovered putting the human experience as a whole under a powerful microscope where the image being dissected isn’t always an appealing or satisfying one.

Much like Ex Machina, Garland’s second directorial outing is undeniably cold and cerebral. Yet that doesn’t mean the filmmaker isn’t interested in the finer points of the human condition. There is a mournful emotionalism that powers things forward to their conclusion, an intensely visceral aching for something more out of life that appears to be driving each of these women onward. The pain and disappointment each has dealt with in their respective pasts affects their personal judgment in a variety of ways. Some let their curiosity increase in intensity. Some allow fear to take root and fester. Some need answers, a hunger to get some form of understanding as to why so many were apparently sent to their untimely doom investigating the Shimmer.

These are just some of the emotional elements that lay at the heart of Annihilation. Garland attempts to sweep them together into one somber mélange, and more often than not he is successful. Watching these women attempt to navigate an uncertain psychological minefield that sits right alongside an ever-shifting practical environment where nature appears to be bending in on itself and all sorts of mutations violently hunger to feast on their flesh is pretty extraordinary. Each idea and concept the director presents proceeds to bounce off those around them in a multitude of ways, the literal and the figurative joined at the hip in such a manner making heads or tails out of every presented piece is likely impossible on initial viewing.

But Garland doesn’t expand on and flesh out every character as cleanly or as succinctly as much as I would have liked. Thompson’s Josie randomly spurts out some of the film’s most essential and thought-provoking pieces of information, her brilliance never in doubt as she observantly studies the Shimmer and its seemingly inexplicable mysteries. At the same time, I never had a sense I knew who this woman was, her calm grace in the face of tragedy and terror, not to mention fear for her own survival after mutated creatures begin to hunt them, never feeling quite right to me. The choice she ends up making near the end, while enigmatic and ethereal in a manner that caught me slightly by surprise and brought a quiet tear or two to my eyes, still rang slightly hollow as far as I was concerned, and I’m not altogether certain I entirely grasp what Garland wanted me to take away from the moment.

There is also the issue of Oscar Isaac. Portraying the only soldier to return from the Shimmer, I can’t say I was particularly shocked or surprised by anything that ended up being revealed about the character. While his ties to Lena are exposed in the film’s first few minutes, how he survived and the ordeals he experienced while out on his mission are hardly revelatory. I knew almost immediately what the twist was going to be and was honestly a little taken aback by just how straightforward and obvious this particular plot point turned out to be. 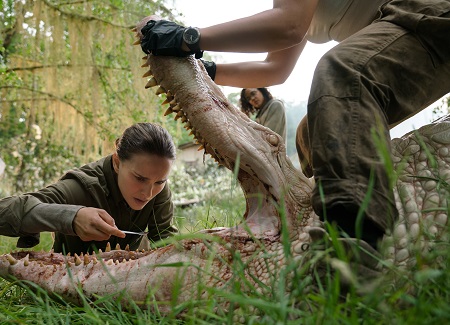 None of which lessens the power Garland’s sophomore outing has to enthrall. Featuring a colorfully ingenious landscape right out of Princess Mononoke or Howl’s Moving Castle, Mark Digby’s (Dredd, Never Let Me Go) exquisite production design is like a surrealistic Hayao Miyazaki-inspired animated wonderland come to vibrant practical life. There’s always something to look at and obsess over, each flower, crystal tower and flesh-covered mutation a gloriously intriguing enigma worthy of discovering an answer to. This is a world one wants to crawl inside and live in for hours, maybe even days, at a time, the dangers of doing so almost secondary to the naturalistic discoveries and environmental truths that could potentially be revealed.

I’m not sure how much I liked Annihilation. I’m still sitting here dissecting its pieces, mulling over its ins and outs in ways that aren’t always entirely satisfying. But I’m also blown away by the ambition and the imagination of Garland’s latest, consumed by the myriad of ideas and emotions it revels in with such pointedly, scientifically exacting precision. Allowing Portman the freedom to deliver a performance that shifts and evolves like the landscape she is investigating, this is a piece of science fiction cinematic wonderment I’ll have trouble forgetting, it’s ultimate destination one of self-inflicted humanistic absolution worthy of additional examination. 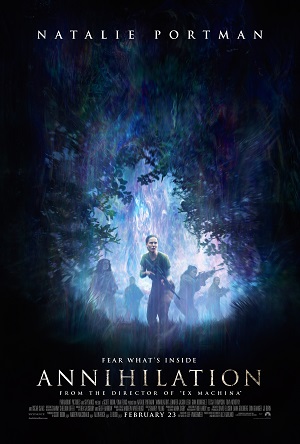