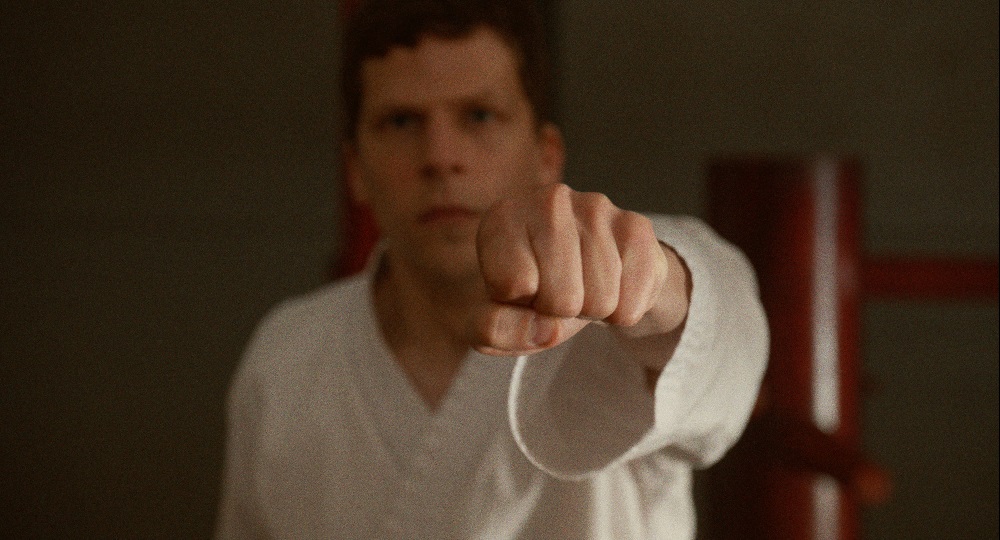 One evening walking home from the grocery store after buying dogfood, Casey Davies (Jesse Eisenberg) is mugged by a small group of motorcyclists. After getting out of the hospital, but not yet ready to return to work, the young man thinks he can quell his unshakable terror by purchasing a handgun. But after passing a local karate school and watching the dojo’s Sensei (Alessandro Nivola) teach a class of youngsters, Casey forgets about the gun and thinks taking lessons from this man might just help him get over his fears and teach him valuable skills that could aid in self-defense.

He is surprised when his initial class is not with the Sensei but is instead with lone female student Anna (Imogen Poots). It becomes immediately clear to Casey that she is supremely talented, and as such does his best to follow her commands as best he can. He also begins to form a strange, somewhat disconcerting friendship with the hyper-masculine Sensei. The karate master tries to teach Casey the importance of gender roles and that the young man needs to channel his fear into aggression, teaching that by doing so he’ll be able to vanquish any foe he encounters no matter how physically strong they might appear to be.

I’m honestly not sure where to start as it pertains to writer/director Riley Stearns deliciously anarchic black comedy The Art of Self-Defense. A follow-up to the filmmaker’s acclaimed 2014 film Faults, this effort is a seriously odd little animal that was never entirely what I thought it was going to be at any given moment. Every time I thought I had what Stearns was doing figured out he’d suddenly take the material into a different direction. He refuses to bow to convention and doesn’t seem to care if his arch, hyper-realistic style might turn some viewers off, unleashing bizarre spurts of ultra-violence just when they are least expected. It’s a crazy, off-kilter little film that slyly grows in significance as it goes along, everything building to a freewheeling idiosyncratic climax that had me giggling and shuddering in almost equal measure.

While not everything works, and even though some of the various plot twist slapped me a little too hard across the face, I think I kind of loved what Stearns did here all the same. He brings up concepts of masculinity, femininity and what it means to exist in-between societal expectations with an introspective wit that is masterful. Casey’s journey of self-exploration is one I couldn’t help but personally relate to, the way he battles through the aftermath of a traumatic event while pointedly deciding to discover new facets of himself he tried to suppress beforehand fiercely resonating with me. There is a profound elegance to the circular majesty of his journey that hits home, his relationships with both Sensei and with Anna feeding into things with an organic simplicity that’s marvelous.

All of this makes the movie a textbook mirror for much of what is happening in society right this very second. Discussions about toxic masculinity and gender identity, about people in positions in power subverting societal norms of decorum to serve their own selfish ends, so much of this tale feels as if it had been pulled directly from a good half-dozen headlines popping up as “Breaking News” every single day. The Sensei’s toxicity is presented in all of its terrifyingly inebriating glory, his charismatic smarm infecting all he comes into contact with in a variety of ways, almost all of them abhorrent. His almost banal approach to his own reptilian evil isn’t without a few perverse virtues, Casey gaining new insights into himself as well as into the human condition as a whole thanks to the Sensei’s increasingly grotesque tutelage.

Eisenberg is sensational. His jittery, straightforward line readings have an obtuse eloquence that fits the material nicely, Casey’s overly-staid demeanor helping augment the more insane plot developments and thematic ideas hiding inside the layers of Stearns’ purposefully peculiar screenplay. Eisenberg plays it all with a cool, even-keeled intensity I was wholly fascinated with, his scenes with Nivola having a carnal expressiveness that only becomes more and more palpable as things go on.

Poots, too, is wonderful, although sadly she’s given far less to do than either of her male costars. Yet the film’s most memorable monologue might just belong to her, and I loved the way Stearns refused to cut away from Anna to see how others might be reacting to the young woman while she’s delivering it. She also shares a relaxed chemistry with Eisenberg that’s notable for how effortless the two of them make it look, all of which allows the film’s final scenes to have a majestic, almost hopeful euphoria that admittedly brought a tear or two to my eyes.

But this is Stearns’ show and I think he knows it. The filmmaker crafts a Whit Stillman meets Noah Baumbach meets Paddy Chayefsky meets Oscar Wilde scenario that keeps the laughs coming, ensures the shocks are imaginatively fresh and never forgets to put its primary character and his development first before anything else. The Art of Self-Defense is a strange little comedy I couldn’t have disliked even if I had wanted to try to do so, Stearns’ latest a gleeful bit of martial arts rebellion I’m excited to see again. 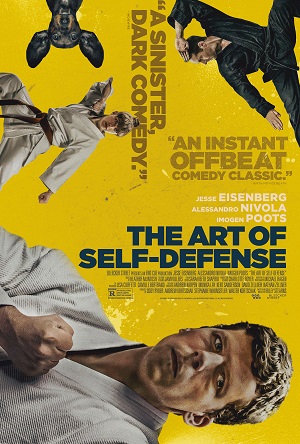