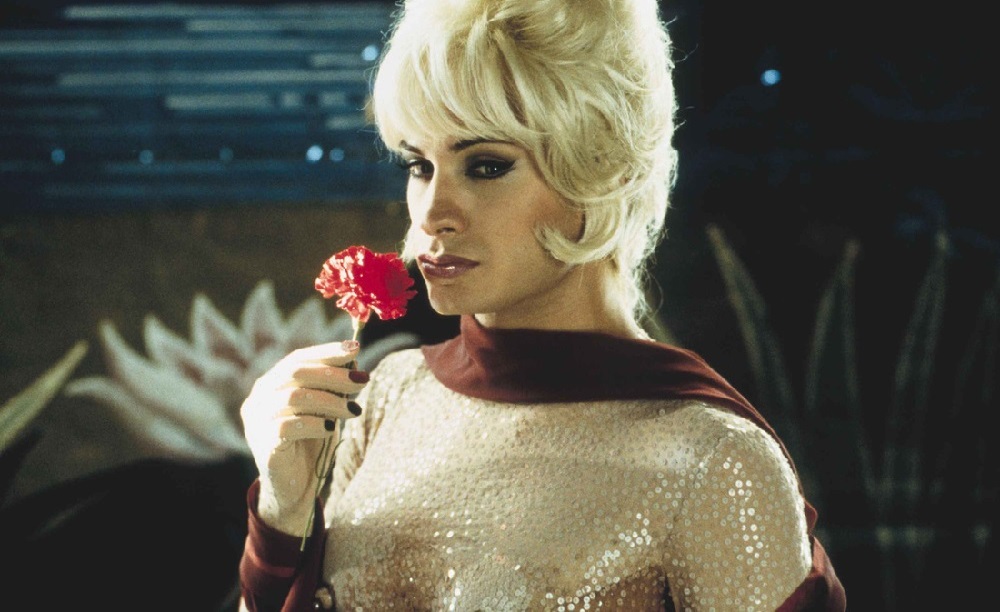 Madrid. 1980. Acclaimed filmmaker Enrique Goded (Fele Martínez) scrounges through the gossip and tabloid pages with his assistant looking for ideas for his next film. Suddenly, in walks a young, disheveled young man claiming to be both an actor and an old school friend named Ignacio Rodriguez (Gael García Bernal). Enrique remembers Ignacio perfectly even though it has been 16 years since they’ve seen one another, and the hairy creature standing in front of him doesn’t resemble these recollections one little bit.

But Ignacio seems to know nearly every detail about their childhood, and he’s captured those recollections in a historically fictional narrative he’s entitled “The Visit.” It is a story inspired by their childhood, recounting in lovingly horrific detail their days at a Catholic boy’s school where they first met, fell in love and were irrevocably separated by their lecherous pedophiliac principal Father Manolo (Daniel Giménez-Cacho). His tale then jumps into a future, fictional story where the young boys are reunited as adults, the youngest and frailest of the two having become a drug-addicted transsexual drag performer with the stage name Zahara. Intent on making the wrongs of their youth right, she returns to the school and visits Father Manolo, attempting to blackmail him for his sins committed a decade ago.

Things only get stranger from there in acclaimed director Pedro Almodóvar’s (All About My Mother) latest imaginative flight of fancy Bad Education, a multi-layered film within a film within a film that doubles and twirls and spins in and around itself like a pretzel searching for ways to wind itself even tighter than it already is. It is a brazen, ambisexual noir that embraces the conventions of the genre while at the same time shattering them with explicit wickedness. A masterwork of character and motivation, the director’s current hot streak begun with 1997’s Live Flesh and continuing through 2001’s Oscar-winning Talk to Her only gets hotter with this daring tête-à-tête of sexual infatuation. Calling to mind the noir’s of Nicholas Ray, Otto Preminger, Billy Wilder, Jean Renoir, Jacques Tourneur and others, Almodóvar has fashioned this story to his own twisted sensibilities, and as such emerges as nothing less than a genius.

Bernal is spectacular. This might be his finest hour, the actor delivering an even more potent and complex performance than he did in The Motorcycle Diaries. Bernal plays three people, each of them sitting deep within the recesses of Juan’s tortured mind. He is the ultimate femme fatale, equal parts Barbara Stanwyck, Jean Simmons, Joan Bennett and Rita Hayworth, using sex as a weapon and as an instrument of corruptive pain instead of as a tool for pleasure. The actor encapsulates this duplicity to perverse perfection, strangely seductive as both the whorishly glamorous Zahara (who has an uncomforting resemblance to a Pretty Woman-era Julia Roberts) and the masculine cocksure Juan. This is a fascinating, multilayered portrayal that is the beaten and battered heart at the picture’s center, Ignacio the driving force behind all of Almodnóvar’s iniquitously Machiavellian twists and turns.

Like the best noir, this thriller is certain to not please everyone. Its enigmatic conclusion reads like 1930s marquee serial cards, and it is hard to rationalize with Enrique’s increasing sexual psychosis where it comes to the riddle of Ignacio/Juan/Zahara. But there is a refined, symmetrical glee to the way in which Almodóvar manages to tie everything together, the plot’s central mystery one I kept pondering for hours after the film itself had come to an end. Visually Bad Education is shot utilizing a complex series of frames, aspect ratios and theatrical artifices, the director squeezing the viewer tight with both hands, squashing the marrow from their bones with his left one while the right gently caresses them to orgiastic bliss. Not since Law of Desire has Almodóvar taken so many loopy, esoteric and erotically-charged chances, all of them fitting perfectly with the perversely playful confines of his narrative’s shockingly personal point-of-view. 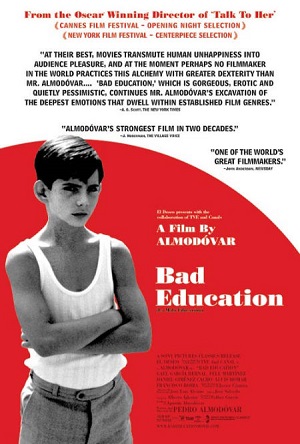