Made for a reported $65,000, there’s a lot to like about director Peter Sefchik’s ambitious Behemoth. This self-financed tale of a single horrifying night of unimaginable horror is a Faustian bargain worth shaking hands with. While plenty raggedy around the edges, even if a lot of this frankly does not work there’s still just enough imagination on display to make Sefchik’s feature-length debut deserving of a look.

Determined father Joshua Riverton (Josh Eisenberg) is willing to do anything to find out what is causing his daughter Nicole’s (Nicole Krasnenko) organs to suddenly fail. Against his wife Amy’s (Whitney Nielsen) pleas, the former salesman for a powerful chemical company decides to look one of his former employer’s top executives, Dr. Luis Woeland (Paul Statman), in the eye and force him to reveal what is poisoning their little girl.

Things do not go as planned. With the aid of his two best friends Keelee (Jennifer Churchich) and Dominic (Richard Wagner), Joshua impromptu kidnaps Dr. Woeland and is forced to take refuge in a rundown secluded hotel when their van develops engine troubles. Not only are they all now being stalked by the executive’s unstoppable bodyguard Azello (Vadym Krasnenko), the trio soon discovers the man they’ve abducted isn’t who he appears to be.

The thing about Sefchik and co-writer Derrick Ligas’ screenplay is that, even with limited resources, the duo still aims for the stars. There are a lot of big themes at play, including ones dealing with loftily complex ruminations on faith, spirituality, self-determination, climate change, free will, fate, parenthood and marriage. They also pack in several creature, makeup and digital effects, all of them designed to augment an overwhelming sense of continual dread that appears to be purposefully stalking Joshua, almost as if it were trying to teach him a lesson for past sins he refuses to take ownership of.

Needless to say, not all of it works. Some of what Sefchik throws up on the screen can’t help but come across as a bit unfinished, maybe even amateurish, and there are moments where I swear I could see the metaphorical duct tape and superglue holding everything together. A few of the performances frustratingly ring hollow, while the twist revealing who has been pulling the strings wasn’t as heart-stopping or as shocking as I hoped it was going to be.

But the director, a visual effects veteran who has worked on everything from Fred Claus, to The Chronicles of Narnia: Prince Caspian, to Avatar, to Thor: The Dark World, knows what he’s doing. He’s an economical filmmaker who makes the most of what’s available to him. Behemoth might not mirror one of those Hollywood blockbusters Sefchik had a hand in crafting, but it sure as heck doesn’t look like a micro-budget indie stitched together by a seven-person production crew and featuring the filmmaker’s next-door neighbor in a primary role.

So don’t expect me to nitpick. This film has a bunch of faults and takes more than its fair share of missteps. But it also displays nearly as many memorable moments of pure unbridled creativity, sequences of bedeviling bravado that forced me to sit up straight in my seat and tip my hat in appreciation. While I have no idea if Behemoth is going to stick in my memory longer than the time it took me to write this review, I do know Sefchik’s name or his talent are items I’m going to be forgetting anytime soon. 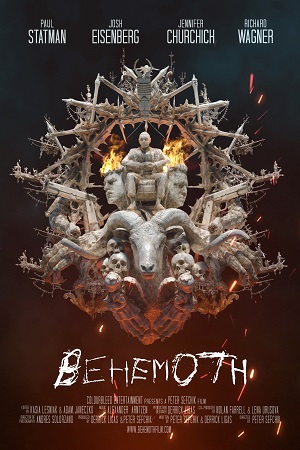