The one thing Being the Ricardos does better than anything else is prove that it is incredibly foolish to doubt Nicole Kidman. When this drama, written and directed by Aaron Sorkin, was announced late last year I had my doubts the vaunted, Academy Award-winning actress would be able to successfully portray legendary comic superstar Lucille Ball. It just felt like a bad match.

This is why preconceptions are bad. Kidman is extraordinary. Not only does she bring Ball to life, she deftly mixes the woman’s public and private personas with such immersive ease I almost forgot I was watching the Moulin Rouge!, The Hours and The Others actor up there on the screen. She vanishes into the role. Her delivery of Sorkin’s snappy dialogue is magnificent, and the overall effect of her achievement is nothing short of magical.

The movie? That’s got issues, not the least of which is the obnoxiously serious tone Sorkin sets. It’s like he’s trying to make a sequel to his short-lived Studio 60 on the Sunset Strip television series, only this one would be the behind-the-scenes I Love Lucy spin-off edition. While that approach occasionally works — most notably when his film dives into the relationship between Ball and co-star Vivian Vance (a superb Nina Arianda) or focuses on curmudgeonly, perceptive actor William Frawley (J.K. Simmons) — mostly it comes across as theatrically staid and emotionally stifled.

On the Sunday night before the first read-through of an episode of I Love Lucy, when radio gossip columnist Walter Winchell announces that Lucille Ball is being investigated as a Communist. If that weren’t bad enough, the next day’s tabloid newspapers are going to report that Desi Arnaz (Javier Bardem) is stepping out on his wife with another woman. Topping it off, Lucy is pregnant, a fact she and Desi were planning on disclosing to executive producer Jess Oppenheimer (Tony Hale) and their sponsors at Philip Morris on Monday morning.

Historically, these events did not take place all at once. That does not mean I begrudge Sorkin his creative license. The idea is to showcase the pressures Lucy and Desi were under as they created and ran their groundbreaking series, so I get what the filmmaker is attempting to do. The issue is that the picture has barely any heart. It’s all zippy patter and witty asides, and while every line is delivered with aplomb by the sensational ensemble cast, in my case, much of it sadly landed on deaf ears.

However, when this film sings, it does so with a passionate determination that can be heard from one end of the theater to the other. The table read sequences crackle with intensity. A moment between Lucy, Vivian, and show writer Madelyn Pugh (Alia Shawkat) on a bench outside the studio is divine in its intimately, astutely rendered femininity. A quiet detour with Lucy and William at a neighborhood bar sharing a drink overflows with unexpected honesty, while a scene where Desi breaks down for a cadre of executives that their pregnancy will be a part of the show and that’s all there is to it had me wanting to jump out of my seat and applaud right then and there.

Which is why it is so unfortunate that so little feels authentic. It’s all staged. The plot mechanics are forced. Sorkin’s building blocks for the narrative are nothing more than a rickety Jenga tower, and the moment one piece is out of place, the whole structure tumbles into ruins. This is especially true right at the end, when the adultery angle is resurrected in the most egregiously annoying manner possible, spoiling a perfectly terrific moment of triumph and reconciliation that transpired only seconds before.

But then there is Kidman. She is marvelous, delivering one of the finest performances of her justifiably celebrated career. Kidman throws herself into the proceedings, her physical ingenuity matching her intellectual spontaneity. This is a fiercely determined portrait of the iconic artist, and the way she brings Lucille Ball to life is astonishing. I was blown away, and it won’t surprise me at all if most who give this film a look feel the same.

Do these positives, coupled with Kidman’s magnificence, make up for the shortcomings of Sorkin’s production? That’s what I thought at first. Unfortunately, Being the Ricardos didn’t sit well with me the longer I allowed it to marinate. Still, there’s quite a lot to love, and there’s no way I can dismiss the entire picture out of hand. But that does not qualify as a recommendation. It’s a mixed bag, and those expecting a comedic sensation along the lines of I Love Lucy will undoubtedly exit the theater disappointed. 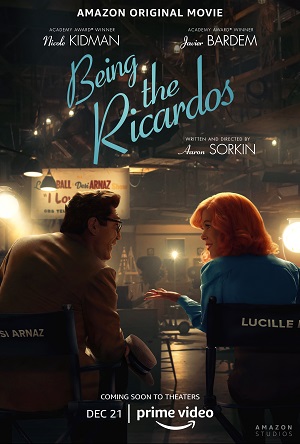