Ben Burns (Lucas Hedges) is home for Christmas. He was not expected. The teenager is currently in rehab and he isn’t there for the first time. It was anticipated he would be there for quite some time before they’d allow him out for a weekend pass to visit friends and family. But he claims his sponsor stated he’d been doing really well taking to treatment this time around and he’d been allowed out for Christmas, and not one to look a gift horse in the mouth his loving mother Holly (Julia Roberts) welcomes him with loving arms. 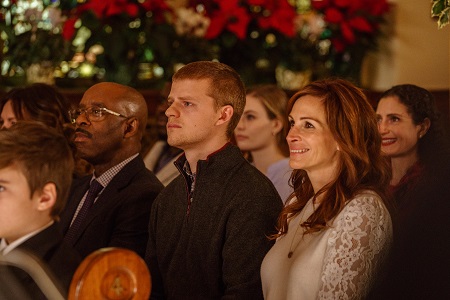 Not that she isn’t going to take precautions. Her eldest daughter Ivy (Kathryn Newton) notices immediately that her mother has gone around drug-proofing the house so her brother can’t give into temptation. While Ben is downstairs playing with his half-brother Liam (Jakari Fraser) and half-sister Lacey (Mia Fowler), Holly is wringing her hands trying to determine if letting her son stay for Christmas is truly a good idea. When her husband and Ben’s stepdad Neal Beeby (Courtney B. Vance) gets home, he is also leery as to whether or not letting the boy stay, no matter how healthy and mentally stable he appears, is for the best. Nonetheless, they all decide to attend church as a complete family for the first time in ages, agreeing they’ll decide what to do next after they see how this initial outing goes.

This is the setup to writer/director Peter Hedges’ (Dan in Real Life) suburban drug addiction melodrama Ben is Back, and in a twist that will likely surprise no one things don’t exactly go smoothly for the Burns-Beeby family over the Christmas weekend. It’s the second story in just as many months to chronicle a wealthy suburban Caucasian clan dealing with a son battling drug addiction. But even though Beautiful Boy is the title with the Oscar buzz (mainly for Timothée Chalamet’s supporting performance) make no mistake, this is the superior effort. Roberts and Hedges (the director’s son) give superlative performances, while the first half of this story is strikingly powerful in an intimate, heartfelt manner that’s sublime. I liked this one a lot, and if not for a lumpy third act it’s possible I’d have considered this to be one of 2018’s best motion pictures.

Everything from Ben’s surprise arrival at the Burns-Beeby home to moments just after the family leaves the church are sensational. There are a number of fascinating, emotionally gritty conversations that take place between any number of the characters in various combinations at any given moment. Holly’s elation when she sees her son unexpectedly standing by her doorstep is breathlessly authentic, but so is her fear and worry as she then scurries through the house hiding any substance casually lying around that might inadvertently trigger a relapse. Ivy’s reactions are also pure. Her anger. Her happiness. Her joy. Her frustration. All of that rings true, and I loved how Newton so easily transitions between these varying emotive states as her character tries to reconcile the love she has for her brother with the rage that he’s so horrifically let the entire family down so many times in the past.

All of the above is what helps make the scene during the Christmas Eve church service all the more affecting. There are so many reactions happening throughout the sanctuary and not just from the members of Ben’s family. It’s obvious that his substance abuse problems are not a well-kept secret, and it’s interesting to see the looks sent his and Holly’s direction. But couple that with the way Ivy looks at her brother as she is up on the stage singing her solo and the way he looks back at her and the innocent purity of the moment cannot be denied. Director Hedges juxtaposes all of these happenings beautifully, this entire scene achieving an elegiac grace that I found divine.

If only the stuff that happens after the family returns home from church rang with such spellbinding truthfulness. It is at this point Ben is Back stumbles somewhat. Not a lot, mind you, but enough to be moderately frustrating. Turns out some of the people that have learned Ben has returned to celebrate the holiday with his parents and siblings aren’t too happy about that. In fact, they feel as if he owes them a debt, and so they break into the house and kidnap the family dog, what they intend to do with the animal now that it is in their possession being anyone’s guess.

It is here the movie becomes something of a minor mystery. Ben and Holly head out into the night to look for the dog, the former afraid to have his mother tag along as he worries for her safety while the latter understandably refuses to let her son out of her sight in fear the stress of what is happening will trigger a relapse. While both Roberts and Hedges are strong, the narrative convolutions during this portion of the film can be annoying. The contrivances required to send both characters down their individual paths don’t always feel honest, and I began to worry that this was going to turn out to be one of those films that offered up a strong first two-thirds only to come up disappointingly short as far as the climax was concerned. 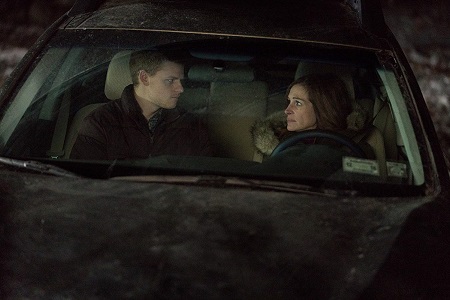 That this doesn’t happen is a testament to just how outstanding both Roberts and Hedges are. The latter, already having delivered strong performances this year in the otherwise underwhelming Mid90s and Boy Erased, is flat-out incredible. Hedges disappears into Ben, the jittery physicality of his portrayal of an addict trying to regain control of his life undeniably compelling. As for Roberts, her performance as Holly is arguably right up there with her Oscar-winning work in Erin Brockovich. I love how she doesn’t sugarcoat what is happening, that she allows this determined woman to sometimes say the wrong thing but to do so with the affectionate tenacity of a mother trying to figure out how to take care of a suffering child who might tragically be beyond saving. The emotional layers of what Roberts brings to the table are immense in their complexity, and in many ways I was reminded why it was I became so enamored with the actress in the first place back in the late ‘80s and early ‘90s thanks to Mystic Pizza, Steel Magnolias and Pretty Woman (not to mention the criminally underrated Sleeping with the Enemy).

Director Hedges rights the ship with a last scene that stopped my breath cold. Some will be upset by what happens, the filmmaker content to send his story out on something of an open-ended note where plenty for both Ben and Holly is left dangling unresolved. But the honesty of what happens, the choices the two characters make, a lesser movie would have gone in a completely different, far more audience-friendly direction. But Hedges isn’t worried about that. He’s only interested in the truth, and on that front Ben is Back excels, and while healing for the Burns-Beeby family remains a possibility as anyone who’s dealt with a loved one fighting addiction knows the road to recovery is a constant battle, one where success and failure walk continually hand-in-hand. That understanding helps make this movie memorable. It’s also what makes it worthwhile. 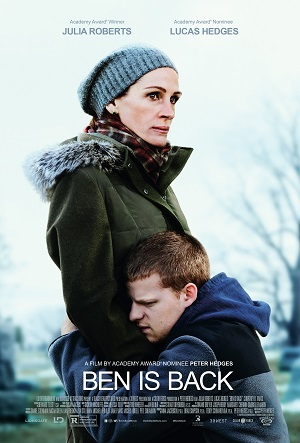