I have never watched an episode of Bob’s Burgers. I’ve seen snippets here and there. My sister and her kids love the show, so I’ve certainly heard first-hand how wonderful it is. I know the long-running animated program has a devoted following who will sing its praises whether you invite them to or not. But I have no idea what the fuss is all about, and, if I’m being honest, I think that’s perfectly fine.

Based on my reaction to The Bob’s Burgers Movie, though, maybe I need to rethink that last statement. There is something undeniably wholesome about this animated motion picture, the warmth, love, and positivity that it exudes filling my soul with joy even if some of the references and inside jokes were flying over my head. I had a terrific time getting to know these characters and spending a good 100 minutes or so inside their world, and I’d make a return visit with no hesitation whatsoever.

Bob Belcher (voiced by H. Jon Benjamin), his wife Linda (John Roberts), and their three children Louise (Kristen Schaal), Tina (Dan Mintz), and Gene (Eugene Mirman) live in a small apartment above their eatery, Bob’s Burgers, on a busy street just across from an amusement park, Wonder Warf. They have one week to pay back a bank loan or else their kitchen equipment will be repossessed. But when a giant sinkhole opens up in front of their diner, Bob worries they’ll never sell enough burgers in time to make the required sum.

Both their building and the Wonder Warf are owned by the wealthy but flighty Calvin Fischoeder (Kevin Kline). Bob and Linda still think they may be able to convince him to let them be late with the monthly rent to help ease their financial burdens. Problem is, when the remains of a murdered carny are discovered in the sinkhole, their landlord becomes the primary suspect. Convinced of his innocence, Louise, Tina, and Gene take it upon themselves to clear Calvin of the crime, diving deep into the carny world in an attempt to unmask the actual killer and save their family business.

This is irreverent silliness turned up to eleven. The gags come in never-ending waves, one after the other, with a visual and verbal freneticism that’s almost overwhelming. But they do not come from a place of vitriol or anger. The film never punches down. Writer Nora Smith and fellow series creative stalwarts Loren Bouchard and Jim Dauterive make sure their humor, no matter how pointed, even when dripping in absurdity and laced with acidic gleefulness, always comes from a place of warmth and tenderness.

That’s what is most shocking. The stress Bob feels over potentially losing his business is real. The anxiety Louise has over being called a “baby” by her classmates and being made fun of for wearing a bunny-ear stocking cap and longing to prove herself “brave” is genuine. The prepubescent pangs Tina is dealing with over her feelings for a boy in her class are uncomfortably and all too sincere.

These are authentic stresses, and in lesser filmmaking hands, they would have come off as facile and intended to ridicule their intended targets. Instead, these moments build and strengthen character. They make the interactions between the Belcher family members comfortably and complicatedly genuine, and by the time they’re huddled together, contemplating their next move in a moment of unexpected peril, I never worried that something catastrophic would befall any of them as long as the clan continued to work together as a loving unit.

This is only the tip of the iceberg, and there’s some sort of visual or auditory lunacy (or a clever combination) during every second of the running time. There’s a spectacularly loopy musical number that seems to go on forever — yet not in an annoying or obnoxious way. An extended bit in which Bob and Linda — the latter wearing a bikini-clad giant burger costume — hit the Wonder Warf boardwalk with a haphazardly constructed food truck is goofily marvelous.

For fans, I can only assume that The Bob’s Burgers Movie will be an instant favorite. But the film works splendidly whether or not viewers are intimately familiar with the Belcher family. There is a loving, nonjudgmental grace to this smorgasbord of animated nonsense that’s simply delicious, making it as scrumptious a surprise as anything I’m going to sink my teeth into for the remainder of the year. 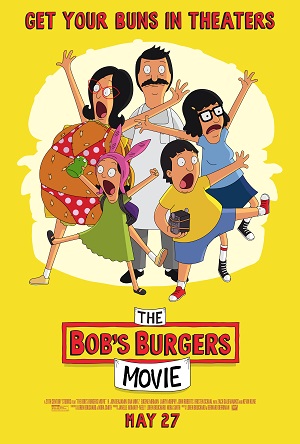