The claim to fame for the tiny Irish township of Six Mile Hill is that it is the fabled gravesite for Abhartach. Local lore is that this demonic villain was the true vampire that inspired Bram Stoker to write Dracula. But to developer Francie Moffat (Nigel O’Neill), this burial mound is nothing more than a pile of old stones. When he’s contracted to remove them to prep the land for some new construction, that’s exactly what he intends to do.

Chris Baugh’s (Bad Day for the Cut) raucous Boys from County Hell is a delightfully goofy horror-comedy filled with its fair share of blood and guts. It also balances a big heart with a handful of large laughs, and while it never reaches Grabbers levels of greatness, the film still left a smile planted upon my face long after it had come to an end.

While it takes a little while to get there, ultimately this is a father-son tale told through the lens of a supernatural menace threatening to wipe out all of Six Mile Hill. For reasons left suitably vague yet still made clear enough to easily comprehend, Eugene Moffat (Jack Rowan) is estranged from his dad Francie. His nightly visits to the local pub make it readily apparent he’s unhappy to be back working for his father, and his orders to destroy Abhartach’s supposed resting place are just the tip of a massive iceberg that has left the two at odds for quite some time.

Baugh does have some trouble integrating his game ensemble into the proceedings, but Louisa Harland and Michael Hough do make memorable enough impressions, especially during the climactic act when things take a decided turn for the gruesome worst. The film also isn’t quite able to sustain its humor for long periods, and I got the feeling the director felt more at home orchestrating the dramatic and the horror sequences than the comedic ones.

But the laughs he does deliver are substantial, especially during the more outlandish sequences of eye-popping violence and mayhem. He also crafts a strong human story for Eugene and Francie. As mentioned, their relationship is the beating heart at the center of all this ghoulish craziness. They have to find a way to reconcile their past if either of them is going to save the town from being sucked dry by an undead monster, and it’s the way they are forced to work together that helps make Baugh’s uncouth and ribald vampire flick resonate.

It should also be noted that the creature effects are excellent. Baugh waits until the very end to finally unleash Abhartach in all his fearsome glory, and I must say his appearance is well worth the wait. This is one of the best vampire designs in recent memory, and the first time this demon stepped fully into the frame I’m not exaggerating when I say that chills instantaneously ran up and down my spine.

There’s not a heck of a lot more to add. Boys from County Hell is wild, ridiculous and not without its oddball out-of-left-field moments that don’t necessarily fit comfortably inside this genre-hybrid shell. There are some noticeable pacing issues, especially early on, and many of the supporting players do not get the opportunity to fully flesh out their characters in ways that might make whether they survive the night something worth worrying about.

But Baugh delivers on the horror aspects. Better, he also brings the dramatic ones home with somewhat surprising emotional ferocity. This comedic Irish take on vampire mythology has bite, and that’s all there is to it. 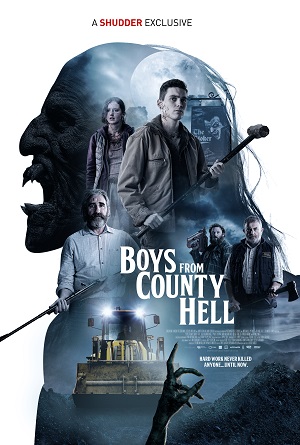