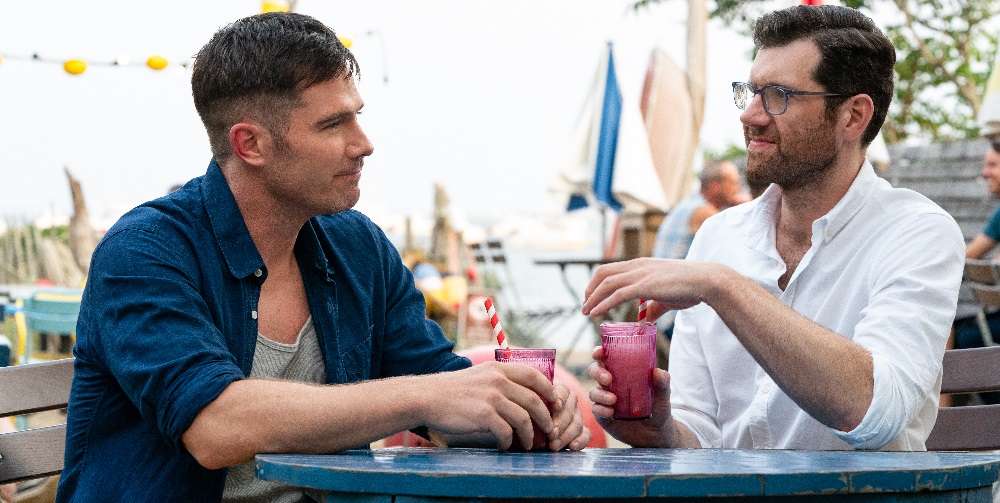 As pleasantly charming and laugh-out-loud funny as it may be, if not for the impressively diverse makeup of its talented cast — all long overdue for a spotlight from a major Hollywood production company (in this case Universal Studios) — the romantic comedy Bros would be instantly forgettable. Nicely helmed by veteran filmmaker Nicholas Stoller (The Five-Year Engagement, Neighbors) and anchored with charismatic panache by stars Billy Eichner and Luke Macfarlane, this is nonetheless a strangely rudimentary genre effort.

Lifelong New Yorker Bobby Leiber (Eichner) is the 40-year-old host of a popular podcast and the director of the soon-to-be-opening (if they can raise the final $5 million needed to complete construction) National Museum of LGBTQ+ History & Culture. He does not believe in monogamous relationships, having seen too few of his Queer brethren make lasting connections. Bobby will stick to hooking up with random men via Grindr and the like, stating to all his close friends and co-workers that he’s perfectly content and none of them should worry.

At a late-night party, Bobby runs into preternaturally hot Aaron Shepard (Macfarlane) — who has the physique of a comic book superhero — who is also an exceedingly empathetic lawyer specializing in helping wealthy clients put their wills in order. The two hit it off, engaging in random conversations that seem to be leading somewhere, only to mysteriously have it all end mid-sentence, right when things were getting interesting.

But Bobby and Aaron keep seeing one another, and neither knows exactly why. As the days rapidly transition into months, each wonders if there’s something more going on between them than they surmised.

While taking pages out of Annie Hall, When Harry Met Sally…, and The 40-Year-Old Virgin, the only thing that Stoller and Eichner’s script does that is even remotely unexpected is to center its romance on two Gay men and fill the entire supporting cast with LGBTQ actors off all shapes, sizes, ethnicities, and backgrounds. This is nothing to scoff at or minimize. Representation on this scale makes an impression, and I sat in my seat dumbstruck by the sheer volume of talent given the freedom to be themselves, make characters their own, and cinematically exist outside of being “Gay” or “Lesbian” or “Trans” or “Bi” or anything else that makes up the colorful pageantry of Queer expression and exceptionalism.

What makes it so frustrating is that none of these individuals — portrayed by the likes of Eve Lindley, Dot-Marie Jones, Miss Lawrence, Ts Madison, Jim Rash, Guy Branum, Jai Rodriguez, and the great Amanda Bearse — never register much further beyond how they fill up the world Bobby and Aaron inhabit. As glorious as it is to see them, as wondrous as certain moments may be, they barely leave an imprint on the central narrative, frequently disappearing into the background entirely at the most inopportune times.

It does not help that, at almost two hours, Bros come perilously close to wearing out its welcome, especially during a tedious stretch right before the film enters its final act. Stoller lets things play out at a languidly obnoxious pace. Expositional beats are repeated when they do not need to be, while the requisite roadblocks that will keep Bobby and Aaron from happily losing themselves in one another’s arms are eye-rolling in their bombastic, heavy-handed didacticism.

Yet Eichner and Macfarlane are wonderful together, and it’s sublime to see male sexual attraction and displays of affection presented with such raw bluntness in a large-scale, major-studio production. There should be nothing shocking about the images Stoller fastidiously composes for the audience to take in. But because it’s two guys ripping one another’s clothes off or quietly snuggling in the afterglow of their energetic bedroom acrobatics, it’s a foregone conclusion there will be those who find it so — and that’s too bad. The film is genuinely sexy, and there is authentic heat whenever Eichner and Macfarlane lustfully embrace.

Bros deserves credit for all of this and more. The film does entertain, and my laughs were loud and hearty on multiple occasions. I just wish Stoller and Eichner had made an attempt to dig a little deeper and create a world for their two lovesick characters that did as much to shatter genre clichés as it does to showcase a sex-positive LGBTQ world that mainstream Hollywood has done its best to stereotype, minimize, or flat-out ignore for far too long. 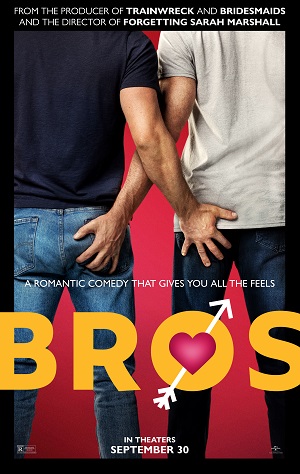